With just 20 cows, Ridge Shinn is not running your typical cattle operation. Even his base, Hardwick, Massachusetts, is more than a little off the beaten cow path. Despite this, many are beginning to consider Shinn a force in New England's beef industry. He believes he has identified a way to consistently produce high-quality grass-fed beef. It's a pattern, a recipe of sorts, that all producers in his collective group will follow. The goal is a steady supply of desirable, tender and tasty grass-fed beef for a growing market.

No geneticist or multigenerational rancher, Shinn has organized a group of investors and grass-fed beef producers who will collectively harvest and market as many as 5,000 head of top-quality grass-fed cattle annually under the name Big Picture Beef. Meat from the group will sell directly to food companies, customers and institutions in the region.

At its heart, Shinn is promoting a hybridized cooperative sales platform centered around an idea he calls "aggregate marketing." It's a game changer, he believes. Shinn explains the concept means bringing together high-quality, grass-fed animals from a producer network to provide a significant and sustainable supply.

"Beef producers will want to take part in this plan, because my partners and I will handle processing and distribution. Producers can still 'build their brand' with customers," Shinn says. "Indeed, producers will be required to go into stores one weekend each year to directly interact with customers. At the end of the day, they'll make more money by participating in this plan."

Shinn says to date, five farms in the New England and New York area have agreed to provide a minimum of 1,000 acres each, where cattle in the program will be finished. Animals will move directly from these finishing farms to harvest at Vermont Packinghouse, in Springfield, Vermont. The USDA-approved facility will initially handle about 40 animals from Shinn's group each week, with that number growing to 80 head each week over time. Shinn says 30 producers had agreed to take part in the program.

Reaching this launch point has taken Shinn across the United States and around the globe. He started with the belief that a producer network could be built to sell a variety of organic meats. But, it soon became apparent product consistency would be an issue.

"In evaluating some grass-fed beef produced in the New England area, I found the taste and quality to be very inconsistent," Shinn says.

He worked with regional grass-fed beef producers to understand how grazing methods and genetic traits affected meat quality, and sampled meat from multiple producers to assess and compare tenderness and flavor. The game changer came when Shinn was introduced to the use of ultrasound as a way of assessing live carcass traits. He realized then he had the necessary tool to consistently select fat, tender grass-fed cattle prior to harvest.

The entrepreneur quickly found that cattle producers weren't going to jump onboard the ultrasound bandwagon. "I found out fairly quickly that grass-fed beef producers weren't going to allow us to come into their herd with an ultrasound machine and cherry-pick their best animals," Shinn says. "I knew then I needed to identify a genetic prescription necessary to produce high-quality grass-fed beef. I started by reviewing carcass reports from grass-fed cattle known to produce quality meat."

Shinn says his research revealed the Devon breed to be an easy-fleshing leader in carcass quality. One of the oldest breeds in existence, the Devon is native to southwestern England. Once a dual-purpose breed (milking and beef), it has mostly evolved to be a meat breed.

As Shinn visited American Devon beef farms, he found the high-quality cows he expected. However, he thought Devon bulls lacked the intramuscular fat and tenderness necessary to produce satisfactory commercial calves for a grass-fed operation. His next step took him halfway around the world.

"I sent a friend to New Zealand and Australia to search for better-quality Devon sires," Shinn says. "Beef producers in both those countries are known for high-quality grass-fed beef. We found what we were looking for in New Zealand, the Rotokawa Devons."

In 2008, Shinn imported 87 of McDowell's cattle to the U.S. His goal was to produce Devon bulls that could provide semen for selected cows in his meat program. Once he determined what basic traits resulted in consistently high-quality grass-fed beef, Shinn trimmed the herd back to 20 cows—enough, he says, to help him stay in touch with breeding and grazing elements of his program.

To participate in the regional grass-fed program, Big Picture Beef (www.bigpicturebeef.com) and sell through Ridge Shinn's marketing group, a producer's cattle must have:

• been born, raised and finished in the Northeast

• a verifiable history (including breed, age, movement, veterinary interventions and birth date) to accompany them to the processing plant

• remained on dam's milk for a minimum of 60 days, with no milk replacements allowed

• only eaten (once weaned) grass, legumes/forbs, herbs and/or stored feeds made from grass and legumes (hay/haylage)

• all veterinary treatments recorded and available for inspection

• received no antibiotics, hormones or pesticides

• been handled according to Animal Welfare Institute standards

• a minimum of 3.2% intramuscular fat

• traceability, as a fabricated carcass, back to farm of origin 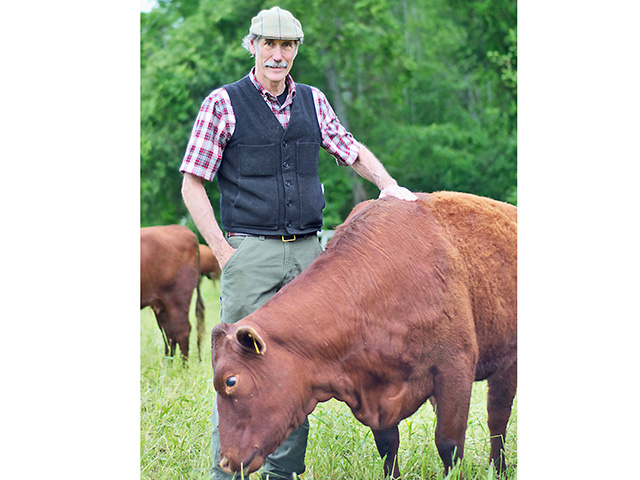