LAS VEGAS, Nevada (DTN) -- Ram took its time on the 2023 CES main stage to introduce its Ram 1500 Revolution, battery electric pickup. This was a concept Revolution, but Ram promises production models will be announced later this year.

The CES, once known as the Consumer Electronic Show, is an annual assemblage of technology from all over the world. This year's show drew 3,200 exhibits and 170,000 people.

In addition to the Ram Revolution, DTN/Progressive Farmer also visited with Cenntro Electric at the CES. Its exhibit featured its unique off/on road truck, the TeeMak. It's an interesting vehicle design, kind of a stubby truck with a wire panel brush guard protecting the windshield. There is easy access to the sparse, two-seat cab with a digital display.

The 78x61x16-inch cargo bed is rated to carry 2,204 pounds of storage off road and 600 pounds on the highway. The cargo bed sides fold down for easier access. Cenntro offers a hydraulic option for the dump bed.

The TeeMak runs on a lithium battery at speeds up to 34 mph off-road and at the 25-mph limit set by law for vehicles of this size and capacity. Range is 47 miles and it is recharged by 110-volt outlets in about 8 hours.

See a video presentation for both trucks at https://www.dtnpf.com/…

The full-size Ram 1500 Revolution is to join a half-dozen other battery electric vehicles (BEV) manufacturers have announced, including the Ford F-150 Lightning and the Chevrolet Silverado.

Know that the Ram displayed at the CES is a concept, and not available for purchase. But its many features shown at the CES, high tech and not, frame designed for its large battery pack and its electrical propulsion design gives future buyers a peak behind Ram's development curtain.

Ram Revolution concept features an all-glass roof (tint altered with the swipe of a finger) and high-end technology touches -- 28 inches of connected touch screen space on the dash and a heads-up display. There are unique cargo/passenger spaces for up to six passengers, including a pair of folding jump seats stored in the mid-liner dividing passenger cabin from bed. The Revolution holds 18 feet of storage running the length of the truck, from the bed to the frunk in front. (An explanation: There is newly available cargo space in BEVs where the engine was once mounted. Industry insiders call that space the frunk.)

The Revolution Concept is powered by two electric drive modules (EDMs) on the axles and features all-wheel-drive and all-wheel steering with up to 15 degrees of articulation. The concept sports 24-inch wheels and huge 35-inch tires.

Ram promises that details any truck owner would want to know -- such as cargo capacity, towing and torque -- will come later this year. Although, in terms of slow-speed torque, there is no dispute that BEVs hold an advantage over gas-powered vehicles.

Neither is Ram talking about price. But we can look to other BEV pickups for some logical guidance. The highly sought Ford F-150 Lightning electric truck ranges in price from the Pro model starting at $56,000 up to the Platinum model, is starting at $97,000. Ram's Revolution will likely be knocking around that price range.

Next to price, range would be something the BEV-skeptical ag market might want to know. Ford Lightnings are rated at 230 miles on a standard battery and 320 miles with an extended battery.

Ram has talked in the automobile press during the past year about 500 miles of range with its BEV-specific Ram platform (with hints of a gas-powered engine extender). The Revolution's large frame accommodates a large battery pack for extended range. Of course, range is a function of use, off-road or on-road, load and towing. At the CES, there was talk of the range extending fuel-powered engine. But Ram officials would not confirm it, preferring to keep the focus on an all-battery vehicle.

Ram has vision for features that ought to tease the interest of farmers and ranchers:

-- The Revolution has a follow me "Shadow" feature. At the command of the operator, the truck will follow autonomously.

-- There is that 18-feet of storage front-to-back cargo space. Ram's concept shows spaces that can be configured into one long storage space from the back of the closed bed all the way forward into the frunk. 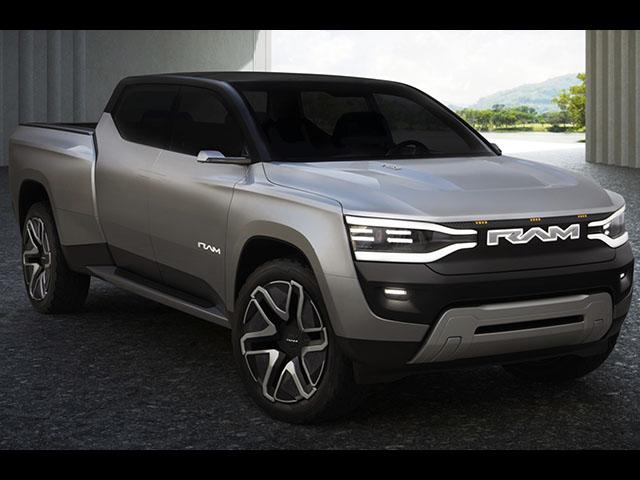