BOONE, Iowa (DTN) -- The engineers at ag technology firm Solinftec are planning to tackle spraying and scouting a little like the way painters attack the Golden Gate Bridge in San Francisco. They never actually finish painting, and by the time one section is completed, another is always ready for a new coat.

Solinftec is bringing its autonomous ground sprayer and scout to the market with the same thought in mind. Whereas many conversations about new sprayers and sprayer technology focus on acres the equipment can manage in an hour, Solinftec's machine makes no such promises. Its ground sprayer, introduced in the United States in late August, will manage 500 acres -- not in an hour or even a day, but in a week. Then, like the paint crews on the Golden Gate, it starts over, running 24 hours a day, seven days a week.

The company first introduced a ground-based autonomous scout, then followed up recently with the sprayer. Both variants use the same chassis, a unique-looking machine that bears little resemblance to anything else in your average field in 2022. Imagine an overgrown square folding card table, complete with wheels attached beneath spindly legs and a solar-panel-laden flat top.

Those solar panels produce enough energy, pointed out Leo Carvalho, Solinftec's director of operations, that the machine doesn't lose any charge when the sun is up, and it banks enough in batteries to continue running when it's not.

"There's a new bug in the field," Carvalho said, grinning. "It's a technology bug. ... You can leave the robots out there, and you don't need to worry about it."

It helps that the device has modest speed goals. The scout can knock out 1,000 acres in a week, soaking up in-field data with a bevy of sensors, including cameras designed to hang beneath the plant canopy to provide views an autonomous aerial drone might never get.

"The idea is this robot will be able to scan the field plant by plant," said Daniel Padrao.

Padrao was Solinftec's COO and spoke at the World Agri-Tech Innovation Summit in San Francisco in March before leaving the company in June.

The sprayer version moseys at half the pace of the scout, hauling along a 12-gallon tank and a 40-foot boom. There's no shortage of sensors there, either, as the goal is to spot spray the field, identifying trouble weeds early and fixing them before they become real problems. Carvalho estimates the sprayer would need to be refilled every three to five days.

More modifications could await in the future, including equipment to spread nitrogen.

The data the team is gathering from scouting robots has already opened its agronomists' eyes.

"It's hard to explain how much it changes," Padrao said of the new data dump. "It's been amazing how much we've learned just about insects, tracking and watching them. It's amazing how much everything changes when you track everything and you're there all the time."

The scouting platform scans for many things, including insects -- where Solinftec claims a 30% reduction in insecticide use -- and disease.

"The thing we're most excited about is having a totally different level of information for decision making," he said. "You will make decisions much faster because you will see what's happening, you're following what's happening. We can improve the mechanics. We can improve the size and the camera, but we are proving this concept that the decision-making process will change drastically. That's what excites us."

Solinftec has sold out of the machines it plans to have ready for spring of 2023, 30 robots going to farms in the United States and Canada for an average of $30,000 each. It hopes to crank out 50 more robots next year in the United States, then 3,000 in 2024 when a slow-rolling card table on wheels may not be such a unique sight in a field.

"The sprayer will see and apply the product. With this simple solution, we can save problems and the fuel consumption because it's an electric robot," Carvalho said. 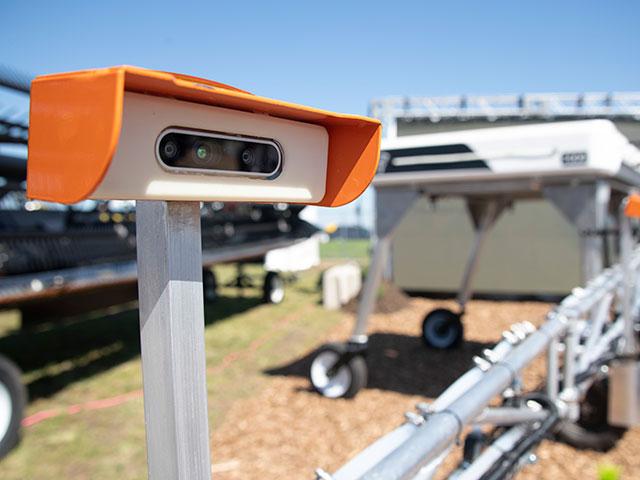