HARVARD, Ill. (DTN) -- As Dave Geils watched his AGCO Challenger pull a high-speed disk across a recently harvested cornfield without a driver in mid-November, a couple thoughts crossed his mind.

Geils realized that embracing autonomous agriculture will help him meet a goal to make the family's farm based in Harvard, Illinois, more efficient and sustainable. "We're trying to grow autonomously because labor is a huge issue. It's my belief that it's a viable solution," he said.

Secondly, Geils was relieved the police didn't show up.

Sabanto, a Chicago-based robotic farming company, outfitted Geils' tractor with its autonomous technology. Craig Rupp, founder and CEO of the company, said law enforcement has responded to fields that his driverless tractors have worked in on three occasions since the company began offering autonomous custom farming services to farmers in 2019.

"People call 911 thinking the farmer fell off the tractor not knowing what's going on," Rupp lamented. "When police arrived, they realize someone is there with a computer monitoring it."

Sabanto's autonomous fleet consists of four 60-horsepower and four 90-horsepower Kubota tractors with various implements that it hires out to do a myriad of farm work, ranging from planting and tillage to cultivating and mowing. If people were concerned about small driverless tractors, just imagine what a passerby would think if they saw Geils' large 160-hp Challenger running on its own. Or, a monster four-wheel-drive machine with four times the power operating in a field without a person behind the wheel.

Police calls about driverless tractors may occasionally occur, at least until the technology becomes more commonplace, as Sabanto expands its business model. The farming-as-a-service company will soon install its autonomous technology in tractors that farmers own, no matter the size or brand. Sabanto will also train farmers or farm employees to remotely operate autonomous equipment.

Geils Farms is the first row-crop operation to work with Sabanto in this new endeavor. The company, with the help of Geils, is working to perfect the transition from working solely with its own equipment to farmer-owned machinery and assisting nonemployees to operate it.

Sabanto helped Geils Farms work out the bugs in the system and troubleshoot some technology issues when tillage started in the fall. By mid-November, Geils Farms was able to autonomously till a 120-acre field nonstop without assistance from the company.

Geils said learning how to create and upload path plans into the tractor's computer and operate and monitor it wasn't as difficult as expected, given the amount of technology already in farm equipment. He added Sabanto's software wasn't the problem, but the quirks with the tractor. Every issue was handled, which gives Geils confidence about the future of autonomous operations.

"As we get everything figured out, then we'll move on to more things," Geils said. "My goal is to have this machine (autonomous Challenger) plant soybeans and winter wheat as well."

Rupp is confident Sabanto will start scaling up installations of its technology in farmer-owned tractors in 2022.

"There's a large population of farmers, like Dave, who want to be on the leading edge of agriculture," he said.

In the meantime, Sabanto's fleet of Kubotas are covering more acres every year. The company initially worked hundreds acres with one or two autonomous tractors in the same field. In 2021, thousands of acres were contracted with farmers. At times, six tractors worked simultaneously in multiple fields.

Sabanto was hired to do all the fieldwork on a 1,000-acre organic farm and a 750-acre conventional farm in 2021. Harvesting was the only thing not done autonomously.

"I get inundated every day with calls from people who want to farm their ground autonomously or me to automate their tractor," Rupp said.

Sabanto bases its custom farm rates on the annual Iowa State University Extension Custom Farm Rate Survey. The average planting rate in 2021 ranged from $20.66 to $24.55 per acre, depending on planter equipment and technology. Vertical tillage averaged $18.45 per acre.

Rupp said customers who want Sabanto autonomous hardware and technology installed in their tractor(s) will lease the equipment. An annual fee has not been determined, he said.

Working the land with autonomous equipment, according to Geils, solves a host of problems he and other farmers face. Labor shortages top the list.

Geils Farms is a row-crop operation totaling nearly 20,000 acres in Illinois and Wisconsin. The farm, which has 15 full-time employees, is about 70 miles from Chicago and much closer to its suburbs. Keeping a full staff isn't always easy.

"There's a lot of competition for employees from construction and manufacturing, so I have to pay more for labor than farms in central Illinois -- probably 30% to 40% more," Geils said.

Autonomous technology allows Geils or an employee to operate a combine or shuttle grain from a combine to a semi while monitoring a driverless tractor pulling a tillage tool from their smart phone. It helps ease labor worries and boosts efficiency since multiple farm tasks can be done with the same number of people or less.

Geils said more acres can be covered in a day using autonomous equipment since, unlike humans, machines don't need a break because they're tired. In the future, he could use smaller, cheaper equipment to get the same amount of work done that his larger equipment does now. That may solve another worry about ensuring the farm remains financially sound to be able to pass it down to his kids and future generations.

"I can see multiple autonomous tractors in my future," Geils said. "It's about lowering the cost of production ... and the bottom line."

Learn more about autonomous agriculture and watch the technology in action: https://www.dtnpf.com/…. 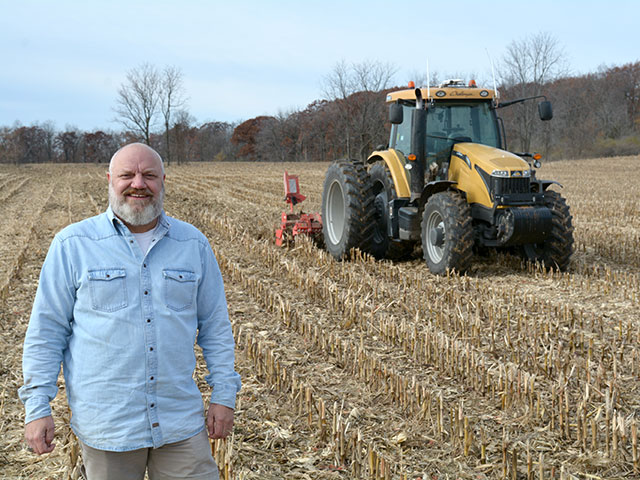