STEAMBOAT SPRINGS, Colo. (DTN) -- Josh Ruiz invests in technology because there simply isn't more labor to be had, he said.

The vice president of agriculture operations for Church Brothers Farms in California's Salinas Valley, the "Salad Bowl of the World," Ruiz said he has 10 employees to do the work of 20. The crew he can hire is stretched thin trying to get two and sometimes three crops off the land each year between Easter and Thanksgiving.

No-till is no option here, and that often means graveyard shifts preparing the fields between crops.

"We don't plant anything until the dirt and the bed are perfect," he said.

So when he came across Bear Flag Robotics and its promise of autonomous tractors for tillage, he jumped at the opportunity, not to save money by laying off some crew, and not to secure an afternoon at the beach for himself, but simply to keep up.

"I told them, 'Show up at my ranch and show me what you have,'" Ruiz said. "They showed up and immediately I could see the vision of where this would be beneficial and save us money."

Bear Flag is heading into its second full season of offering its autonomous tillage as a service, the start of what it hopes is a new wave of technological innovation in agriculture.

The company fits a sensor- and camera-laden kit onto existing tractors. So far, that's mostly been John Deere 8RT models, though more options for other brands are in the works. After having a person map out a field and its potential hazards, the tractor can pull an implement to get the job done.

Bear Flag recently announced a $7.9 million seed extension funding round and has raised $12.5 million since it was founded in 2017. As excited as the company may be for that, it's more excited that its technology is already drawing customers.

"The real story is we're a seed-stage company and we're making money," Bear Flag farming operations manager Daniel Carmichael said. "To be an ag startup and be making money is a big deal, probably a bigger deal than any amount of money we've raised, and it shows there's a massive audience for this technology and a willingness to adopt it."

Bear Flag spent 2019 testing its technology, then in 2020 began taking paying clients, charging roughly $20 an acre for custom tillage. It ran five tractors through the season and worked with about a dozen customers.

For now, the benefits of autonomy haven't been fully realized, at least in California, where the law prevents the machines from running by themselves. Each still has a handler onsite when it's in operation. The situation is different in Arizona, the other state where the company is currently operating.

Bear Flag hopes to clear the licensing and legal hurdles soon, allowing one employee to monitor at first two or three machines, then eventually at least eight, remotely from a command center and keep tabs on the array of sensors and cameras attached to the tractor.

Even as it is now, however, Ruiz sees advantages.

"The work the computer is doing is actually better than what my people can do," he said. "My people are fantastic. They're great, but they're people. Sometimes they may want to finish a field a little early, so they can get home or go a little faster on this pass so they can get to lunch. Even something as simple as making a turn, my guys might power through it, but the computer will slow down and do it perfect every time."

If all goes as Bear Flag hopes, autonomy as a service will only be an early chapter in the story. The goal is to eventually sell the kits to farmers, much the way autosteer GPS guidance systems are sold and installed today, though, "we still have a long way to go," Carmichael said.

In the meantime, there's plenty to learn by both the humans and the computers.

"We're seeing new edge cases constantly," Carmichael said. "That's one of the reasons we're doing this the way we are. It's worked so well. It's like a car. The more miles that car drives, the smarter it can get, and in the same fashion, the more acres we get under our platform, the smarter it gets."

For now, the company is working with crops like wheat, cotton, tomatoes, lettuce and other vegetables. It hopes to continue to expand on all of that, and into the Midwest soon.

"We're going to make sure when we get there, we do everything right," Carmichael said.

Other plans include adding spraying capabilities and a dive into the dirt work and land leveling.

Operators like Ruiz, one of Bear Flag's first customers, will be ready.

"I'm going to stay connected with Bear Flag, because this will really help us," he said. "If I can take a guy off the midnight shift and have him working on something else, that's great for us. I get better results and I get happier employees." 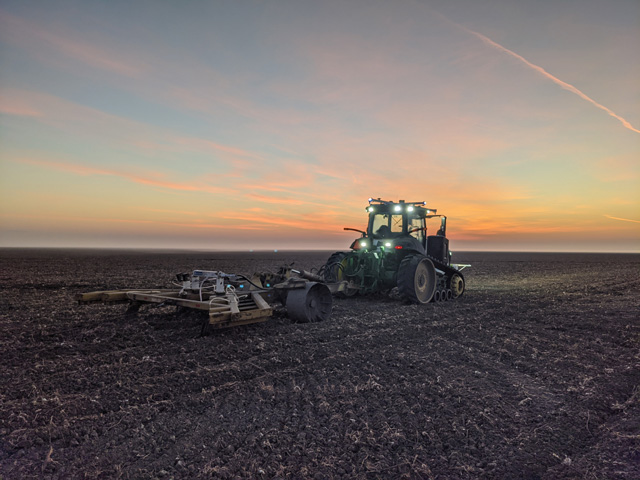