His start-up agricultural equipment business, Walkabout Mother Bins, is based on a piece of equipment common in his native Australia: enormous grain wagons meant to be parked at the end of the field. They're an on-site storage solution that he says can revolutionize harvest for North American farmers big and small.

But he worries. Did he lean too far into his Aussie roots in choosing the name "Walkabout?" His logo is a kangaroo silhouette filled in with an American flag. Too much?

It comes down to this, though: The giant bins are a common sight in the great open fields Down Under, where elevators can be distant and truck drivers hard to hire, but can they translate to North America, where some, but not all, challenges are similar?

"I was back home helping with harvest and I started to wonder why they didn't have mother bins in the United States," he said. "It would seem to fit. So the natural progression is let's build some and find out."

Walkabout bins are huge, stretching 58 feet end to end, 13 feet 9 inches wide and nearly 13 feet tall. They have seven axles. Current models can hold up to 4,000 bushels and unload that grain through a 22-inch auger at 900 bushels a minute.

They could grow even larger. There's a 6,000-bushel version in the works.

The idea is to help farmers caught between the dual issues of ever-increasing yields and ever-diminishing qualified labor. The bin is meant to be parked at the end of the field, then used as a holding tank available to take on grain when the trucks inevitably get backed up, the grain wagon is full, and the combine has to stop.

"Farmers here are facing the same challenges farmers in Australia faced 20 years ago," said Hedt, who started his company in South Dakota in 2015. "The cost of running trucks is getting very expensive. Finding seasonal labor is becoming increasingly hard. This bin allows you to harvest more efficiently, and with less equipment and fewer people."

Bins in Australia are still larger, up to 8,000 bushels, and that may be in the cards someday in the United States. Already, however, the company has reinvented the concept to a degree to adapt to the North American market. The largest engineering hurdle was the inclusion of rear-axle steering, allowing the bins to be transported much easier into and out of tight field entrances, a much more common issue in the United States than Australia.

That allows the bins to fit in anywhere a semi could, Hedt said.

The bins also have a remote-control on-off for the auger. The idea is a truck driver can return to the field, pull alongside the mother bin, hit "go" on the auger key fob and be off to the elevator again in minutes.

The bins can be towed empty and the PTO is operated by a 150-horsepower tractor.

"We joke that the only people who won't like the mother bin are the drivers who will miss their little 15-minute naps when they get back to the field," Hedt said with a laugh.

Walkabout has built and sold 19 bins so far, and Hedt is proud of, perhaps even a little surprised by, the diversity in those first clients. The buyers range from Alabama to Oregon, with plenty in the Midwest.

The company rolled 12 out of its Fargo factory this year and hopes to double that in 2021, selling them with a starting price of $150,000.

"In 10 years, this will be all over, like grain carts," he said. "It's the next natural progression in terms of farming capacity." 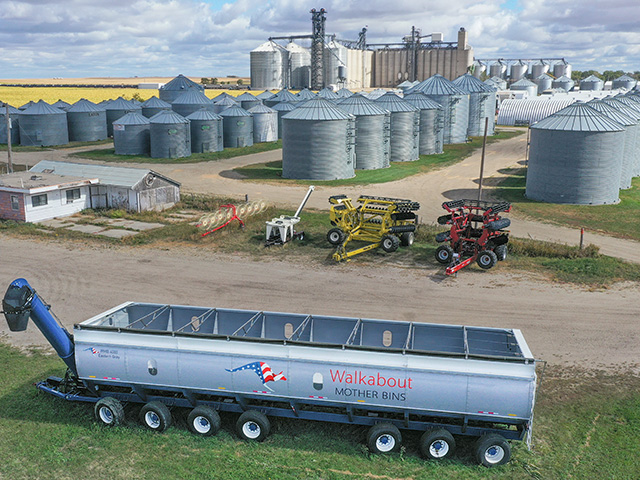