Mark Gaalswyk envisions a future in which groups of U.S. farmers or cooperatives could add value to their operations by producing fuels or additives using small, modular processing plants. These miniproduction plants could, literally, be located on the farm.

About the size of a semitrailer, Modular Energy Production System plants (MEPS) are factory-built units that could be quickly connected together on-site, explained Gaalswyk, who is the CEO and founder of Welcome, Minnesota-based Easy Energy Systems.

Easy Energy's MEPS could produce sugars or ethanol from corn, corn stalks or sorghum one year and a different type of product, such as waste sugar beets the next. In addition, the aforementioned processes that use enzyme-driven fermentation, Easy Energy is also working on another system with Iowa State University that uses heat to break down cellulosic material to produce various types of fuels.

"Think of this system as snapping different types of colored Lego pieces onto the basic module to make a different type of product," Gaalswyk said. "The new pieces represent different modules to produce different products from one basic system. We see ourselves having 1-, 2- or 5-million-gallon-per-year plants, and, perhaps, 80% of our business eventually could be overseas," he said.

"Our business plan is to work with a group of farmers or cooperatives," Gaalswyk explained, "where it would be economical to have minimal staff do the marketing at a central regional co-op for a number of local plants."

The idea is a technologically feasible one. Gaalswyk has submitted bids to process rice hulls in Vietnam and waste dates in Saudi Arabia, as well as various crops and crop waste in the U.S. Razor-thin margins in the ethanol business have so far proven to be barriers, at least for those feedstocks that have a cost.

The issue, Gaalswyk explained, is identifying and proving the economics of each type of feedstock at their Emmetsburg, Iowa, testing plant. "There are many free to negative cost 'niche waste' feedstocks we believe can be converted profitably into ethanol today with a MEPS," he said.

One farmer likely to work with Easy Energy on establishing the company's first commercial MEPS is optimistic on the technology.

"The idea is not dead," said Jess Daily, a Star City, Indiana, farmer who had originally planned to process grain sorghum this year with Easy Energy Systems. "But, we've all decided that work needs to continue to cultivate some higher value markets," he said. "The technology is doable but isn't economical yet."

Daily had been considering growing sorghum on some of his less-productive land and using the crop as feedstock for an Easy Energy MEPS plant that could produce ethanol or, perhaps, the additive n-butanol. He was -- and still is -- looking to work with other area farmers on this idea along with the company.

For now, though, they can't produce ethanol from corn or sorghum and compete with 100-million-gallon-per-year plants. And, n-butanol is such a specialized product, the marketing costs alone trying to break into that business are unnerving.

The economies of scale are daunting. "It is just much cheaper to build a 100-million-gallon ethanol plant than a 5-million-gallon plant on a per-gallon basis," said bioenergy consultant Scott Warfield, of Lee Enterprises Consulting Inc.

"Generally, a farmer is not an energy, ethanol or biogas expert ... and doesn't know how to produce these products," Warfield said. "A farmer then has to depend on others for expertise and services, and that added layers of cost to the farmer."

That's where Gaalswyk hopes to change the equation. He agreed building a small "stick-built plant on-site" would be too costly, but if such plants are built using their snap-together, factory-built, much-lower-cost modular units, they can involve less capital cost.

Gaalswyk's Easy Energy Systems has grown out of his original business, Easy Automation Inc., which sells systems and software for feed mills. He said the idea that smaller-sized fuel and additive plants can't make a go of it is similar to what they heard in regard to Easy Automation. That technology made smaller feed mills economically feasible.

"We found that by placing a much higher level of self-optimizing/data-gathering software on the smaller scale systems and then connecting these systems to distant experts who could remotely load precise models, a small plant can optimize production," Gaalswyk said.

"We're trying to do to the biofuels industry what we did to the feed mill industry by introducing a disruptive technology," he said. In addition to the Easy Energy headquarters in Welcome, there is an additional facility in Truman, Minnesota, and a full-scale 1-million-gallon-per-year MEPS demonstration plant in Emmetsburg, Iowa.

The demonstration plant in Emmetsburg can process various feedstocks into ethanol. The plant has also been modified to produce a different high grade of sugar, which can be much more profitable than fuel ethanol. Easy Energy plans to begin this year to sell the modules required to convert corn to these high-value sugars.

Easy Energy Systems has generally worked with fermentation technologies using enzymes to convert plant or other organic matter into usable fuels, solvents and additives. They are, however, also working with Iowa State University on its efforts to use another process, autothermal pyrolysis, to turn cellulosic materials like corn stover or woody biomass into component sugars and what are known as phenolic oils.

The sugars and phenolic oils produced can then be made into biofuels, an asphalt substitute or even an eco-friendly (ashless) coal substitute for power plants known as Lignocol.

"Lignin (from which phenolic oil is derived) is an amazing molecule and has the basis for tremendous kinds of chemistry, but we haven't completely figured how to best do it yet," said Robert Brown, director of Iowa State's Bioeconomy Institute and a professor in the college of engineering.

In this case, Easy Energy's efforts to commercialize turning cellulosic materials into usable products was a fit for the Bioeconomy Institute, Brown said. The company possessed the manufacturing capability to build and use the institute's patented technology on a commercial scale.

Easy Energy is designing the modules based on Iowa State's autothermal pyrolysis system. They are being built in Mankato, Minnesota, will be tested in Truman, Minnesota, then will eventually be installed at Stine Seeds at Adel, Iowa. Stine is a cooperating partner in the venture.

"There are a number of different avenues these technologies are taking," said Gaalswyk, "and they are moving quickly. The easiest avenue for us to test first was to see if our modules could produce corn ethanol, which they can. Now, the idea is to get all of our modules so they can convert low- to negative-cost waste products into higher value, more complicated end products that can yield increased profitability."

Indiana farmer Daily remains committed to considering this type of technology for the long run. "There has to be a better way than to always just compete on a commodity level," he said. 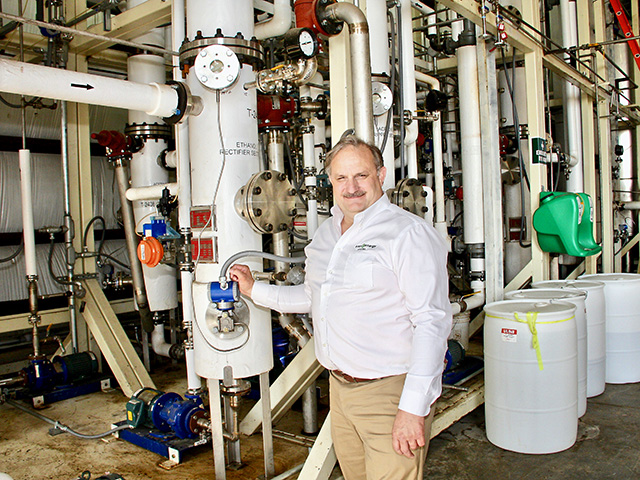