CHAMPAIGN, Ill. (DTN) -- Meet Esther. She can get up with the chickens, work from dawn until dusk and will never require an IRS Form 1099. What she might one day do is continuously scout your crops and collect important growing data that can be used to make agronomic decisions.

She's already doing that for scientists at the University of Illinois. The autonomous robot spent this summer trekking between towering rows of sorghum being grown as a feedstock for bioenergy and bioproducts.

Robotics is all about replacing humans in performing repetitive and dangerous tasks and they aren't completely foreign in agriculture. Robotic milkers are being successfully used in dairies. An unmanned aerial vehicle, or UAV, might be considered a type of robotic device, and this year we've seen the debut of autonomous tractors. Now small bots are making their way from science fiction to the field.

Esther is part of a program known as TERRA-MEPP (Mobile Energy-Crop Phenotyping Platform). Her sensors take images and collect microclimate data for each plant. Using these data, software constructs a 3D image to predict the yield of each plant from the ground up. Through genomic technologies, top-yielding plant traits (phenotype) are linked to their corresponding genes (genotype) to increase crop productivity.

Sierra Young is the University of Illinois graduate student working to build the physical robot. The name Esther, she said, was bestowed because it seemed to fit since the machine is doing tasks most humans (particularly grad students) would find herculean. Esther has given more than one unsuspecting person a start as she emerges from the field while doing her chores.

Joshua Peschel, a civil engineering professor and lead robotics researcher on the project, said Esther's design is based on search-and-rescue robots that survey collapsed buildings. "A robot gives us something we haven't been able to do in that we can now watch a crop continuously much like high-resolution television viewing," Peschel said.

By comparison, a high-flying drone takes a snapshot in time at the very top of the canopy. Esther gets a broader picture from below and traverses fields constantly in all weather conditions. The battery-operated rover is only 1 year old, and Peschel said the next steps are to work on making her decisions more human-like. For instance, she needs to be able to self-correct for simple situations such as getting hung up in lodged crops. The robot can also telescope to 16 feet, well above the canopy.

The developers of the Rowbot, a Minneapolis based firm, are also working to develop a small, self-driving machine. An advanced prototype, the idea behind this machine is that it might do in-season tasks that are difficult to achieve in a growing crop. It is being explored as a way to apply nitrogen fertilizer, inter-seed cover crops and collect informational data in corn.

The Rowbot carries a small payload and travels about 4 miles per hour. "I was actually surprised at how well the machine traversed a variety of conditions," Burnett said. Beck's trial plots don't have to turn rows and the machine has a tight turning radius. "Some damage to end rows would be of concern if this were to be put into use on a field scale," he noted.

Kent Cavender-Bares, one of the Rowbot developers, told DTN that the machine has been designed for tight turns so as to limit knocking down corn in the end rows. "Plus, we expect farmers will leave a narrow channel for our machines, making fields 'Rowbot ready,'" he said.

Burnett seeded a cover crop mix of ryegrass, radishes and turnips. He later flew the test plot with a drone and was able to detect visual differences in seed establishment.

"The Rowbot-seeded area of the plot looked much better than the aerial-seeded," he noted. "A certain amount of the seed gets hung up in the corn leaves in aerial application. That being said, the drilled application actually looked the best because we had excellent growing conditions and ideal rainfall for establishment. The better seed-to-soil contact and ideal growing conditions made up for the delayed seeding with excellent cover crop establishment."

Cavender-Bares said the Rowbot is still in its infancy. "We're an early-stage startup working to bring a new type of farm equipment to market," he said. "That's a slow process, and our pace is ultimately constrained by capital." Read his blog here: http://bit.ly/…

Peschel understands the economic realities. His project, which is funded through the Advanced Research Projects Agency-Energy (ARPA-E), is led by Illinois, but also partners with several other universities. Peschel said they are also actively engaged with commercial partners who see the future in this new technology.

Still, another consideration must be a machine that is simple to use and repair if it has hopes of making it to routine on-farm use. "The technology is important, but so is the user experience," Peschel added. "Making the unit compact, easy to move and affordable is critical."

While Esther is currently being developed to support plant breeding, Peschel does see a future for her in doing common tasks around the farm. "We already have robot vacuums that are very affordable that do a good job in the home," he said. "Think of similar jobs around the farm and you quickly get to scouting for pests, diseases and other problems."

Videos and information on the Rowbot can be accessed here: www.rowbot.com 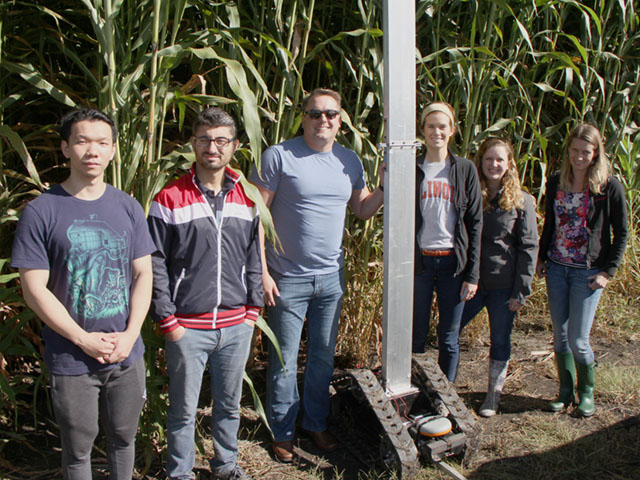