ROCKVILLE, Md. (DTN) -- It's not every day that the government comes a-callin', so when the Washington, D.C., phone number popped up on his cellphone on September 28, Illinois farmer Matt Foes couldn't resist answering.

He's glad he did -- the phone call was from the Department of Justice, and they wanted to know how John Deere's plans to purchase Monsanto's Precision Planting would affect Foes, who farms in Bureau County, Illinois.

The proposed acquisition has come under fire recently from the Department of Justice (DOJ), which filed a lawsuit in August to block it. The lawsuit argues that the purchase would allow Deere to hold a monopoly on high speed planting technology. John Deere's ExactEmerge technology accounts for 44% of this market, and Precision Planting's SpeedTube technology accounts for 42%, for a combined market share of 86%. See the DTN story on the details of the lawsuit here: http://bit.ly/….

In response, Deere has offered to license the SpeedTube technology to Ag Leader Technology, should the acquisition be allowed to go through. That in turn inspired another machinery company, Dawn Equipment, to accuse Precision Planting of infringement on Dawn patents involving the hydraulic down pressure control used in these high speed planting systems.

Things are getting complicated, to say the least.

For its part, the Department of Justice appears to be trying to fully grasp the tangible, on-farm effects the Deere-Precision Planter purchase could have on the nation's growers. Based on DTN interviews and Twitter conversations among farmers, the calls went out to select Midwestern growers starting the last week of September. The DOJ declined to comment for this article, but did not deny that they were the source of the phone calls.

"I don't know that he 100% understood the planter aspect of farming," Foes said of his DOJ interviewer. "But I was impressed with how genuinely interested in learning they were -- honestly it made me more confident in our government."

Precision Plantings' SpeedTube technology and John Deere's ExactEmerge technology are designed to move seed out of the planter and into the furrow faster, without losing accuracy. Both rely on a conveyor belt system rather than a gravity drop tube. The systems allow farmers to double their planting speeds, as high as 10 miles per hour. Originally, ExactEmerge was sold only as part of new John Deere planters. But after Precision Planting began selling SpeedTube in 2014 as a separate component that could be retrofitted onto existing planters, Deere began selling ExactEmerge as a retrofit option in 2015.

Foes said the caller questioned him on what high speed planting technology he owned, what options he would consider before purchasing SpeedTube, any other alternatives out there and how he would react to the price of SpeedTube going up 10%.

Foes said he laid out the many factors farmers consider in their planter equipment and how speed fits into the equation.

"We talked back and forth about the pros and cons of getting a larger planter versus making a smaller planter go faster," he said. "He asked a lot of good questions trying to understand what motivated me to make my 16-row planter go faster rather than buying a 24-row planter. He wanted to know how much of a price increase on all the [high speed planting] components I could take before deciding to go slow and use a bigger planter. It was a lot of very good questions."

The phone call lasted for 20 to 30 minutes, and Foes believed the DOJ caller walked away with a more nuanced understanding of planting technology and options.

"I think he thought that high speed was the only option out there for improving planting," he said. "SpeedTube is the part of a planter system that's being argued about, but there are so many more aspects of a planter that have to be considered beyond how fast you drive."

Down in St. Charles County, Missouri, Bill Houck also fielded a call from the DOJ on September 27. His interview was short and to the point.

"I was off in two minutes," he told DTN. In addition to farming, Houck runs an ag retail facility supplying farmers with wholesale chemical and fertilizer. And as a former dealer of Precision Planting equipment, he has a firm opinion on the Deere-Precision Planter deal.

"I told them I thought it was a great thing," he said. "They asked me how it would affect my business. I told them it would improve it to integrate the two companies as Deere was copying everything that Precision had anyway. They said thank you and [were] done."

Neither Foes nor Houck are sure how the DOJ got their cell phone numbers. Houck asked his caller, who told him he couldn't disclose that information. Foes speculated that the names of Precision Planter customers were made available to the agency in the course of the lawsuit.

Foes' DOJ caller told him he didn't have a set number of calls planned. "He said they were just getting started learning more about farmers' opinions rather than just what they were hearing from the industries involved," Foes recalled.

"It seemed like they genuinely wanted to learn and hadn't made up their mind yet," he said. 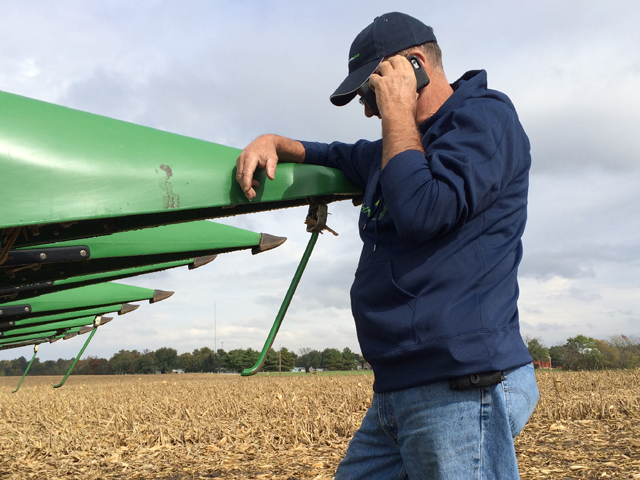