OMAHA (DTN) -- A western Kansas groundwater district is testing the theory that the Missouri River could be tapped to help deal with the declining Ogallala Aquifer by trucking 6,000 gallons of water roughly 400 miles to parched areas of Kansas and Colorado.

Mark Rude, district manager for Groundwater Management District 3 (GMD 3) in Garden City, Kansas, told DTN in an interview the project is a "proof-of-concept" idea to test the feasibility of larger water transfers from the Missouri River to western Kansas.

The Kansas water district is partnering with the Central Colorado Water Conservancy District and each district will use 3,000 gallons to help recharge a couple of small areas. The project would basically fill a typical 12-foot radius plastic storage tank.

Rude said GMD 3 had started a few years ago with a truckload of water from the Missouri River to release it into the dry riverbed of the Arkansas River. It took just a few minutes for that water to soak into the riverbed. The goal, however, was to understand the various agencies involved in getting a permit. That's essentially the same scenario here.

"We've looked at all kinds of ideas and continue to do that, but this was just a very simple partnering concept," Rude said. "A proof-of-concept project is merely trying to take something academic and make some aspect of it a reality, and in the process, demonstrate or learn some things, and maybe develop some partnerships. That's simply what we're trying to achieve."

Still, Rude said the project required getting boxes checked regarding endangered species as well as another permit to ensure it would not lead to nuisance species. There also needed to be approval from the Kansas Department of Health and Environment on the water quality for releasing the river water into an area that absorbs into the Ogallala Aquifer. Another permit was required by the Department of Agriculture for the water appropriation itself.

"Of course, moving a truckload of water by itself is not a practical idea at all," Rude said. "But going through that process is very, very cost-effective if your purpose is to learn, to discover things like what might be the impediments in Kansas policy or staff to things like major water transfers."

The project falls in line with the goals of the Kansas Aqueduct Coalition, a group that has a website link on GMD 3's website. The coalition's logo shows a branch or aqueduct coming off the Missouri River providing water to multiple areas of Kansas in the process. That group's mission is for Kansas to "secure and develop unused and undervalued waters of the state for the benefit of the present and future people of Kansas." Rude said some of his current board members and area farmers are also part of the aqueduct coalition.

GMD 3 also includes reports on its website on the feasibility of water transfer from the Missouri River that goes back to the early 1980s. "As you can imagine, if you're a groundwater management district and a major water groundwater use area with a significant part of the economy dependent on water supply then all of the elements of groundwater management come into play, whether it's conserve and extend what you have or other projects to import, replace or augment supplies," Rude said. "So, it's actually been in versions of our official management program documents since probably the 1970s."

Rude noted right now there is a significant pot of infrastructure funding passed by Congress last year to address drought and water resiliency, primarily in western states. To make an aqueduct feasible, however, would not only take action from the Kansas Legislature but also likely would require congressional action.

Shannon Kenyon, who manages Groundwater Management District 4 (GMD 4) in northwest Kansas, told DTN in an interview that looking at drawing water out of the Missouri River should likely be an option of last resort.

"I'm not saying it's not valuable, but I'm saying that there are a lot of other things that can be tried first," Kenyon said. "If you look at the Mississippi River right now and even the Missouri River for that fact, we have a nasty drought that is hitting the entire western United States and at times when you need water you aren't going to be able to get it from those sources."

Kenyon also pointed to the legal complexity of water rights, compacts and litigation that would likely be generated from a long-term project to transfer water from the Missouri River to western Kansas or Colorado.

GMD 4 was among the first water districts in the state to implement Local Enhanced Management Areas, or LEMAs. Under LEMAs, irrigators are placed under five-year agreements in which they agree to reduced water use, but they can also bank water if they use less than the LEMA allows.

GMD 4 and Groundwater Management District 1 both have multiple LEMAs in place that mandate irrigation reductions. GMD 3 so far has not implemented any LEMAs.

"So, we've proven up here anyway with LEMAs and reduced pumping that we can not only reduce the declines in the aquifer but stabilize them, which we have done the Sheridan 6 (the first LEMA) area," Kenyon said. "But it's also proven economically more profitable in the area as well. So, I think it's more effective to be able to first exhaust all of our resources locally and implement some conservation practices before we go with expensive adventures of trying to talk everybody into letting us move water across the state."

In terms of looking at conservation measures, Rude said he wants to see if members of the Kansas congressional delegation and other lawmakers would consider adjusting the Tax Code for qualified conservation easements. Rude would like to see language added to that section of the Tax Code for "conservation of groundwater." Such a provision would give landowners a financial incentive to idle their irrigation and look at dryland options for their farm ground.

For now, GMD 3 has a permit to haul 6,000 gallons sometime before the end of 2022. Rude said talks about lining up a driver and truck would likely wait until sometime after harvest ends.

"How Low Can It Go? Mississippi River at Memphis Breaks Another Record," https://www.dtnpf.com/… 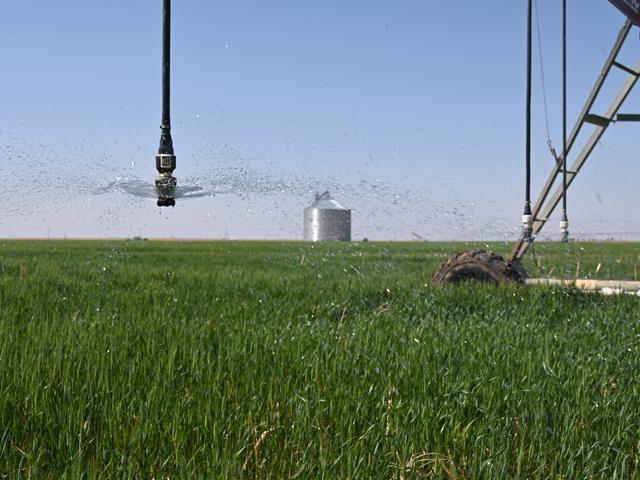