Tips to get the most out of every nitrogen dollar include applying only what's necessary and protecting what is applied.

Emerson Nafziger, a University of Illinois crop production professor emeritus with an emphasis in nitrogen research, said it's common for farmers with a top priority of maximizing yields to apply more nitrogen (N) than corn needs, especially when the nutrient is cheap. It's done as a hedge against N loss.

Nafziger believes it's time for the "just apply plenty of N" mindset to change.

Fertilizer prices are at all-time highs. Nitrogen (N) -- anhydrous ammonia, urea and UAN28 and UAN32 -- has doubled to tripled in price in the past year, and supply questions exist. Read the latest DTN fertilizer price story at www.dtnpf.com/agriculture/web/ag/crops/article/2022/02/08/five-eight-fertilizer-prices-drop-10.

"People got used to the idea that you put on as much nitrogen as you think the crop could possibly need, and that's the yield-goal based system," Nafziger recently told farmers and chemical suppliers at the Illinois Fertilizer and Chemical Association Winter Conference in Peoria, Illinois. "The yield-goal thinking isn't working. ... We can't afford that."

Dan Quinn, a Purdue University Extension corn agronomist, said economics is a vital component in any N program. Corn-yield response to N rates is not linear. There's a point when the amount of N applied no longer pays for itself in bushels produced, he added.

How and when N is applied, which may have environmental consequences, should also be considered when developing nutrient programs, Quinn said as a guest speaker during a recent Pioneer Forward-Thinking Farming webinar about managing for improved nitrogen utilization in corn.

"No. 1, fertilize for high economic net return, not max yield," Quinn suggested. "The second thing is be as efficient as possible with nitrogen fertilizer applications. Try to do everything you can to minimize the risk of losing the nitrogen once applied. How can we get the most bang for our buck from nitrogen fertilizer?"

Here are four tips to do just that.

The Maximum Return to Nitrogen calculator, developed in the mid-2000s by university researchers and nutrient specialists in seven Midwest states, is one tool farmers can use to determine optimum N rates for corn.

Corn growers in Minnesota, Wisconsin, Illinois, Indiana, Iowa, Michigan and Ohio can input data such as the state they farm in, what crop the corn is following, corn price and N form and price to find the optimum N application rate and range. Find the MRTN at http://cnrc.agron.iastate.edu/….

Quinn said predicting the optimum N rate is difficult and it changes year after year due to weather, prices and other factors. However, the MRTN contains decades of data from thousands of N research trials from each state, which are continually updated, to provide farmers the best opportunity to apply the optimum, economic N rate.

"I think (nitrogen rate calculators) are really important tools folks can use, especially this year with the way (corn and nitrogen) prices are," Quinn said.

A 2021 University of Illinois replicated N rate trial in corn following soybeans showed the value of using the economic N rate and not going for maximum yield, which the MRTN provides, according to Nafziger.

"If the goal is to have maximum yield, not maximum profit, this (economic optimum N rate) approach doesn't work. It's designed to maximize income," Nafziger said.

To improve N-use efficiency, apply N when corn needs it the most or as close to that time as possible, Quinn said. University of Illinois research indicates corn needs about 25 to 30 pounds of N per acre from the VE to V6 growth stages and the rest of its needs during the rapid uptake phase and grain fill period between V7 to R6.

Quinn recommended farmers avoid fall N applications if possible. The longer nitrogen is in the soil, it's more prone to leaching. That can be detrimental to yields and the environment.

If fall N is applied, namely anhydrous ammonia, Quinn urged farmers to include a nitrification inhibitor. He and Nafziger noted that fall N applications occur and will likely continue for many reasons. Nafziger and Quinn said more anhydrous ammonia was applied last fall than in previous years due to escalating N prices and concerns about N availability this spring. "I know farmers who paid $730 per ton for anhydrous (less than half of the current price). I hope a lot of people were able to do that," Nafziger said.

Split-applying N at planting and in-season is more efficient than pre-plant applications, according to replicated research trials Quinn conducted while at the University of Kentucky. Studies were done at three locations from 2018 to 2020. UAN32 was the only N source.

On average, it took about 215 pounds of pre-plant N per acre -- 185 pounds surfaced applied a day before planting and 30 pounds at planting -- to hit a maximum yield of 210 bpa for corn following soybeans without a cover crop. With split-applied, on average, 187 pounds of N -- 30 pounds at planting and the rest sidedressed at the V6 growth stage -- was needed to yield 217 bpa.

"What stands out is the difference between pre-plant and split-applied nitrogen and how much nitrogen is needed and what the yield is at different rates," Quinn said. "Split-applied is a more efficient way to apply nitrogen; we had less nitrogen loss in that system."

Nitrification and urease inhibitors minimize volatilization of N and increase the chance of utilization by corn.

If anhydrous ammonia is applied in the early fall when soil temperatures are 50 degrees Fahrenheit and trending down, Quinn urged farmers to include a nitrification inhibitor, which slows transformation of ammonium into nitrate to reduce denitrification and leaching.

For surface-applied urea and UAN, a urease inhibitor is recommended to reduce N loss, Quinn said. A urease inhibitor can prevent volatilization for about seven to 14 days after application, whether in the spring or fall.

If urea and UAN is incorporated into the soil, Quinn said a urease inhibitor typically isn't needed.

"It's really trying to do everything we can to minimize or spread the risk out of losing nitrogen fertilizer once applied," Quinn said. "Loss of nitrogen is lost money and lost yield."

Jeff DeBruin, a Corteva Agriscience research scientist, studies, among other things, if certain corn hybrids use N more efficiently than others without sacrificing yield, which could be part of future breeding programs. If hybrids required less N to perform well, that could reduce N usage, save farmers money and help the environment if there's less N to be potentially lost.

During the Pioneer webinar on managing for improved nitrogen utilization in corn, DeBruin said some hybrids use N more efficiently than others in certain years and at different research locations, but the data isn't consistent enough make any claims.

Instead of trying to match a specific hybrid to a nitrogen program, DeBruin said farmers are better off split-applying nitrogen at the time when the crop needs it the most and protecting it from loss by using N stabilizers when needed.

"Go for top-yielding hybrids and manage your nitrogen relative to the environment," he concluded.

Want to keep up on the latest retail fertilizer prices and trends? For all 1,700 fertilizer bids that DTN compiles each week, sign up for a free trial (https://www.dtn.com/…) of a MyDTN subscription. 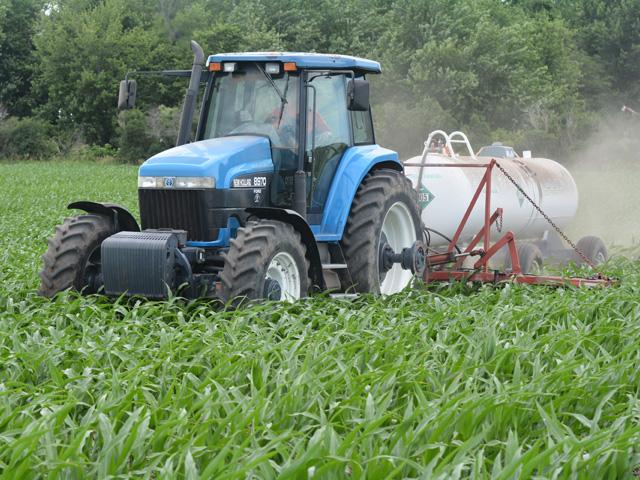