CHARLES CITY, Va. (DTN) -- People ask this Charles City, Virginia, farmer the question the way they'd ask someone else how their day was going, a default icebreaker.

"Everyone comes up and asks, 'You gonna break the record?'" said David Hula, the reigning king of corn.

He's a mix of meticulous and curious as a farmer, attuned to every detail and willing to try nearly anything not just once but twice.

"If it makes good walking sense, I'll try it again," he said. "There might be a reason it didn't work, something we did."

That's what Hula's always examining: "Something we did."

He raised 616.195-bushel-per-acre corn in the 2019 National Corn Growers Association National Corn Yield Contest, a record-breaking, bin-busting, earth-shattering, bar-raising mark. And, as he steered his John Deere S770 through a field of dryland corn not far from his southeastern Virginia headquarters in early September, he was still trying to figure out exactly what went so right with that crop.

It's not enough just to post the result or even to show his work -- all he did to solve the problem. He wants to know what was worth his time and what wasn't.

"Duplicate what you did, and then you'll become a student of your crop," Hula said, reciting oft-given advice.

"Are you gonna break the record?" he asked.

He considered the questions, the attention, the pressure, and he broke into a hearty laugh, bending over the steering wheel in the cab.

"Do you know how hard that is?" Hula then asked, exasperated.

But he's trying. He wants to be a better farmer every year; he thinks everyone should. Sitting still is the only way to lose.

"Oh yeah, it's easy," Hula said with a sarcastic twinge. "The good Lord has to bless us with good weather, and we have to do a lot of things right."

The land Hula farms is part of his story, perhaps some of the most interesting farm ground in the country, even if it produced 150 bushels of corn instead of 616 bushels.

His Renwood Farms operation is located 10 miles upriver from the Jamestown Settlement, the first permanent English settlement in North America. Today, Hula grows corn and soybeans on a field, one of the first the settlers would have planted, right across the river from the island of the original settlement. The same soil has seen 400 years of agriculture.

One farm, Curles Neck, the site of some of his best yields, has so much history it has a dedicated Wikipedia page. But you won't find Hula's historic accomplishments there.

Other farms were crossed by so many Revolutionary and Civil War armies, relic hunters used to regularly seek permission to hunt. At times, he would allow it, at least until he grew tired of those who wouldn't ask or even bother to fill in the holes they dug.

So, Hula added a bucket of old nuts and bolts to a pile of lime and spread it across a field, stunting current hunters and, surely, confounding future ones. (The secret to 616-bushel corn: good emergence, perfect weather, adequate nitrogen and 1 pound per acre of 5/8-inch nuts?)

The land's history piques his interest, but just that. The first and overriding factor, no matter who once farmed or fought there, is how it farms today.

"It's been farmed since 1609, the oldest continuous farm ground in the United States," Hula said. "It was the second place we harvested 300-bushel dryland corn. Everyone says we're not good stewards, yet the land is doing better than it ever has done. It's a testimonial to the success we as growers can have."

As for the history? He'll eagerly listen to anything anyone has to tell him about what happened there, but that's it.

"I'd rather read about how to grow better corn," Hula said.

That year, the 616-bushel year, started out nearly perfectly.

There may be nothing more key in Hula's view than consistency through a crop. He aims not for fewer gargantuan ears packed with kernels but for thicker stands of consistent ears, even if they trend more "medium" than "extra-large."

That starts with emergence.

Another boost in 2019 came from second ears, about 50% of which pollinated and produced up to 500 kernels.

"That's when we knew we had something really good," Hula said.

The plots that break records don't represent all his fields, they're carefully selected and monitored. They've always proven profitable -- the 616-bushel plot cost $1,700 an acre, profitable at anything better than $2.75 corn. But they do demand extra attention.

What's learned there, though, is spread across Hula's other fields.

He wants to see success with a major new strategy or idea three years before implementing it across his crops. There are always new hybrids to try and ideas on micronutrients and fungicides. Hula implemented a big change about five years ago when he began strip-tilling some ground.

And he'll talk about it as much as he can.

"I'm an open book. Someone asks me what we do, I'll tell them. But they need to ask the right questions," Hula said. "I want to help each grower understand what their limiting factors are and try to get them to work through that."

As for the question he's most likely to be asked? He tries to answer truthfully.

"We have stuff that will do good, but I don't envision it being that good," he said.

For him, it's not about a contest, and it's only vaguely about a number. It's about topping himself and taking another step toward mastering every seed and every acre.

"I'm not competitive to beat other people, but just to do better," Hula said. "We don't have one magical piece of dirt. We've duplicated our success on many tracts of ground, irrigated on five different pivots in two different counties. We have a system that has been duplicable and, to me, that's probably the most gratifying thing we've done." 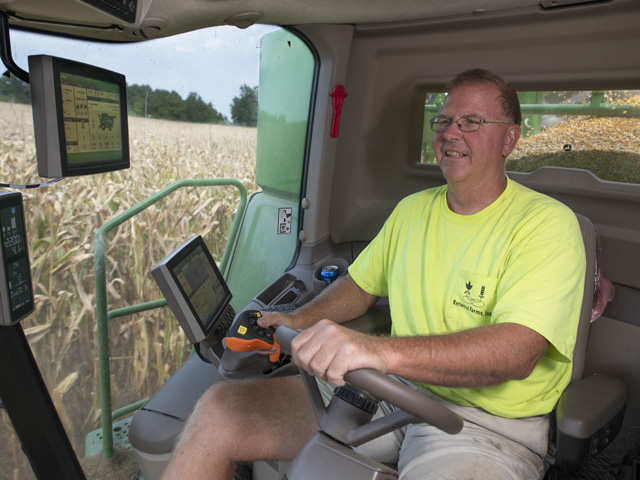