ROCKVILLE, Md. (DTN) -- Weather extremes are a major threat to U.S. row crops, as 2019 demonstrated vividly. But some insects and diseases actually thrive in the chaos of flooding, drought, hail and heavy rainfalls, and they are poised to prosper in the years ahead.

Mueller hosted a webinar for the North Central Climate Collaborative (NC3) this week, where he highlighted how climate change -- and the extreme weather it brings with it -- may affect field crop pests.

Other winners? Heat-loving insects, like thrips, and the diseases they vector, are on the rise, Mueller noted. Traditionally "Southern" diseases like Southern corn rust and frogeye leaf spot, are also becoming yield-challenging staples in the Midwest in recent years. And diseases with origins in equatorial regions and the Southern Hemisphere, like tar spot and bacterial leaf streak in corn, are suddenly surfacing in the middle of North America.

The development and life cycles of diseases and insects are notoriously complex, and many factors influence their rise and fall in agriculture, from economic pressures to evolving pest management and farming practices, Mueller stressed in his presentation. But for many of these pests, the weather changes associated with climate changes can be linked to their ascent as major agricultural pests, he said.

So let's take a look at some of these climate change opportunists.

Sudden death syndrome is well known for the abrupt and highly visible interveinal yellowing and necrosis that occurs during the reproductive stages of a soybean field, usually in late July or early August. Entire patches within a field can turn brown and die, causing substantial yield loss.

Long before these symptoms surface, the disease is already present, Mueller noted. The fungus, Fusarium virguliforme, thrives in cool, wet soils and infects plants' roots during the seedling stage of development. When rainfall events occur later in the season during early to mid-reproductive stages, a toxin caused by the disease is flushed up into the plant, causing the dramatic symptoms and yield loss.

Physoderma brown spot in corn, caused by a fungus called Physoderma maydis, is also thriving in recent years, Mueller added. The disease's swimming spores infect when heavy rainfall and flooding causes standing water in the whorl of a corn plant -- a common phenomenon in the spring and summer of 2019. The fungus causes lesions to form on the leaves and stalks and can lead to a stalk rot later in the season, as well. "This is one where we've really seen an uptick in the last five years or so, and this is one that is directly related to having heavy rainfalls very early in the season," Mueller said.

On the other end is charcoal rot, a disease that thrives during hot, dry seasons. Tiny structures called microsclerotia grow inside the soybean's taproot and stems, clogging the plant's ability to move nutrients and water, and causing them to turn yellow and brown and wilt. Plant pathologists expect charcoal rot to become more prominent as extreme weather events like dry growing seasons become more common, Mueller said.

"Extreme examples -- one too much water, one too little water -- and there are diseases ready for either condition," he said.

THE INSECT OF THE HOUR: THRIPS

Thrips love heat. These plant-sucking pests prefer to reproduce when temperatures rise into the 80s Fahrenheit, and they do best in dry conditions. During the drought of 2012, their populations swelled across the Midwest as they assaulted already stressed crops with their feeding, Mueller recalled.

But thrips do more than bleed precious moisture from plants; they also vector viruses such as soybean vein necrosis virus, tobacco ringspot virus and tobacco streak virus. Between 2013 and 2017, plant pathologists have seen outbreaks of these viral diseases -- a good indicator that thrips are doing very well, Mueller noted.

In contrast, viral diseases vectored by another common pest, the soybean aphid, such as the soybean mosaic virus, have been on the decline. One factor seems to be that soybean aphids do not do well in hot, dry conditions -- their reproductive abilities slow dramatically as temperatures push into the upper 80s, and they die within days when temperatures surpass 95 degrees, Mueller said.

Southern corn rust has been defying its name in recent years, sneaking into the Midwest as early as July, in time to infect cornfields and threaten yield loss. (See some DTN stories here: https://www.dtnpf.com/… and here: https://www.dtnpf.com/…). This year was no exception, as the disease arrived in Midwest states like Iowa and Nebraska in time to cause yield loss in 2019, Mueller said.

The disease usually gets its start each year in Mexico and the Caribbean, but the disease may be overwintering farther north in recent years. Plant pathologists have responded by creating a tracking tool to help growers stay aware of the fast-moving disease during the growing season: https://corn.ipmpipe.org/….

Likewise, frogeye leaf spot, long the bane of Southern soybean growers, is becoming a regular Midwest invader, Mueller said. The Crop Protection Network, a research collaboration by U.S. and Canadian university crop scientists, has developed a disease loss calculator for corn and soybeans. It shows that, on average, farmers lost around 460,000 bushels per year to frogeye leaf spot in the Midwestern states between 1996 and 2000 -- a 4-cents-per-acre economic impact. In contrast, from 2013 to 2017, Midwestern growers lost 7.6 million bushels -- or $1.15 per acre -- to the disease. See that calculator here: https://loss.cropprotectionnetwork.org/….

"So you can see a very dramatic increase in frogeye leaf spot in these Midwestern states over the last five years," Mueller said.

You have to look even farther south to find the origins of two new invaders -- tar spot of corn and bacterial leaf streak of corn.

Tar spot of corn was first discovered in the U.S. in 2015 in Illinois and Indiana and has since been documented in eight states, where it can cause serious yield losses in susceptible varieties. The disease's arrival in the U.S. remains a mystery, as it was previously only found in Mexico, Central America, South America and the Caribbean. See its spread in the U.S. this year here: https://corn.ipmpipe.org/….

Likewise, bacterial leaf streak of corn surfaced in Nebraska in 2013 and has since been found in nine other states. The bacteria that causes the disease, Xanthomonas vasicola, was previously most common in the Southern Hemisphere, in places like the Caribbean, Central America, Africa and Australia. (See more from the University of Florida: https://edis.ifas.ufl.edu/…).

How are these distant southern invaders getting here? Scientists are still hunting for answers to this question, but one prominent theory is that they may be moving north on the increasingly severe tropical storms that form near the equator in the Atlantic Ocean and besiege North America each year, Mueller noted.

"There is a lot of aerobiology that needs to be sorted out," he said. "But we are certainly continuing to see new or invasive disease and insects." 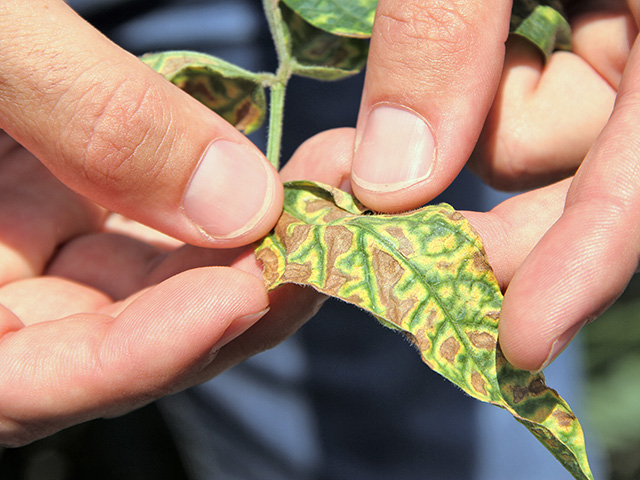