ROCKVILLE, Md. (DTN) -- Farmers have a range of choices when it comes to herbicide-tolerant soybean technology in 2020 -- up to seven different traits.

When selecting seed, remember that disease, insect tolerance and other genetic characteristics should still top your soybean shopping list. But with the growth in herbicide-resistant weeds, weed control is a crucial part of soybean profitability, and herbicide-tolerant traits can be an important tool.

Moreover, the growing web of different herbicide-tolerant crops planted across the country has made it more important than ever to know what is in the variety you are growing -- and what's in your neighbor's. So here is the latest information on the status and availability of each different trait option, organized by herbicide-tolerant genetic platform:

The original glyphosate-tolerant Roundup Ready trait have been off patent since 2015. Although Monsanto, now owned by Bayer, phased the trait out of its seed stock years ago, the trait is still available from university breeding programs and some smaller, localized seed suppliers. Because the trait is off patent, growers who use RR1 soybeans can save them for seed. Growers interested in finding varieties with the RR1 trait should check with their local universities and state seed associations for information on availability.

After phasing out RR1, Monsanto focused on its glyphosate-tolerant Roundup Ready 2 platform. The trait remains a standalone option for growers in 2020, and will likely continue to be available for a few more years, either from Bayer seed brands and other seed companies that license the trait, albeit in smaller and smaller numbers, said Bayer Soybean Portfolio Lead Ryan Rubischko.

Glyphosate and dicamba-tolerant RR2 Xtend soybeans accounted for 60% of the soybeans planted in the U.S. last year, roughly 54 million acres. It's too early to say if that number will rise in 2020 or -- as it is now facing increased competition in the marketplace -- stay the same or even decrease, Rubischko noted.

The trait is available in maturity groups ranging from Group 00 through Group 7 from Bayer seed brands and more than 100 licensees, he noted.

Growers who use RR2 Xtend varieties in 2020 should be aware that the corresponding herbicides, XtendiMax, Engenia and FeXapan, face an increasingly complicated number of use restrictions.

In 2018, EPA released a new set of restricted use pesticide (RUP) labels for these herbicides with restrictions on when and how growers can use them. Another herbicide, Tavium, was registered in 2019 for use in the Xtend system, with a similar set of restrictions.

However, after the third consecutive year of off-target dicamba injury reports -- including record levels in Illinois and Indiana -- some states are taking measures to further restrict dicamba use in 2020. Most recently, Illinois has announced a 24(c) label with a June 20 cutoff date and an 85 degree cutoff for dicamba next year. (See more here: https://www.dtnpf.com/…)

Bayer's next generation of soybean herbicide-tolerant trait technology is XtendFlex. These soybeans can tolerate over-the-top use of glyphosate, dicamba and glufosinate. The technology was used under stewardship in 2019 in Bayer's Ground Breakers program, but the company hopes it will be fully commercialized in 2020. The only remaining obstacle to full commercialization is EU import approval of the trait, Rubischko noted.

"We're hoping for a late spring of 2020 approval of XtendFlex with the EU," he said. "Given that anticipated timeframe, we could see an introductory launch of XtendFlex for the 2020 season."

The company has XtendFlex soybeans available in a broad range of maturity groups for 2020, but the timing of that EU approval will determine what volumes are available in what regions, added Hays. Given that these soybeans contain the Roundup Ready, Xtend and Liberty Link traits, growers should have a range of herbicide options to use over the top of them legally in 2020, he added.

Ultimately, the XtendFlex trait is expected to inherit RR2 Xtend's "throne" as the basis for Bayer's soybean breeding portfolio in the coming decade. "We've shifted breeding efforts from RR2 to the Xtend platform and we'll start to shift that to XtendFlex in the future," Hays said.

The glufosinate-tolerant trait LibertyLink remains a standalone option for growers in 2020, said Marc Hoobler, soybean agronomy lead for BASF, which now owns the trait after Bayer divested it in 2018.

"There is a transition underway to the enhanced LibertyLink platform, which is LL GT27, so we do expect those LibertyLink acres to decrease in 2020, but there certainly still will be varieties available for sale with the standard LibertyLink trait in both the Credenz brands and other licensees' brands," Hoobler said.

The LibertyLink trait remains available in maturity groups ranging from zero to mid-Group 7, he added.

The LL GT27 trait was co-developed by Bayer and MS Technologies and is now part of BASF's portfolio. It provides tolerance to glufosinate, glyphosate and a new HPPD/Group 27 herbicide called Alite 27 that isn't yet registered for use by the EPA.

Some seed companies are offering GT27 (the glyphosate- and the HPPD-tolerant trait) as standalone varieties, but BASF is focusing on the combined LL GT27 moving forward, Hoobler said. Between LibertyLink and LL GT27, BASF expects the LibertyLink platform to exceed 20% market share in 2020, Hoobler said.

The LL GT27 trait is only offered in maturity groups ranging from Group 0 to mid-Group 4, and that is unlikely to change, he added. "The target geography is largely the Midwest," he said. "Late Group 4 is probably the latest maturity we would ever have."

The company is hoping Alite 27 will be registered in the fourth quarter of 2019 as a pre-emergence herbicide for use with LL GT27 varieties in 2020. "Initially, it will only be registered in select counties and states, but in the first year, we believe we can enable use on 10 million to 12 million acres," Hoobler said. "Then, later on, we will add additional states and counties as we complete data requirements for the federal label."

The LL GT27 soybeans do not contain the Roundup Ready gene, but rather a different glyphosate-tolerant trait. That means some glyphosate products that use Roundup Ready-specific language on their labels are not technically legal for us on GT27 varieties, an issue EPA is working to resolve for the 2020 season, BASF said. "The EPA is aware of the confusion in the marketplace and is willing to speak individually with any state that is still concerned about which products can be used over GT27," BASF said to DTN in an emailed statement.

Enlist E3 soybeans, co-developed by MS Technologies and the former Dow AgroSciences and now part of Corteva Agriscience's portfolio, are tolerant to glyphosate, 2,4-D and glufosinate. Last year, Corteva received final import approvals in the spring and were able to release a limited commercial launch of the soybean trait. "We were able to get that technology out on several million acres this past spring," said Mike Dillon, global soybean portfolio lead for Corteva.

This year, the company is expecting to reach at least 10% of U.S. soybean acreage, roughly 9 million acres, with Enlist E3 soybeans, Dillon said. "We have well over 100 licensees for 2019 and 2020, and since we launched the technology, we have had a 15% increase in the number of seed companies that have chosen to obtain a trait license," he said.

At the moment, Enlist E3 soybeans are available in maturity groups ranging from Group 00 to Group 4, Dillon added. "We are working toward more maturity groups and anticipate those products coming very soon," he said. "But the bulk of our varieties right now are most adapted to the central U.S."

Since, like GT27, Enlist E3 soybeans contain a non-Roundup Ready glyphosate-tolerant trait, some glyphosate products are not technically labeled for use on them. Corteva has two herbicide products registered for use on Enlist soybeans: Enlist One (2,4-D choline) and Enlist Duo (a glyphosate and 2,4-D choline pre-mix).

"Additionally, Durango DMA glyphosate herbicide and other products from our distribution partners that are inclusively labeled for use on crops that are 'glyphosate tolerant' or 'containing a glyphosate-tolerance gene' may be applied to Enlist E3 soybeans," the company said in an emailed statement to DTN.

STS-tolerant soybeans remain an option for growers in 2020 under two different platforms. The first are STS-tolerant soybeans that contain a single gene, Als1, which confers tolerance to sulfonylurea herbicides (in the ALS-inhibitor class of herbicides). First deployed in the mid-1990s, this STS-tolerant trait is now off patent and therefore available from a range of seed companies, Dillon noted.

Both STS-tolerant options are native (non-GM) traits that allow soybeans to tolerate the application of certain ALS herbicides, which makes them a good fit for soybeans double-cropped after wheat or grown around rice fields, two crops where this type of herbicide use is common, said Dillon.

"There is localized availability of STS-tolerant soybean varieties in certain geographies with these cropping rotations," he noted. "It's not widely deployed across the corn and soybean belts, but there is a good selection of products from multiple companies out there." 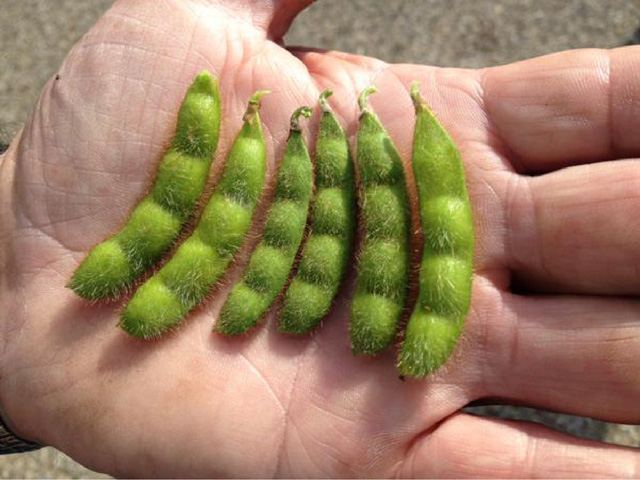