Pat Sanstrom started scouting corn early this season. Like many farmers, he was forced to plant some fields into wetter-than-ideal conditions and later than preferred.

"The best way to know what's coming next is to dig in and try to identify anything else that could further compromise stands," said the Newman, Illinois, farmer.

Yield comes first when Sanstrom selects corn hybrids, but standability is a close runner-up on his list of desired attributes. "It doesn't do much good to grow a crop if it goes down, or we can't get it all picked up," he said.

Sanstrom heads to the field several times a year with a spade in hand. He digs up corn early to check for possible compaction issues, particularly in no-till fields where he probes for density layers. Later in the season, he searches for insect pressure and evidence of disease.

Sizing up corn stands ahead of harvest is prudent in a season filled with adversity, but agronomists such as Kevin Nelson encourage farmers to take a stand on stands every year. "Every field has its own story, but concentrating on a few basic practices lays the foundation for good standability and reduced lodging," said Nelson, an independent agronomist with Prairie Agronomics, in Ottawa, Illinois.

This is the third of five stories in DTN/Progressive Farmer's Stand Strong series. Optimizing yields on every acre requires getting corn off to a fast start and establishing a sturdy stand. Stories in this series will offer tips to strengthen standability.

Most seed companies have some ratings systems that are compiled on various soils, population levels and other factors that influence plant standability. "Appropriately placing hybrids in situations that are conducive to each specific hybrid is a crucial step toward good standability," Nelson said.

Maintaining soil fertility levels in optimum ranges helps plants grow as robustly as possible, aiding in growing strong stalks and roots. University of Illinois plant pathologist Nathan Kleczewski suggested choosing hybrids with good stay-green characteristics. "Those might not necessarily be associated with disease resistance, but they tend to have physical properties that allow them to stand better," he said.

Fungicides aren't a cure-all, but they help protect leaf tissue from foliar fungal diseases. Kleczewski said stalk rots and lodging issues start when foliar diseases come in and strip the plant of the ability to fill grain after tassel.

"When the plant switches from the vegetative to reproductive state, it makes a decision not to dedicate carbohydrates to the foliage because it is time to reproduce," he explained. "If the plant's carbon budget is limited, and the foliar area intercepting light is reduced substantially, the plant will start pulling starch and sugars from the roots.

"This reduces the amount of nutrients available to support those tissues and allows secondary pathogens to start degrading tissues," Kleczewski said. "It's like when you build a road, but you don't put the money in to repave it -- the road is still there, it's just not functioning optimally."

An Iowa study confirms an application of fungicide at flowering time improves standability, but has no effect on yield and increases grain moisture at harvest. The research was done in years with limited stress from water and disease, she noted.

"So, it is possible that with poor root systems, corn rolling and other issues, we wouldn't see that improved standability," Robertson added.

"We've all been taught that it is fine to sacrifice some timeliness to wait for good planting conditions," Sanstrom said. "This year, the window for good [planting] conditions never came, or it was too narrow. Next year, the temptation is going to be to roll early and fast."

Sidewall compaction tends to happen when the soil on top often seems near perfect, but the soil below the surface is too wet. Planter double-disk openers can smear the side of the seed trench and pressure-pack the soil too tightly.

The compacted sidewalls act as barriers that keep the corn roots from expanding to their full potential. Instead, roots get trapped in the planting trench, grow straight down and don't spread between rows. They often take a horizontal turn until they can clear the compacted zone.

Symptoms sometimes don't show up until midseason or when conditions turn dry. "Unfortunately, wind tells us roots haven't been able to get the water and nutrients needed to physically support the plant," Nelson said.

Cool weather and plenty of rainfall meant Western corn rootworm were likely doing the backstroke in Sanstrom's fields this spring. However, he still dug roots searching for larvae.

He depends on a combination of crop rotation and pyramided traits for protection. However, rotation-resistant rootworm has been discovered in the region, and resistant populations of Western corn rootworm have already been found to all Bt proteins. European corn borer resistance to single-trait Cry1F Bt (Herculex) hybrids has also been found in Canada.

"I'm working with my seed adviser to make sure we have a mix of traits in the field," Sanstrom said, noting that above ground Vip3A traits are still effective against corn borer. "But I'm hoping for additional product answers soon."

Sanstrom ultimately uses scouting to develop a harvest plan. Most of his hybrids are fairly close together in the 108- to 112-day maturity range.

Start pinching and shoving stalks around R5 or black layer, Kleczewski suggested. "Push about 10 to 20 plants every 10 to 15 acres at chest height. Fields with 10 to 15% lodging are candidates for first harvest," he said.

Jay Magnussen, a Paullina, Iowa, farmer, likes to dissect weakened stalks. "I take a knife and cut the plant off at ground, split the stalk and try to identify the stalk rot so I can select a hybrid that has better resistance to that pathogen next year," Magnussen said. 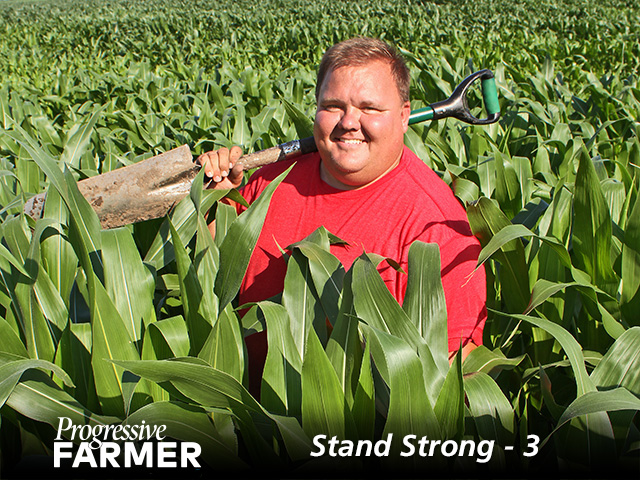