ROCKVILLE, Md. (DTN) -- The Illinois Department of Agriculture (IDOA) has agreed to move its cutoff date for over-the-top dicamba applications from June 30 to July 15 -- but only for June-planted soybean fields.

"Anyone who planted before June 1 will remain subject to the original planting date plus 45 days after dicamba application, while anyone who planted after the June 1 deadline will be required to adhere to the extended July 15 cutoff date," the agency said in a news release.

The decision is in response to the unusually late planting season that Illinois and much of the Midwest has experienced, said IDOA Director John Sullivan.

"We are in an extraordinary planting situation right now with extreme wet weather conditions," Sullivan told DTN. "So over the course of the last 30 days, we have heard from a number of individuals -- farmers, seed companies, ag retailers and others -- that are very concerned that because of late planting, farmers would not have the ability to use effective weed-control products on dicamba-tolerant beans and -- from a retailer standpoint -- that there is product that they had planned on selling that wasn't going to be sold."

All the other restrictions the IDOA originally issued in February via a Section 24(c) Special Local Needs label remain in effect, Sullivan stressed. That includes no spraying when the wind is blowing toward residential areas, checking a sensitive crop registry before application, and maintaining a downwind buffer for fields adjoining any Illinois Nature Preserves Commission site.

The IDOA had originally landed on a June 30 cutoff date for four dicamba herbicides: XtendiMax, Engenia, FeXapan and Tavium, which are registered for use on Xtend soybeans and cotton. The cutoff date superseded the federal labels, which only ban spraying 45 days after planting or after the R1 growth stage (V4 growth stage for Tavium).

Illinois was among the states dealing with a record number of dicamba injury complaints for the past two years: IDOA fielded 246 complaints in 2017 and 330 in 2018. See the DTN story on the original cutoff date enaction here: https://www.dtnpf.com/….

A number of other states have faced pressure to move their dicamba cutoff dates this spring, particularly from one dicamba registrant -- Bayer.

The company has been actively lobbying Minnesota state officials to extend or drop the state's June 20 cutoff date entirely, said Joshua Stamper, director of MDA's Pesticide and Fertilizer Management Division. The Minnesota Soybean Growers Association also petitioned the MDA to request that it move the cutoff date to June 27 for farmers in counties where less than 50% of soybean planting was complete by June 10. See that letter here: https://twitter.com/….

Likewise, the South Dakota Department of Agriculture has been under similar pressure from Bayer to move its June 30 cutoff date, Tom Gere, assistant director of the department's Agricultural Services Division, told DTN last week at a state regulator meeting.

For now, both Minnesota and South Dakota are holding firm. "We are keeping the cutoff date the same, June 30," South Dakota's Gere told DTN in an email Tuesday.

Stamper said Minnesota will also keep its June 20 cutoff date, which he believes may have helped drop dicamba complaints significantly in the state last year.

"Nothing good comes from auxin herbicide use late in the season," he said. "When we had our really bad year in 2017 -- which was the driver for our cutoff date -- and we did our analysis of complaints, more than three-quarters were coming from dicamba applications made after June 20."

The MDA released this statement on the topic Tuesday: https://content.govdelivery.com/….

Some in Illinois are concerned that extending the dicamba spray season into July this year will set the state up for another year of the high dicamba injury complaints.

The IDOA met last week to discuss moving the cutoff date with a number of farm groups, including the Illinois Fertilizer and Chemical Association (IFCA), which sent out a news release stating that it had lobbied to keep the June 30 cutoff date.

"At the meeting, we discussed how the reasons for having a June 30 cutoff still remain, namely: 1) to reduce the number of complaints; 2) to further protect sensitive crops and areas, especially trees, orchards, etc. from dicamba exposure; and 3) to be proactive and address the concerns of sensitive crop growers, citizens and environmental groups over the dramatic increase in off-target dicamba symptoms in Illinois," the IFCA wrote. "All of these concerns remain and must continue to be addressed to preserve the use of dicamba not just in soybean, but in other crops."

The IFCA is urging Illinois applicators to approach the dicamba spray extension with caution.

"Just because the cutoff date has been extended to July 15 is not a green light to apply this product in July," the IFCA wrote. "Many soybeans are still sensitive to dicamba and those growers are equally under duress this year to produce a successful crop."

See the IDOA's announcement of the cutoff extension here: https://ifca.com/… 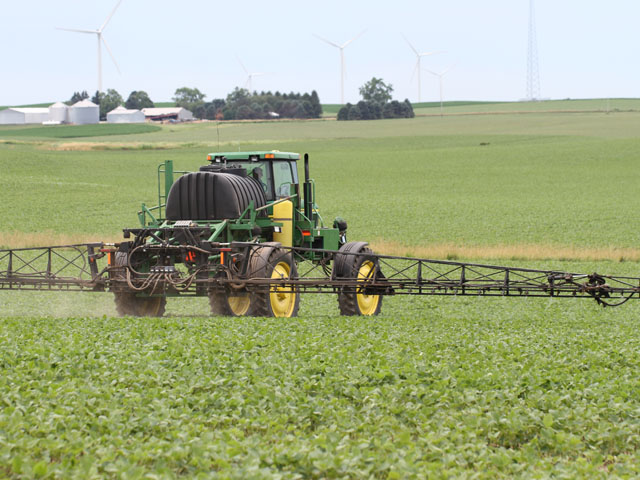