Jason Mauck cannot sit still. As a toddler, Mauck was once banished by his father to the sandbox and told to plant corn. He's been tinkering with the many ways to grow crops ever since.

These days, he takes his still-boyish enthusiasm and never-ending questions to the field, where he's bent on maximizing seed and sunlight through innovations such as relay intercropping.

He's not doing it like anyone else. Google the Gaston, Indiana, farmer. You'll find videos of him diagramming complicated cropping concepts on a farmhouse kitchen chalkboard with the fervor of an offensive coordinator in the last minutes of a playoff game.

Other clips guide viewers row by row as Mauck talks of flip-flopping the double-crop philosophy by putting the emphasis on higher-profit soybeans rather than wheat -- all while using biology of the cropping system to slash input costs.

He doesn't really care if you like his ideas, but he loves to share them. "What drives people nuts is I don't defend any of my beliefs," Mauck said. "If you have a better one, let's hear it. Most don't understand that I derive a lot of pleasure from waking up every day with a lot of things that are uncertain."

That's a difficult concept for farmers who use recipelike formulas or yearn for perfection. There's no surefire list of dos and don'ts with Mauck. What he tried last year is probably not going to be what he does the following. Part of him hopes he never figures it all out.

"I'm not sure I listen to the land as much as I watch my crop and interact with it," he said. He knows others question his lack of scientific methods, but he doesn't feel three years of data are necessary to know when to backpedal.

Big data and prescriptive technologies have a place, he admitted. "But, aggregated data and models do not typically reflect the things I'm seeing in my fields. And, so far, most of that information seems geared to what someone else wants to sell me," he noted.

Mauck has branded his own ideas into a business he calls "Constant Canopy." His first efforts have focused on turning the 4.5 million gallons of liquid manure generated from the farm's 25,000 head wean-to-finish confinement hog operation into cash crops in environmentally sound and profitable ways.

While a significant portion of the farm is still rooted in traditional monoculture corn and soybean production, this year he plans for 90 acres of experimental trials. There will be plenty of fun and funky tests with alternative crops like barley, hemp and sunflowers. But, after several years, what he's starting to refine is a system of teasing three cash crops out of two seasons.

A full rate of dicamba right before the wheat joints is typically the only weed control needed in the system. The growing wheat blankets the baby beans from cold snaps. Seed costs are reduced since the wheat-seeding rate (250,000 seeds per acre) runs about one-sixth of the usual rate for the area, and soybean populations (130,000 seeds per acre) are trimmed by about half of a traditional double-crop scenario.

"The wheat runs solely on the manure replacing N-P-K-S (nitrogen, phosphorus, potassium, sulfur), tillering out and filling that wide row. Replacing a custom dragline application with a reduced rate of 30% manure allows us to grow wheat at a net negative cost and get manure across more acres," Mauck said.

Last year, the relay soybeans got so happy they started to outgrow the wheat. He was forced to fit the combine with Flexxifinger brand attachments to move the soybeans out of danger during wheat harvest.

A few beans got a haircut, and he admitted there were several white-knuckled driving moments, but the fingers worked. He likes that they can be fitted to any draper head and adjusted to any row width.

"We bent those 2-foot-tall beans down to within 6 inches of the ground, and they bounced right back up like they were doing the limbo," he said.

The soybeans branched out in the sunny spaces the wheat left behind. The living roots and straw mulch helped control weeds and promote a between-the-row environment full of health and earthworms, Mauck said.

"Ag has become a game of solving logistical problems and lowering cost of production," he said. "Sixty-inch wheat seeded with a manure tank accomplishes several tasks. Follow corn's high carbon/nitrogen ratio with low population, deep-rooted wheat, and, I believe you will have consistently better soybeans than monocrop," he said.

Sometimes irreverent and often downright funny in his metaphors and analogies, there's a deeper meaning to Mauck's methods. He lost his farming father to pancreatic cancer seven years ago, not long after Mauck came home to farm. In late 2018, Mauck's uncle, who was an important mentor to him, died of a brain tumor.

Those incidents have led him to recognize the value of time and cherishing those around him. There's a reason his grandfather, who farms with him, a couple of towheaded toddlers, his wife Kortnee, and the occasional dog wander through his video frames -- they are the fuel that keeps his eclectic farming passions burning.

Mauck's goal, rather than to grow in scale, is to become more profitable by removing dependence on inputs such as commercial fertilizer. 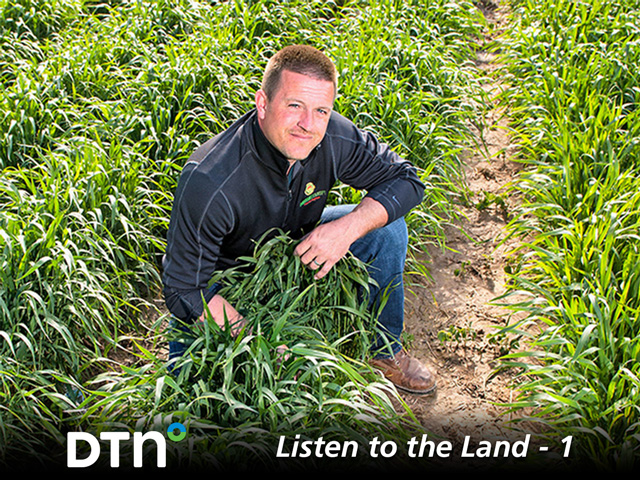