ROCKVILLE, Md. (DTN) -- Between new traits coming to market and the recent ag mergers, soybean seed catalogs are as thick as they are confusing this year.

Depending on your seed retailer of choice, growers have up to five different herbicide-tolerant trait platforms to pick from for the 2019 season -- some new, some merely under new ownership.

That's a lot of bean seed to digest, so we're here to help, with a breakdown of the latest information and availability of these weed control systems.

The original glyphosate-tolerant Roundup Ready 1 soybeans went off patent in 2015, which means individuals can grow them and save them for re-use as long as the seed has no other trait or varietal patents.

Although Monsanto, now Bayer, has phased RR1 out of its seed stock, some institutions such the universities of Missouri and Arkansas have done breeding work with this older trait and developed varieties using it. Growers should check with their local universities and state seed associations for information on RR1 availability.

First introduced in 2009, Roundup Ready 2 soybeans are still under patent. Although Bayer is transitioning to the RR2 Xtend platform, many seed companies still sell RR2 varieties and they will be available in 2019.

Xtend crop acreage estimates clocked in at 40 million to 50 million acres in 2018. The RR2 Xtend soybean trait, first developed by Monsanto, now belongs to Bayer, but will be available from a variety of seed companies via licensing agreements in 2019. It allows growers to spray dicamba and glyphosate postemergence over the top of the crop.

However, the only dicamba herbicides legal for postemergence use with this system -- XtendiMax, FeXapan and Engenia -- remain in regulatory limbo. EPA issued a two-year conditional registration for the three dicamba products and those labels expire this fall.

Official complaints of off-target dicamba movement this year were lower in some states compared to 2017, thanks to a rise in soybean acres planted to dicamba-tolerant soybeans this year, stringent new spray restrictions and some weather situations that prevented spraying. However, some Midwestern states reported more injury totals, and the trait also remains plagued by complaints of dicamba injury to non-soybean acres, such as specialty crops and trees.

The situation prompted some seed company executives and state pesticide regulators to ask for even more restrictive regulations on the use of dicamba herbicides in 2019, beyond the 2018 label adjustments. EPA was expected to make a decision on their registration in August, but has yet to do so.

"Our goal is to make a decision in time for growers to make informed seed purchase decisions for the next planting season," the agency told DTN in an email.

LibertyLink soybean technology confers tolerance to glufosinate (Liberty) herbicide. Bayer and MS Technologies collaborated to bring this technology to growers in 2009. For the 2019 seed sales season, the technology now rests in the hands of BASF, who purchased it from Bayer as part of anti-trust remediation.

LibertyLink has been steadily gaining market share as glyphosate-resistant weeds spread across the South and Midwest, said Jody Wynia, the U.S. soybean lead for BASF. "That's one of the reasons why it's grown to almost 20% of the soybean market share and why it's grown for five years in a row," he said.

"This technology has been around for a while, and it's a really good one for growers in today's market with low commodity prices," he noted, thanks to lower seed price and the availability of generic glufosinate herbicides.

The product will be available from BASF's Credenz soybean platform, as well as many independent seed companies, Wynia said. "[There are] about 78 licensees that support LibertyLink technology," he said.

GT27 soybeans, developed by MS Technologies, Bayer and Mertec LLC, confer tolerance to glyphosate and a new HPPD/Group 27 herbicide. The trait will be commercially available in 2019, but the corresponding herbicide, ALITE 27 (previously Balance Bean), is not yet registered for use in soybeans.

That means growers who plant this trait can't legally apply a HPPD herbicide over the top of it, Wynia said. Furthermore, Bayer developed ALITE 27 (Balance Bean) for pre-emergence use only, so postemergence use in soybeans will not be an option even once EPA approves it.

While some independent seed companies are offering GT27 soybeans as a standalone product, BASF is focusing on the commercial launch of the LibertyLink GT27 soybean stack, which will offer tolerance to glyphosate, glufosinate and ALITE 27. Although ALITE 27 isn't yet available, the stack will allow growers to control weeds postemergence in soybeans with both glyphosate and glufosinate for the first time.

The 13 available Credenz varieties with LL GT27 will range in maturity from group 0 to group 4.5, he added.

Growers will likely be tempted to spray generic HPPD herbicides on soybeans with the GT27 trait if ALITE 27 is not available in 2019, said Purdue weed scientist Bill Johnson. "There will be a lot of temptations to use it, especially if generics are lower cost than [other burndown herbicides]," he said.

Wynia urged growers not to do so. "I think we've been really clear with positioning of this product that LibertyLink GT27 soybeans aren't tolerant to all HPPD herbicides on market today, so there is a big risk of injury there," he said. "That's why we will have a unique product specifically for use on these soybeans."

Waiting in the wings are Enlist E3 soybeans, developed by Dow AgroSciences and MS Technologies, and now under the umbrella of Corteva Agriscience.

Neither Enlist E3 nor Enlist Soy + RR2Y are cleared for commercialization yet, as both traits are awaiting some final international import approvals.

Corteva is prepared to make Enlist E3 a major competitor in the soybean market once those approvals come through, Dillon said.

"If we were cleared for a commercial launch tomorrow, we could place products that are locally adapted from the North Dakota Red River Valley down to Mississippi and from the Rockies to the Atlantic," Dillon said. The company has spent a couple years ramping up seed production in maturity groups 0 to 5.8, with an ultimate goal of 0 to 7, he added.

"We'd like to get some feedback after harvest and updated information on regulatory approvals first," he said. 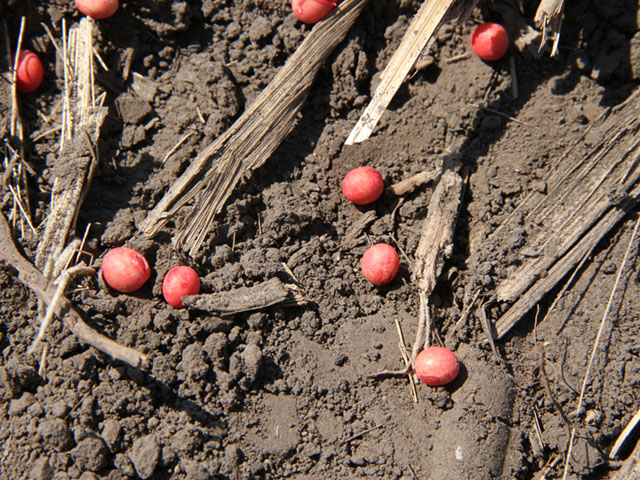