Those are the questions that compelled EPA to convene a Scientific Advisory Panel in Arlington, Virginia, this July for advice on how save the Bt technology of today, and tomorrow.

"EPA has concluded that the current [integrated refuge management] approach may be inadequate to mitigate resistance risks in lepidopteran pests of Bt," Jeannette Martinez, a senior scientist at EPA, told the panel.

Companies react too slowly to Bt resistance in the field, and current refuge requirements weren't built to adequately deal with the extent of Bt acreage, the biology of many lepidopteran pests and the behavior of growers using the traits, EPA concluded. The agency asked the panel to give expert guidance on these issues, which will shape EPA decisions on future Bt crop registrations and resistance management strategies.

The goal is not only to extend the lifespan of current Bt proteins but to protect the lone remaining Bt trait with no documented insect resistance in the U.S., Vip3A, noted Pat Porter, an entomologist at Texas A&M.

"We know the other toxins are failing, and we want to keep Vip3a effective for at least eight years or so until we get something else," he told DTN. "For Southern entomologists like me, we know that what is decided in this [Scientific Advisory Panel] will to a large degree determine how long Vip3a lasts."

COMPANIES TOO SLOW TO REACT

Scientists have documented insect resistance in the U.S. to all but one Bt trait on the market. In the South this year, farmers are spraying Bt cotton with insecticides to control large populations of Bt-resistant bollworm streaming out of Bt cornfields where most growers refuse to plant refuges. Farther north and west, growers are advised to scout most Bt hybrids for western bean cutworm and treat if they find it -- while still paying the technology fee that comes with the traits.

Martinez pointed out that EPA hasn't heard about these Bt failures from the companies that manufacture, sell and steward the traits.

"EPA has become aware of resistance cases in four lepidopteran pests of Bt, but only one was reported through the regulatory process in place," said Martinez. "Three cases were published by academic research scientists."

The IRM policies put in place by EPA for Bt crops were designed to make companies monitor and report resistance to Bt in a timely fashion. Instead, a combination of factors has laid the task of rapidly detecting, documenting and reporting Bt resistance at the doorstep of academic scientists, Porter noted.

Companies currently wait for reports of unexpected damage in a field to investigate and test for resistant insects. But by the time resistant insects make up enough of a population to inflict visible damage, the fight is over -- resistant genes are prominent within the insect population, Martinez noted in her presentation to the advisory panel.

To add to the problem, it can be difficult and time-consuming to successfully rear, test and formally diagnose resistance in lepidopteran insects in the laboratory. Industry and academic scientists routinely disagree on how best to do it, which can lead to inconsistent results.

Only once laboratory results are in do companies step in and start to "mitigate" the field resistance -- that is, advise the grower to rotate crops, change Bt traits or use pyramided products

"At best, implementing mitigation would start one year after the unexpected injury report, but for corn earworm, this would already be four to five generations past [the initial resistance report]," noted Martinez. "Lepidopteran resistance is likely widespread by that time ... because we are dealing with pests with big dispersal capabilities."

Into this large gap of time -- from the moment the first resistant genes surface in a field to the time companies finally notice, test and react -- step academic scientists. They often observe and test for resistant insects in their research plots much sooner and, most importantly, make their results public, Porter said.

But researchers aren't always guaranteed access to Bt seed to run tests, and their results and conclusions about Bt resistance are sometimes ignored or downplayed by industry, Porter noted. Rarely do they inspire a change in resistance management from companies, where decisions are driven more by economic forces, he said.

"Some of us now realize that our real jobs might be in helping deal with the consequences of resistance -- as the [integrated refuge management] plans will be what they will be for better or worse," Porter said.

Beyond slow reaction times, EPA presented the panel with a series of additional problems with the current Bt crop management that have spurred insect resistance in ear-feeding pests:

-- Most Bt traits were registered with the assumption that they were "high-dose" -- that is they killed 99.99% of insects exposed to them. As it turns out, with the exception of stalk borers, this is not true of most lepidopteran pests, which survive Bt exposure at higher rates than expected (low/moderate-dose). For these low-to-moderate-dose pests, the current Bt refuges are not adequate -- hence the rise in Bt resistance in cotton bollworm (corn earworm), fall armyworm and western bean cutworm.

-- Secondary pests of corn, namely western bean cutworm, have become more prominent in parts of the country, and current Bt refuge management strategies are not designed to manage resistance in them.

-- Many insects have "cross resistance" to multiple Bt traits, because of the similar mode of action among some Bt proteins.

-- The same or very similar Bt proteins are used in both corn and cotton, which gives insects repeated exposure to the same traits within a single growing season. This is particularly problematic in the South, where a pest like corn earworm is exposed to Bt in corn before moving to Bt cotton.

-- "Pyramid" Bt products, which contain multiple Bt proteins, do not function as they should. Insects are often resistant to all but one of the traits within the pyramid, functionally rendering it a single-toxin product, with a smaller refuge.

-- Refuge compliance is very low in the Southern U.S., despite adequate education.

WHERE DO WE GO FROM HERE

In addition to EPA's presentation, the panel heard from Bt registrants -- Syngenta, Monsanto and Corteva (formerly Dow AgroSciences and DuPont Pioneer) -- as well as industry groups.

Their comments boiled down to two requests to EPA. First, all of them asked the agency not to design new resistance management strategies based on secondary pests, like western bean cutworm, but rather focus on primary pests, like bollworm.

Second, led by Monsanto, a number of company and industry representatives asked the panel to consider allowing seed blend (RIB) corn hybrids with Vip3A to be marketed and sold in the Southern U.S., despite academic research showing this type of refuge can speed resistance in ear-feeding pests. Monsanto and Corteva presented data from company studies that they said show the practice is comparable to block refuges, given low grower compliance in the South.

The Scientific Advisory Panel will produce a report with their recommendations on these issues to EPA in September -- and then the agency will have to decide how to fix the current system of managing Bt resistance, Martinez said.

"The goal for this meeting is to receive science recommendations from the panel that will provide support to improve the current IRM program and extend the lifetime of Bt [plant incorporated protectants] or future technologies coming," she concluded. 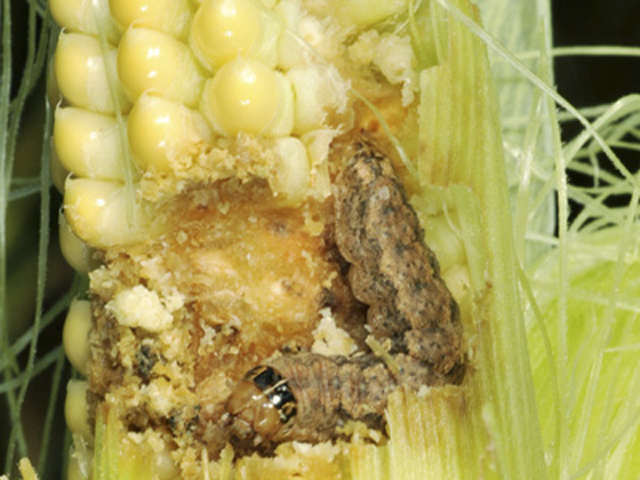