Farming in a great environment has put big corn yields in the bins for Vern Frederickson and his family for years. But, for the Fredericksons, aided by their agronomist and seed suppliers, they've pushed yields to exceptional levels in the past decade.

Vern explains why his daughter, Kristen Corpus, placed third in the A No-Till/Strip-Till Irrigated class of the National Corn Growers Association National Corn Yield Contest in 2016 with grain harvested from a family field while he came up empty-handed. "My wife, Suzi, and I screwed up our paperwork, so Kristen was our only entry," he said with a laugh. But, regardless of whose name went on the winning entry, superior management is evident in the results.

Corn is only part of the large Frederickson family farm, which totals 6,000 acres near Hermiston, bordering the Columbia River in northeastern Oregon. There's also a hay export business managed by Vern's brother that ships alfalfa bales to dairies in the Pacific Rim and Middle East.

Besides corn and alfalfa, irrigated cropland produces wheat, potatoes, onions, and occasionally other crops in an arid environment that averages only 8 inches of rain per year. All crops are irrigated through center-pivot units fed by either wells or the Columbia River.

If there's a drawback to farming here, it's the stringent regulations governing how much of certain inputs may be applied to crops for protection of groundwater. Frederickson and his agronomist, Tim Tallman, have learned to function effectively within these rules.

"In 2014, our contest yield was 280 bushels per acre," Frederickson said. The next year, it was 314 bpa. Last year, Kristen won with 339 bpa. The family has been the Oregon state winner the last three years.

"The year before we won the first time, Suzi and I went to the annual [NCGA] meeting in San Antonio on our own, and the Oregon winner had about 180 bushels. Suzi said we should enter."

Commercial yields have climbed right along with contest yields. In fact, Frederickson and Tallman don't pamper certain plots for the contest; instead, they carve likely spots out of commercial fields.

"Ten years ago, our good yields were in the 200-bushel range," Frederickson said. "In 2016, the farmwide average was about 300 bushels per acre."

Frederickson and Tallman grew more serious about advancing their corn production with more precise seed placement eight to 10 years ago. They saw a graphic demonstration of how irregularly spaced plants could hurt yields.

"It was a field of small grain we worked up and planted to corn," Vern said. "We were shocked at the poor stand, because we didn't get the bed prepped right. That was a real eye-opener."

"We get a better, more consistent stand with better seed placement with these meters," Tallman said. "The distance between seed is much more precise. If you get seeds too close together, you end up with very small ears." The Fredericksons plant 38,500 seeds per acre 5 1/2 inches between each seed.

Better seed placement was just the beginning. "This is a holistic process," Frederickson said. "As soon as you start paying attention to one piece of it, you pay attention to the other stuff, as well."

The Fredericksons strip-till work is done with an Orthman 1tRIPr ahead of each of their two planters. The result is a clean, level seedbed created in a single pass.

"The 1tRIPr has a set of coulters that throw dirt out, then a ripper point goes 10 to 12 inches deep," Tallman said. "We have two planters. One of our 1tRIPr's is pulled just ahead of the planting pass, and the other is done in the same pull as the planter."

The two men order preplant soil tests, and they have EC (soil electrical conductivity) mapping done on some fields to better understand a field's fertility environment.

"Based on those, we put together a preplant fertilizer and planter band fertilizer plan prior to planting," Tallman said.

Frederickson and Tallman apply a total of about 350 pounds of nitrogen per acre on most of their corn land. Most is added in multiple in-season applications through irrigation.

An independent service provides irrigation scheduling, guided by neutron probes to measure soil moisture in every field. Real-time moisture probes are moved over to corn once they're done in potato and onion fields, as well.

They spend a half day reviewing yield maps.

"We look at curves to see downtrends or uptrends, and may adjust nitrogen applications where needed," Tallman added. "There are points in time when we didn't make the application soon enough or did it too soon."

"We have microclimates out here, and we have to manage those the best that we can," Zander noted. "But, at the end of the day, this is a wonderful climate with almost zero thunderstorms. Almost every day is sunny, and there's not a lot of disease pressure because of the Fredericksons' diverse rotations."

"They're regulated on how much nitrogen they can put on, so they have to be very aware of all the little details," noted Dave Heimkes, the Monsanto agronomist who visits the Frederickson farm post-harvest. "It gets down to timing applications for environmental impact but also to get the most bang for the buck. We have to make sure that we have what we need at certain stages of plant growth. There are no extras in that program."

"FieldView turns every acre into a test plot," Heimkes said. "When you have a yield map spanning your farm, you can see what's happening. It gives you a whole different dimension. I'm a corn nerd. I'm always looking for another layer of information." 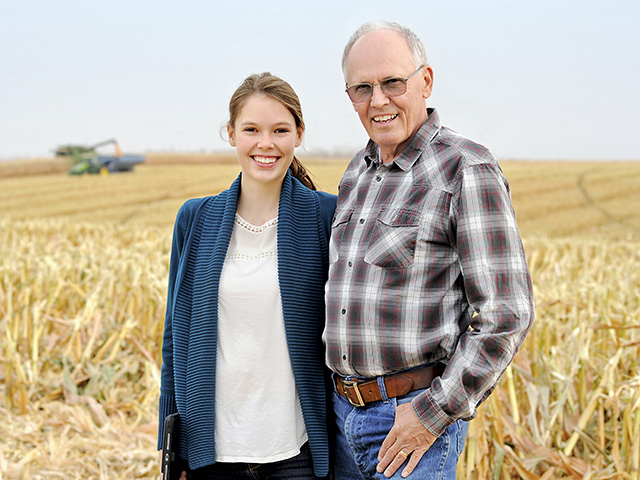