Grandpa licked a finger and held it up to check the direction of the wind. Back then, that was the state of technology for checking the weather. Today, a high-tech on-farm weather station can track your cell phone and send text message alerts when the wind is about to rise in your exact location.

New technologies for watching the weather are vital these days, especially when the spray rig is filled and ready to hit the field. As we saw last year with off-target issues with dicamba, lack of knowledge about winds and temperature inversions can turn a day of spraying into a nightmare if chemicals drift off-site.

"We can't control the weather, but we can control the conditions in which we spray. We don't have to spray right now. We have to be disciplined about when we choose to spray," said Jim Reiss, vice president of product development for Precision Laboratories. His company makes adjuvants, tank-mix partners, water-conditioning chemicals and drift-reduction agents for agricultural sprayers. In his past life, he was both a custom applicator and spent 12 years working with dicamba for a basic herbicide manufacturer.

A low-tech way to measure and record wind speed and direction requires only a few simple tools, said Bob Wolf, who teaches proper spray techniques at the Applicator Training Course (ATC), in Bloomington, Illinois. "We actually do an outside exercise where we use a device to record the direction of the wind, a compass to get the actual degrees of the direction and a wind meter [anemometer] to determine the speed."

A handheld anemometer such as Wolf's is an inexpensive and versatile tool to carry in the sprayer cab. From a couple hundred dollars to less than $50, there are plenty of choices, including some anemometers that also measure temperature and humidity.

More sophisticated is John Deere's Mobile Weather, which uses sensors attached to the outside of the sprayer for documenting real-time weather on a display in the cab. The system measures and records wind speed and direction, temperature and relative humidity. Mobile Weather can alert an operator if conditions vary beyond set parameters.

Field weather stations can provide even more information. For instance, the DTN Weather Station can generate a 15-day forecast before a planned spray date. Three days from that date, the system will begin giving hour-by-hour forecasts about wind conditions. If the forecast changes, the applicator can adjust his plans to fit.

A DTN weather station in the corner of a section will give accurate data for the surrounding four sections, about a 1.25-mile radius. "That's what drives your forecast," said Todd Meyer, vice president, ag sales.

Having a local measure of wind speed and direction is better than one based on data from a remote weather station because, "A lot of people think wind is uniform," Meyer said. "The reality is that it is not. Wind is like precipitation: It is very spatial for a lot of reasons." Hills, trees and even lakes can influence wind patterns, so having precise, local readings are key to informed spraying.

Wind, of course, is only one factor to consider when making spraying decisions. Precipitation is an obvious second factor. Not so obvious but extremely important is the possibility of temperature inversions.

In an inversion, the air layer at ground level is cool. The middle layer of air is warmer. A cooler layer sits on top of the warmer air and prevents it from rising as usual. The warm middle layer can contain moisture, which you might see as mist. It also can contain newly sprayed herbicide that has not bonded to the target. This trapped middle layer can float for miles, carrying with it the potential for damaging other crops or vegetation.

Inversion has gotten some of the blame for dicamba damage last year. "I have spent almost 30 years training applicators, and this is the first year that the message about inversion finally got attention," Wolf said.

Conditions are often right for inversions in early mornings, late afternoons and into the night. That fact led some states recently to restrict dicamba spraying to the middle part of the day.

Unfortunately, inversion is not easy to detect. Reiss suggests applicators first rely on their senses. "You can feel an inversion," he said. If there is no wind in the morning or late afternoon, an inversion is more likely.

You can smell an inversion. If you smell smoke, for instance, but can't see where it's coming from, "That's a good indicator that an inversion is happening," Reiss said.

You can see an inversion. If smoke rises then goes laterally, "that's clearly an inversion," he said. Road dust hanging in the air is another indicator.

You can hear an inversion. During an inversion, sound travels farther than usual, "like that train that's so far away you don't often hear it, or a tractor working in a faraway field," Reiss said.

Higher-tech methods for detecting inversions are still developing. Taking temperatures at ground level and several feet higher is one option but is cumbersome. Wolf is testing a portable prototype device that will make it easier and can be carried in a sprayer or tractor cab. Also, the Delta T measurement on Deere's Mobile Weather system indicates change in temperatures, which can give a hint inversion is setting up. Some mobile apps also show area inversion reports.

Meyer said DTN is developing forecasting engines and alerts on its weather stations for temperature inversions. The goal is to produce daily or hour-by-hour risk levels for inversion in the form of green, yellow or red alerts. The company plans to have the technology available in the first quarter of 2018.

In the meantime, Reiss urged: "Look at your wristwatch." It's pretty likely you will have an inversion at certain times of day in the spring and summer.

Jim Patrico can be reached at jpatrico@gmail.com 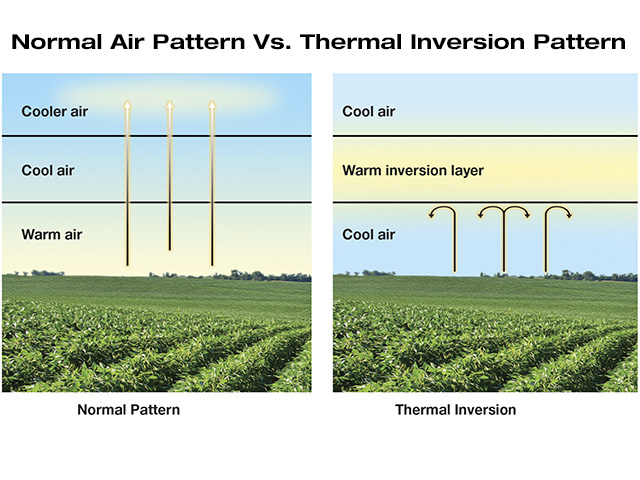