NEW ORLEANS (DTN) -- The global outlook for phosphate fertilizer appears to be well-balanced into the coming years, according to the presenter for the phosphorus (P) outlook at the 2017 Fertilizer Outlook and Technology Conference held in mid-November in New Orleans.

Juan von Gernet, head of marketing in Europe for PhosAgro, said world P demand is on the rise with certain regions leading the way. At the same time, some countries are cutting P production and consumption, including the U.S.

Global P demand is forecast to grow by 3.0 million metric tons (mmt) by 2022 with higher consumption in Latin America, southeastern Asia and Africa, said von Gernet. This should help bring balance to the market, following the large amounts of capacity added in recent years.

The demand growth for P is occurring in various regions of the world, von Gernet reported.

Strong fundamentals remain in place in Russia that would explain why P demand is on the rise, von Gernet said. These factors include restricted food imports, increased agricultural subsidies and the positive gains for the Russian ruble versus the U.S. dollar.

A surprising development in the increasing global P demand is large increases in Africa, he said, with 27 of its countries showing more than 5% demand growth this year, von Gernet said. "That was something I would have never expected."

Another region seeing robust growth in P demand is Latin America. The area has much possibility for future growth potential, he noted.

The reason for Latin America's increasing P demand is higher local prices for soybeans are encouraging farmers to use more fertilizer that remains affordable for them, von Gernet explained.

Still, a global balance of P fertilizer is possible because some regions of the world are cutting back in both production and use, von Gernet said.

The reason for the falling U.S. P production is because companies have invested very little money in new mines in the country and have been utilizing reserves for production. Also, some P production in the U.S. was taken offline in 2017 due to hurricane damage, he added.

In addition to decreasing U.S. P production, China has seen a drop in total P use, von Gernet said.

There has been some debate on whether P demand has fallen because of the removal of a key corn subsidy in October 2015 in China. The corn price has declined 23% since the subsidy was removed, he said.

"Chinese farmers are being more price-conscious with the lower corn price there," he said.

At the same time, Chinese DAP/MAP fertilizer exports are on the rise, he said. In 2016, 33% of the P produced was exported, with 37% of the nutrients produced in 2017 expected to be exported.

One interesting development in the global P market is the concentrated effort to increase P manufacturing in India, according to von Gernet. The Indian government is pushing hard for more local Indian P production to reduce their reliance on imports.

Looking at the medium-term outlook for the P market, new P supply is expected to come online, according to von Gernet.

Expansions are planned, totaling 13 mmt proposed in 22 countries around the world through 2022, he said. However, only 10%, or about 1.3 mmt, are considered to be firm projects, which is encouraging for the medium-term market balance. 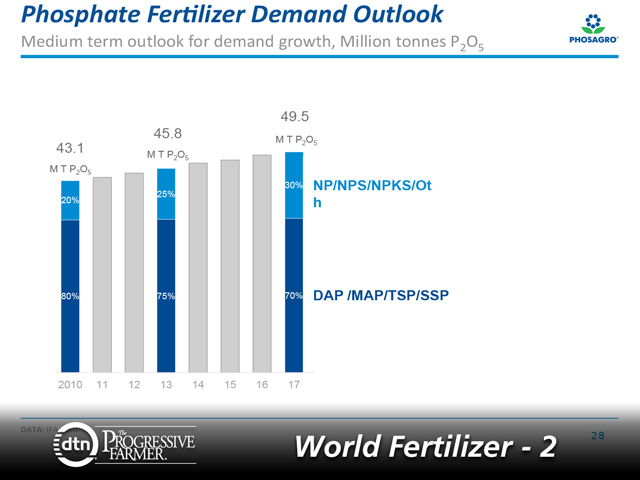