Soybean yields almost always seem to take us off guard. But the super yields being reported have some of us asking "Why?" while offering thanks for being among those experiencing wonder rather than disappointment.

Emerson Nafziger pegged 2017 yields as the most surprising he's seen in over 30 years of working as an agronomist at the University of Illinois. "In Illinois, (ending) soybean yields were not as eye-popping as for corn, but our expected state average of 58 bushels is only one bushel less than last year," he noted.

Yields could have been mediocre if 2017 weather records were any indication, Nafziger told DTN. "Timely rainfall made a big difference for the guys who got it. Plants were shorter and pod numbers and seed size were good. High temperatures in September in the upper 80s and 90s (Fahrenheit) pushed a strong finish on both corn and soybeans," he said.

Pat Reeg, agronomist with Pioneer in Illinois, attributed at least part of unexpected higher yields in 2017 to the more resilient nature of modern genetics. "Soybeans have the innate ability to hang in there and come back when weather moderates in August. In 2017, we were hot and short on moisture during July, but fortunately started the season with a full soil profile. Come August, we didn't experience the traditional jungle environment with heat and humidity. Temperatures were moderate, nights were cool and ET (evapotranspiration) was reduced. And timely rains in August and early September helped preserve the yield of beans for many farmers," Reeg said.

The past two years have been a contrast in conditions across much of the Soybean Belt. In 2016, many growers reported personal soybean yield records following a nearly ideal weather season. The spring was early and not too wet or cold during planting. We experienced frequent rains and moderate temperatures all summer with very little stress. We expected high yields and were gratified by the results.

On our farm in northeast Nebraska, we experienced the same: 2016 yields averaged over 70 bushels under high management, which includes early-planting narrow rows and foliar protection and feeding.

The 2017 season was quite different. Spring started out early, warm and dry, but turned cold and wet by the time bean planting rolled around. Growers either experienced delayed planting or saw stressed early planted beans. More than a few fields were replanted. By mid-to-late June, conditions had turned dry and stayed dry through July, accompanied by high temperatures. In August and early September, depending on where you farm, it either stayed relatively dry with sporadic showers or showers were frequent and abundant.

On our farm and in our neighborhood, we experienced consistent rains in August and early September and expected good soybean yields because, as another saying goes: August rains make grain in soybeans. Yield reports in our area are averaging 65 to 70 bushels, a bit lower than 2016, but no complaints.

The downside of the frequent and ample early rain, such as in 2016, is that soybeans tend to produce excessive vegetative growth and can easily become tall and lodge. All the energy put into building vegetative growth means that the plant must continue to put energy into supporting that growth throughout the season and up to R7 when the crop starts to yellow. This may put a slight damper on yield potential.

The dry spell in June and hot and dry spell in July stressed the 2017 crop. That stress slowed and reduced vegetative growth. Remember the drought of 2012 when corn failed, soybean growth stalled and then recovered when rains returned in August? Surviving plants immediately put energy into filling pods instead of growing leaves, and yields were much better than expected and often close to normal. July conditions slowed vegetative growth, plants went into survival mode and when cool weather and rains returned in August, the plant put energy into producing yield and not foliage.

Michigan State University Extension agronomist Mike Station writes that when air temperatures exceed 95 degrees, plants will drop leaves and abort flowers and pods, resulting in less pod set. Once rainfall returns, soybeans will flower again, up to R5, and produce enough pods to compensate for those lost. The R5 stage occurs in August, so plants benefit from cooler weather and rain by producing more flowers and pods and yield potential can still be met. You can read that report here: http://bit.ly/….

An article posted in 2017 by Iowa State University reviews the influence of drought on corn and soybeans. Soybean root growth increases during drought conditions because plant carbohydrates are shifted to root growth. When adequate rainfall or soil moisture returns, vegetative growth will resume until the mid-seeding filling stage (R5.5) when the focus turns solely to reproduction.

This paper also notes that drought and heat have a smaller influence on soybeans than corn due to its overlapping vegetative and reproductive stages and ability to compensate for an early stress by the later growth spurt. Read that paper here: http://bit.ly/… 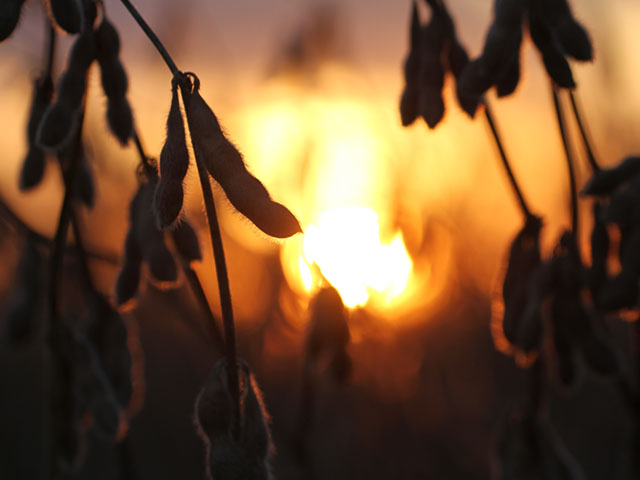