LITTLE ROCK, Ark. (DTN) -- Arkansas State Plant Board members voted Nov. 8 during a public hearing and board meeting to approve regulatory changes for the application of products labeled for agricultural use that contain dicamba.

In a vote of 10 to 3 with one member recusing, the board voted to prohibit the use of dicamba in Arkansas between April 16 and Oct. 31. The regulations include exemptions for the use of dicamba in pastures, rangeland, turf, ornamental, direct injection for forestry, and home use. The regulation change is now subject to final approval by the executive subcommittee of the Arkansas Legislative Council, according to Terry Walker, Arkansas State Plant Board (ASPB) director.

"It is out of the Plant Board court now and in the hands of the legislature as soon as the final rule is filed," Walker told DTN. He added that because this is a hot issue, it is possible the legislature could get it on the next calendar or call a special session to deal with it separately.

The ASPB moved the meeting to a local hotel to accommodate the number of people both attending and asking to testify on the proposal. Evidence that this was no ordinary hearing was evident in the armed security on hand for the event. While the public hearing passed peacefully, the preparation speaks to the contentious nature of the dicamba issue that has increasingly divided farmers, university faculty and industry.

The day started with the board quickly addressing Monsanto's recent request that Terry Fuller, who represents the Arkansas Seed Growers Association on the board, be disqualified from participating in the hearing. The company claimed Fuller had solicited public support for the cutoff date and showed bias. Fuller was allowed to defend his position and the board unanimously supported to deny Monsanto's request. However, Fuller recused himself from the vote on the cutoff proposal when it was cast.

The Plant Board limited the public giving comments to five minutes and generally alternated between those in favor or against the cutoff date proposal. Department of Agriculture Communications Director Adriane Barnes said 37 individual public comments were presented (17 for regulation and 20 opposed) during nearly a three-hour period.

Farmers lined up on both sides of the aisle with many of those against the proposal asking for a compromise pushing the April 15 cutoff date out to May 25 to allow for some in-season use. The May 25 date was also seen as a way to soothe what some see as a situation that allows southern Arkansas growers an advantage since their season often starts earlier.

Those who fought against the limits cited the desperate need for weed control to fight back against Palmer amaranth resistant to glyphosate and other herbicide chemistries. They also cited clean fields and efficiencies realized by the technology.

Scott Partridge, vice president of global affairs for Monsanto, reiterated what he told DTN earlier this week that the company received more than 1,400 inquiries from its customers about off-target movement of dicamba. Out of those reports, he said about 91% of those told the company there were critical aspects of the current label not followed when applying. "All of these causes are readily fixable with training and education," Partridge said. He and several Arkansas farmers noted that without these tools, the farmers in the state would be put at a disadvantage.

Chemical trespass and the need to protect sensitive crops dominated the arguments on the other side of the fence. Farmers with non-GM contracts, sweet potatoes and peanuts all talked about the vulnerability of their crops. Shawn Peebles, an organic farmer from Augusta, noted yield loss isn't a question in crops like his that aren't marketable if hit by drift.

Danny Finch, a Jonesboro, Arkansas, farmer and ASPB member, said he was relieved by the final outcome. "I feel like what we did was necessary to protect the people I'm on this board to represent," he told DTN.

Finch at one point during the committee hearing took exception to comments that there were not enough farmers serving on the ASPB to understand the situation. He asked for the farmers on the board to stand and eight rose to their feet. There are 16 voting members on the ASPB. The governor has seven appointees; industry groups elect nine members. Two members represent the UA agriculture division, but don't have voting powers.

Finch also said that, over the past six years, dicamba has been on the meeting agenda 55 times and that the board has spent countless hours on the issues.

The board's regulatory changes concerning the use of dicamba were subject to a 30-day public comment period which ended Oct. 30. More than 29,000 public written comments were received by email, mail and fax.

Matt Smith, who farms in Mississippi County, testified that he'd spent hours sorting through all the public comments and that the vast majority of those comments supporting the ban came from activists and not Arkansas farmers. Smith favored a compromise date of May 25. He said many of those opposing the ban were in favor of the compromise date and tended to live in areas where pigweed pressure is heaviest.

The Plant Board meets again on Dec. 12 for a public hearing and board meeting to consider more proposed regulations that would clarify their ability to request additional information about a pesticide before it is registered for use in the state of Arkansas.

Also hanging over the ASPB is a pending lawsuit filed by Monsanto for the previous ban of its XtendiMax herbicide. Walker said board members have not yet been served papers in the suit.

For more information on dicamba issues in Arkansas go to: www.aad.arkansas.gov. 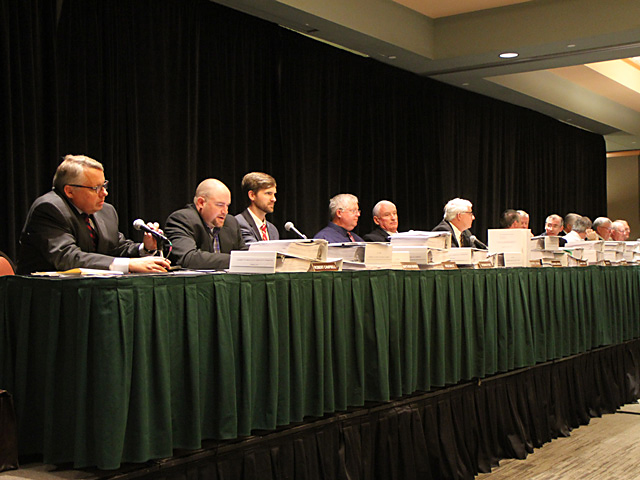