Scouts on the tour through Kansas were warned that it might be hard to assess yields with the winter conditions that hit over the past few days.

So far, the route with DTN's intrepid reporter has measured fields estimated to yield a high of 76 bushels per acre to a low of 37 bpa, for an average of 50 bpa over five stops. This central area of Kansas averaged 55.4 bpa in 2016, according to USDA.

The route DTN is following has seen only small amounts of frost damage so far. Ken Wood, who farms near Chapman, and is president of the Kansas Association of Wheat Growers, said it would take several more days to assess if there is any damage in his fields. He said a slight breeze might have actually have helped protect his fields when temperatures dipped last week. Above average rainfall has been another concern with too much moisture with more rain in the forecast.

Wood had sprayed his field with a preventative fungicide treatment. Spray planes were laying down treatments on Tuesday as well. Disease is being spotted in some fields with barley yellow dwarf virus the most prevalent so far.

Scouts are headed west and have not reached the areas that were hard hit with snow.

Throughout the morning, scouts were pulling fields with stunted, twisted heads, saw aphid infestations in some areas and other fields with powdery mildew 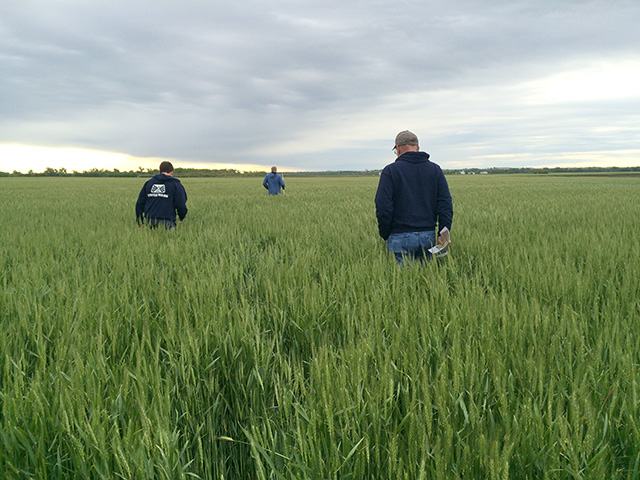