DECATUR, Ill. (DTN) -- Growers of dicamba-tolerant crops now have three registered dicamba herbicides for use in-crop over soybeans and cotton for the coming season. The latest in the lineup is DuPont's FeXapan herbicide plus VaporGrip Technology.

FeXapan is a single active ingredient product that contains only dicamba as a diglycolamine (DGA) salt. VaporGrip is an additive designed to keep the dicamba in a less volatile state compared to older DGA formulations, such as Clarity.

Dave Johnson, DuPont product development manager soybean herbicides and traits, told DTN that DuPont is sourcing the FeXapan from Monsanto under a distribution agreement. However, he noted: "We will sell it, service it and include it within our DuPont full acre weed control solutions for growers."

Johnson observed that there's a critical need to find effective solutions for controlling herbicide resistant weeds. However, he added that the new herbicide-tolerant system should not be viewed as a rescue treatment, but rather as part of a complete weed-control program. "This is just one component of an entire system," he said.

FeXapan is identical to Monsanto's dicamba formulation known as XtendiMax with VaporGrip, but will be branded, labeled and sold by DuPont. BASF has also registered a lower volatility formulation called Engenia, a BAPMA salt of dicamba. All three products will be available for use in Roundup Ready 2 Xtend soybeans and Bollgard II Xtend Flex cotton in 2017, pending individual state approvals.

DuPont Pioneer brand soybeans with the Xtend trait debuted during the 2016 season and the company is continuing to build on that integrated seed and herbicide platform. More than 30 Pioneer varieties in the 2017 lineup carry the Xtend trait. While Pioneer does not sell cotton varieties, FeXapan also received a supplemental label for use in cotton, Johnson said.

FeXapan required its own registration from the Environmental Protection Agency (EPA), but Johnson said the supplemental label for the herbicide mirrors that of XtendiMax. Like the other new dicamba formulations, EPA gave FeXapan a two-year conditional registration that expires Nov. 9, 2018, and a long list of label restrictions.

At this time, the FeXapan label allows no approved tank-mix partners and only one approved nozzle, but Johnson expects that to change and encouraged applicators to monitor the website FeXapan.dupont.com as the company goes through the necessary process to gain access to additional tools. Because the formulation is identical to XtendiMax, Johnson said there's a possibility that shared data could be used in the approval process.

Monsanto's XtendiMax received approvals for 20 nozzles in recent days -- all configured to deliver coarse to ultra-coarse droplets. Engenia has received a few tank mix partner approvals in the past week, but there's no word yet on whether any active ingredients will be listed. Johnson would not comment on whether DuPont is eventually pursue a branded low-volatility premix that would be a combine dicamba and glyphosate.

Applicators also need to check for special state restrictions. Arkansas, for example, has ruled to ban DGA-based dicamba applications between April 15 and Sept. 15. Other states have set more stringent wind speed limits and are requiring mandatory training before the dicamba products can be purchased.

Stewardship and teaching applicators how to implement the label requirements will lead DuPont's efforts going into the spray season, Johnson added. "We're encouraging customers to take our online training, come in for face-to-face training and take advantage of webinars -- we will be providing a variety of opportunities," he said.

The incidents of off-target and illegal dicamba usage in 2016 are examples of how not to apply these products, he said. "Our focus is on how to do this right," Johnson said.

"The label is the law. It's important that growers and applicators understand them and why they important. Part of our job is to help them do that and be successful," Johnson said.

The federal label restrictions for FeXapan include:

-- No use of ammonium salt products such as ammonium sulfate (AMS) or urea ammonium nitrate (UAN).

-- Applying a minimum of 10 gallons of spray solution per acre.

-- Use designated nozzle and operating pressure as listed on the company website.

-- Use ground speeds that deliver desired spray volume while maintaining spray pressure, but that do not exceed 15 miles per hour (mph).

-- Maintain booms at a maximum of 24-inches above the crop canopy or target pest.

-- Weed height should not exceed 4 inches.

-- Herbicides should not be applied to soybeans later than R-1 growth stage, regardless of weed height.

-- Do not apply when wind is blowing toward an adjacent sensitive crop. 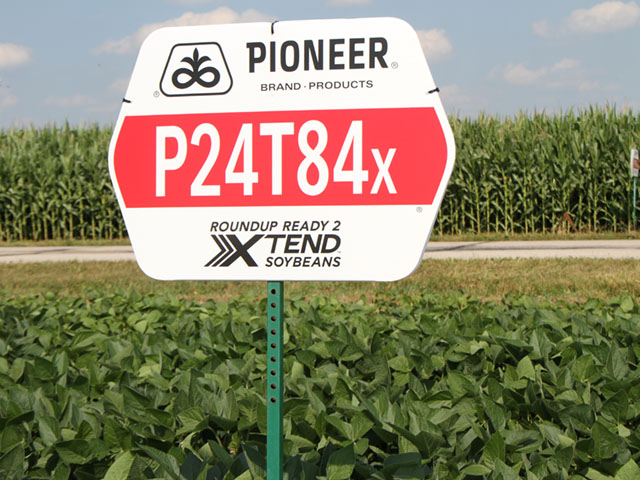