ROCKVILLE, Md. (DTN) -- Bollworms invaded the South this year -- and they came hungry.

"We had a tremendous bollworm population this year in soybeans and cotton and grain sorghum" in many areas of the state, said University of Arkansas Extension entomologist Gus Lorenz. "It was a rolling population that started in late June and went through July and August."

The intense pest pressure brought a low-lying problem to the surface: the slow decline in efficacy of dual-toxin Bt cotton against the bollworm, entomologists told DTN.

"We're seeing what most acknowledge is resistance to the Cry1Ac toxin," said David Kerns, an entomologist at Louisiana State University, who recently conducted diet bioassays on Bt-resistant bollworms from the past two seasons. Bioassays done by another entomologist, Dominic Reisig of North Carolina State University, showed similar levels of resistance, Reisig told DTN.

Kerns' and Reisig's tests confirm what Southern researchers have been observing for nearly a decade, said Jeff Gore, a Mississippi State University entomologist. Field data collected from Mississippi and Arkansas between 2005 and 2014 show a slow, but steady, increase in the amount of damage done by the bollworm on both Bollgard II and Widestrike cotton squares.

"What we've noticed for the past five or six years is a shift in bollworm behavior," Gore said. "We're seeing more and more larvae survive in the top of the plant, feeding on small squares, which is what we used to see with non-Bt cotton."

The addition of Syngenta's Vip3a protein in the next generation of three-toxin cotton products should be a boon to cotton growers, Kerns noted. Found in Dow's Widestrike 3, Bayer's TwinLink Plus and Monsanto's Bollgard 3 (which isn't commercialized yet), the trait works well against this pest.

"I think we can still have issues under high pest pressure conditions, but for the most part, control should be much better," Kerns said. "But anytime you lose a toxin, there's going to be concern because of the added pressure on the other ones," he added.

A BAD YEAR FOR A WEAKENING TRAIT

From the deep South up into the Southeast, many farmers had to spray Bt cotton multiple times to control bollworm this year.

This isn't an unprecedented situation for cotton growers, the Southern scientists pointed out. As the first Bt cotton trait on the market in 1996, Cry1Ac never controlled bollworm as effectively as it did the tobacco budworm, the primary target. "Even when Bt cotton first came out, we saw significant infestations of bollworms in Bt cotton," and multiple sprays were made every year to minimize yield losses, Gore said.

Then dual-toxin cotton traits came to market -- Bollgard II (Cry2Ab + Cry1Ac) in 2003 and Widestrike cotton (Cry1F + Cry1Ac) in 2005. The increased expression of Cry proteins helped the plants ward off bollworms more successfully for a little while, but sprays were still needed when bollworm pressure was high, Gore said.

Given Cry1Ac's limited protection, however, it was "not a surprise" when scientists saw the dual-toxin products' efficacy weaken over the next decade, Gore said. Widestrike varieties were especially at risk, given that Cry1F is not very effective against the bollworm and has only "sub-lethal effects" on it, Reisig noted.

"Cry1F is weak on bollworms anyway, so if you get resistance in Cry1Ac, it pretty much renders the [Widestrike cotton] plant ineffective," Kerns said.

The heavy waves of bollworm populations that started in June and continued through August put enormous pressure on these products and brought these weaknesses to light in the form of a lot of unexpected Bt cotton damage in 2016, Reisig said.

In a written statement, Dow told DTN that this increased pest pressure "accounts for the majority of the signs of reduced efficacy that some growers experienced" this year, but "industry, university and regulatory scientists recognize the possibility of susceptibility changes."

Monsanto acknowledged the reports showing "a change in the level of control of cotton bollworm" in Bt cotton but said it "has not caused major economic impacts to growers and we have received few grower complaints about Bollgard II performance."

Both Dow and Monsanto have added Syngenta's Vip3a protein, which has good efficacy against bollworm, to their next generation of Bt cotton traits -- Widestrike 3 and Bollgard 3, respectively. Bayer is also using the Vip3a protein in 2017 in its TwinLink Plus cotton varieties.

Dow's Widestrike 3 varieties have been commercialized, but their availability was limited this year in his region, Reisig said. The company told DTN all new PhytoGen varieties in 2017 will have Widestrike 3 technology in them.

Bollgard 3's commercialization timeline remains uncertain. The trait is listed in the "pre-launch" stage 4 (the final stage before a commercial launch) of the company's cotton research and product pipeline: http://monsanto.info/….

For now, Reisig said he and his fellow entomologists are considering directing growers to scout in 2017 and use the egg-based treatment thresholds that were used before Bt cotton came onto the scene. These scouting thresholds are complicated by the fact that bollworm eggs are indistinguishable from tobacco budworm eggs. Other unknowns -- the significance of the location of the eggs on the plant or the trait technology of the infested plant -- add to the difficulty of making a recommendation to growers, he said.

"We really have to do some research," he said. "If we make headway this winter, we will recommend an egg-based threshold; if not, we'll have to recommend spraying on a case-by-case basis."

Insecticide resistance is another growing concern, Lorenz said. He saw increased survival of bollworms and other pests after diamide insecticide applications this year. Pyrethroid resistance has also been on the rise in soybean fields against the soybean podworm -- the same species as the cotton bollworm, Reisig added. 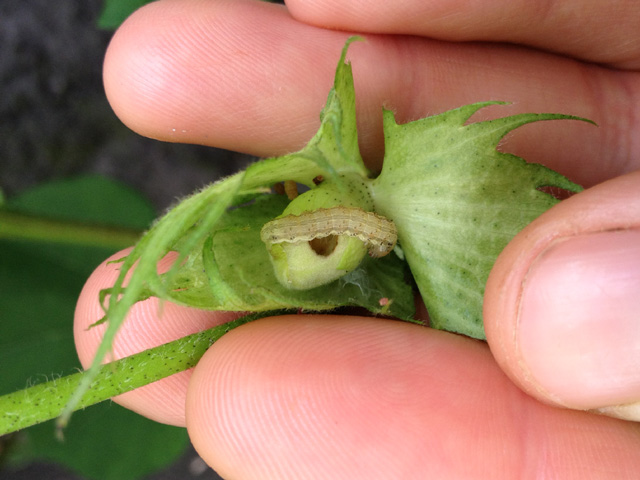