"There are some places showing up to 10% damage due to Diplodia," the AgriGold agronomist said of his tour of cornfields in northern Indiana and southwestern Michigan.

The ear rot pathogen, which thrives in warm, wet conditions, has distinguished itself among its fungal peers in the Midwest this year. Diplodia does not produce dangerous mycotoxins, but it will hurt grain quality, ding yield and complicate storage and seed selection decisions this fall, Westhoven and other agronomists are warning.

Planting date and local weather patterns will be helpful in calculating your cornfields' risk for the disease, Westhoven said. "For any ear rot infection to develop, you have to have rain within 21 days after silks emerge, so right around the July time period," he explained.

Some hybrids' genetics and plant characteristics are also more susceptible to the pathogen. Ears that remain upright late into the season with loosened husks can allow rainwater to collect in the ear after rainstorms, Westhoven said.

Insect damage also gives fungal pathogens a shortcut into the ear, though they aren't always necessary for Diplodia to develop, he noted.

Western bean cutworm feeding has been unusually severe this year in parts of the Eastern Corn Belt, such as Ohio, Indiana and Michigan. Growers using Bt hybrids with the Cry1F protein should be sure to scout their fields for cutworm-related ear rot, because the trait does not appear to be holding up under heavy insect feeding, entomologists have warned.

"Populations this year were so high that [western bean cutworms] were feeding on even traited corn," Westhoven confirmed. "We have seen a lot of ear molds in areas with a lot of insect feeding."

To check your cornfield, most agronomists recommend pulling 20 ears from five random spots across a field. Peel back the entire husk, because Diplodia starts at the base of the ear and moves up toward the tip.

Look for fluffy white mold -- Westhoven likens it to "sticky snow" -- caked in between the kernels. "If it's bad enough, the husks become really tight and it's hard to pull back leaves," he added.

Depending on how long the infection has been in the corn ear, the fungus can drop test weights and kernel size, lowering both yield and quality, Westhoven said. If calibrated correctly, the combine should send a lot of lighter, damaged kernels out the back, but some will inevitably sneak through into the harvested grain, especially in bad infestations, he added.

Diplodia-infested grain is dangerous to store, because the mold can grow and spread with enough moisture and heat. Most experts recommend selling grain from problem fields immediately, and if not, storing it separately.

A Purdue University Diplodia management guide recommends that growers dry down stored grain to below 14% moisture and cool it to 50 degrees as quickly as possible -- no small feat in the early fall months. Ultimately, infected grain is best stored at 30 degrees, so only winter storage is advisable.

Brace for discounts at the elevator. During the sampling screen, kernels with mold will be picked out and graded as damaged kernels, the Purdue guide noted. Because the disease makes kernels and cobs fragile, shelling and post-harvest handling will likely produce broken kernels and cob fragments. "Pre-cleaning, especially after drying and before delivering and storing the grain, is highly recommended" and will "help minimize discounts and improve corn storability," the guide concluded.

Diplodia easily overwinters on corn residue and infected kernels in the field. Westhoven recommends selecting hybrids with high disease resistance ratings for the fungus as your first line of defense next year.

Rotating to another crop is also one of the best ways to protect against another outbreak next year, he added. Tillage can help bury the pathogen, as well.

Examine your protection options against ear-feeding insects when selecting hybrids, especially if you farm in an area that saw high insect feeding this year. For more information on which Bt traits work on which insects, see Michigan State University's Handy Bt Trait table here: http://bit.ly/… as well as an article from MSU entomologist Chris DiFonzo on which Bt traits are working (and not working) against western bean cutworm here: http://bit.ly/….

You can find the Purdue guide to Diplodia management here: http://bit.ly/….

You can also find a detailed discussion of the disease from DuPont Pioneer here: http://bit.ly/…. 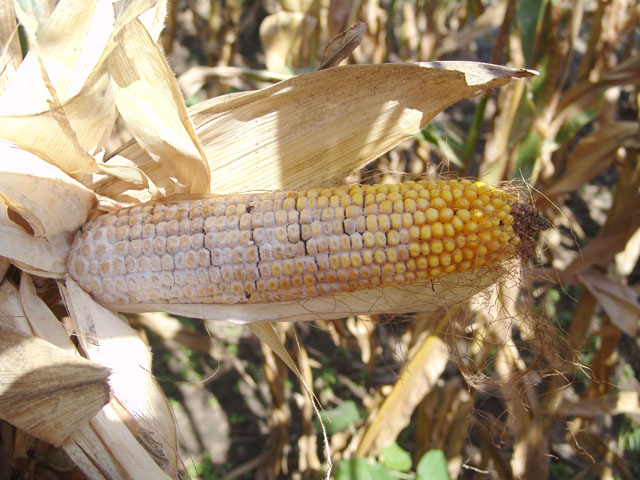