The good news for the week was the reopening of the St. Louis Harbor to barge traffic, but it could close again as flooding continues with more rain expected to add to the misery there all the way down to New Orleans.

The St. Louis Harbor reopened to barge traffic on May 16, but the latest predictions are that it could rise again and reach 38 feet on May 25-26. If that happens, the harbor would close from mile 179-184 with long-term projections saying it could last until June 5-9, according to American Commercial Barge Line (ACBL). Relentless rains in the Midwest and Delta region are creating havoc on the already swollen Mississippi River. Mississippi River forecasts are based on rainfall that has occurred and that which is forecast to occur over the next 48 hours, according to the National Weather Service.

On the Upper Mississippi River, all closed locks and two bridges have been reopened. But long-term projections are showing the Champ Clark Bridge at Louisiana, Missouri, possibly closing again on May 20 as a result of the upcoming rain event and remaining closed until June 8-13, according to ACBL. Locks 16, 17, and 20 are also predicted to close again around May 20, and are expected to remain closed until June 6-8 if more flooding occurs.

Farther north in St. Paul, Minnesota, they are hoping for more barges to show up now that the locks are open. The first tow of the season, pushing 12 barges, arrived on April 24. The lock closures south of the St. Paul District have prevented any other tows from reaching St. Paul. That has been evident in weekly barge rates published by USDA in that there are no freight rates quoted for this portion of the river as of May 14. There have also been incidents of shoaling in the St. Paul District as water levels receded. Shoaling is a result of the flooding depositing silt, creating sandy elevations in channels, which could cause grounding of vessels unless dredged.

On the Illinois River, heavy rains have created several no-wake restrictions that will be in place until May 22, slowing transits in those areas until it is lifted. Current projections have the Hardin, Illinois, area closing again on May 24-25, with concerns of the river overtopping the levees, according to ACBL. In addition, tows coming off the Illinois River in to St. Louis are restricted to 12 barges.

The Mississippi River at Vicksburg, Mississippi, continues to be above flood stage, and on Sunday, May 19, the river was at 49.8 feet, very close to major flood stage of 50 feet. Tows are only allowed to pass through the Vicksburg Bridge (LMR Mile 435) during the daylight to avoid any accidents.

In Baton Rouge, the second opening of the Bonnet Carre Spillway became the first time the spillway was opened twice during the same flood event. After heavy rains in the Mississippi and Ohio River valleys increased river stages, the USACE opened the spillway on Feb. 27, 2019, in order to keep the volume of the Mississippi River flows at New Orleans from exceeding 1.25 million cubic feet per second (cfs). On April 11, the spillway was closed, but river stages remained high. Heavy rains across the valley prompted a second opening of the spillway May 10 and by May 16, the USACE New Orleans District reported that there were 138 bays open and holding.

While many cities along the river have come close to or have broken water level records, perhaps the biggest record to be broken will be in Baton Rouge, Louisiana. In 1927, the river stayed above flood stage in Baton Rouge for 135 days, and on May 21, it will surpass this mark and become the longest ever on record that Baton Rouge has been in flood stage. In fact, current predictions have the Mississippi River staying above flood stage of 35 feet into at least early June. As of May 19, the river there was at 43.83 feet and is expected to crest this week at 44 feet.

In its weekly Grain Transportation Report, USDA noted that, as of May 11, calendar-year-to-date grain barge tonnages through the locking portions of the Mississippi, Ohio and Arkansas rivers, were 8.8 million tons. This is 32% below the three-year average and 24% lower than last year.

"For most of 2019, above-average rainfall has caused high water conditions that have disrupted traffic. Typically, by mid-May, there is continuous barge traffic (both up and down river) on the Mississippi River between Minneapolis/St. Paul, Minnesota, and the Gulf of Mexico. This year, navigation has been blocked by the closure of several locks above St. Louis and by low bridge clearances in certain areas due to high water," said USDA.

Now, imagine what this has meant for farmers who rely on the rivers to move their soybeans and corn to market. They are already feeling the negative financial effects of the long trade war between China and the U.S. The dispute has created a loss of U.S. exports to China, causing farmers to have to store more of their grain, especially soybeans, longer than they normally do. This means that marketing opportunities have been lost and some of the stored soybeans have gone out of condition, downgrading the quality.

As the flooding continues to hamper or slow river terminals from loading barges to head down to the Gulf for export, some farmers are unable to haul grain to their river elevators. It has also stopped barges from moving to the north -- barges that would normally be bringing fertilizer to farmers for spring planting. Many farmers have said that not only is this causing a rise in fertilizer prices, but many suppliers who can't get more product are rationing supplies.

It's been a rough year so far for all ag-related businesses, and it isn't over yet, according to the current river forecasts.

Here is a link to the NWS north-central river forecast: https://www.weather.gov/…

Here is a link to the NWS Lower Mississippi River forecast: https://www.weather.gov/… 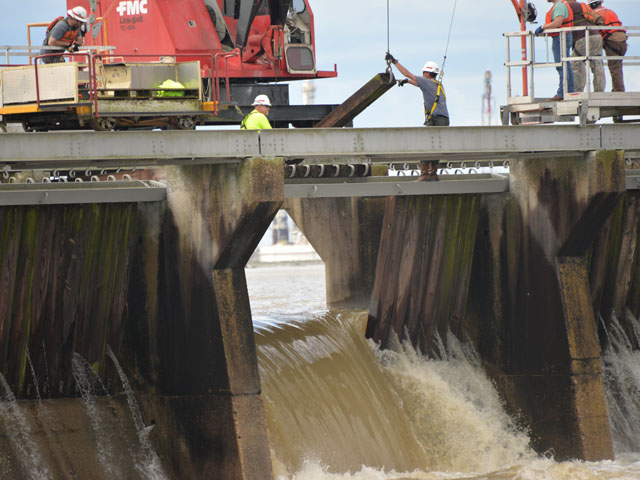