From November 2016 to January 2017, North Dakota had received 47 inches of snow, and South Dakota railcars and locomotives were buried in snow. But in last week's USDA Crop Progress report, those same areas are now suffering through drought conditions.

In a Jan. 23, 2017, story I wrote titled "Mother Nature Unkind to Grain Shippers, End Users, Exporters," I noted that the North Central Research Extension Center just south of Minot, North Dakota, reported a total of 47 inches of snow in four snowfalls since November 2016. In Mobridge, South Dakota, BNSF locomotives and railcars were buried in snow.

On April 24, 2017, I wrote a story titled "Spring Wheat Planting Off to Slow Start in Key States." In this story, I noted that as of April 16, in the northern part of the state where large amounts of snow were received this past winter, muddy soils still existed, and some isolated areas in northeast North Dakota were still experiencing some flooding. Six inches of snow fell in the same area as of April 23, and more was expected. Also, most of the western half of the state, including Jamestown and north, was under a winter weather advisory as of April 24. An elevator manager in the central part of the state just north of U.S. Highway 2 told me that, at that time, planting was off to a late start, because there was still snowbanks present in the sheltered areas.

At that time, I would never have expected that, seven weeks later, I would be writing a drought story about some of those same areas. On June 8, the U.S. Drought Monitor showed that close to 87% of North Dakota and 79% of South Dakota was in a drought as of June 6, with conditions having expanded and deteriorated compared to last week's report. The worst of the conditions are in a swath of central North Dakota that spreads into south-central North Dakota and into the north-central area of South Dakota.

"The drought is here and crops are showing the stress," said Tim Luken Manager Oahe Grain, Onida, South Dakota. "Many winter wheat acres have been zeroed out by insurance companies and many fields have been sprayed out. Producers with livestock are cutting winter wheat and baling it up for feed. Last year's seeding of winter wheat in our area was down 15% to 20%, and I would be safe to say 50% to 60% of the crop has been either sprayed out or put up for feed. Traveling from Gettysburg daily, I am starting to see some of the winter wheat in Potter County going backwards also."

Luken told me that "spring wheat is jointed, and south of here is heading out, and by next week will be heading out here in Onida and north. What is seen there is not much for tillers and you can row it, which is not good. Spring wheat has really seen the effects of the drought and each passing day is looking worse all the time. It's still green, but if we don't get any rain soon, this crop will be gone also. Each time they talk rain, it builds up and just falls apart and we end up with nothing."

"We should have no worries about any railroad issues or storage problems this year," added Luken.

"Wheat in western South Dakota has taken a dramatic downturn in the last three weeks," said Jerry Cope, a grain marketer for Dakota Mill and Grain, Inc. in Rapid City, South Dakota. "The top four" is powder dry, but subsoil isn't too bad, and some customers with stripper-head stubble are encountering scattered wet spots planting milo and sunflowers. That said, soil moisture depletion is increasing day by day. Areas in the center of the state appear the worst. Two early May frosts have held grass and hay development down. Hay demand has become a home for failing wheat. We are hearing reports of wheat hay selling either by the ton or standing in the field that equates to $120 to $150 per acre returns."

"This weekend's weather could ruin 60% or more of the spring wheat. Farmers with high-protein winter or spring wheat and needing cash are taking advantage of the recent rally in futures and basis. Farmers with high-test-weight, low-protein wheat in the bin are looking to hold, because the heat brings real concerns for test weight but hopefully higher protein. USDA probably has it about right for acres and expected production," he added.

An elevator manager from near Aberdeen, South Dakota, told me that spring wheat in Brown County, South Dakota, will get "disced up" if we don't see rain by the weekend, because temperatures in Aberdeen are expected to be 105 degrees with 20-mile-per-hour winds on Saturday. Farmers are very concerned about the condition of the crop. He told me there has been some really spotty rain over the past 10 days, but "this is the epicenter of the drought monitor. I think we've had 0.5 inch of rain in calendar year 2017 here at the elevator."

North of there, over the border in North Dakota, Mark Rohrich who farms in Ashley, North Dakota, told me that, "Some spring wheat is smaller and still holding kind of tough, and the earliest-planted wheat is being pushed into heading and is drying from the bottom up. We are facing a couple days of 90s ahead and no rain. I'm afraid that a lot of the wheat will not even make much hay if released."

"We had good subsoil moisture to start and small corn and soybeans seem to be hanging on," added Rohrich. "Anything seeded in the last two to three weeks without any rain has some emergence issues or soybeans laying dry. Sunflowers are just emerging, but dried furrows from the heat and lack of moisture for pre-emerge chemicals will be the challenge. Farther to the west, like to Herreid, South Dakota, and west to the river, I have seen even worse crops than here. Grass looks like late September, and I'm not sure what cattle are really going to eat out there. Hay will be in short supply and alfalfa looks rough. Some may not even get a first cutting."

Keith Brandt, general manager of Plains, Grain and Agronomy in Enderlin, North Dakota, told me that the dry conditions aren't real serious in eastern North Dakota. "There has been some rain, and we have good subsoil moisture. Enderlin had an inch of rain Tuesday night. Probably only three to four miles wide and maybe 20 miles long. We had very good planting conditions this spring. High winds have damaged some corn and beans with soil drifting. If the winds stop for a few days we are OK. Crops look good to this point."

Farmers in other parts of North Dakota sent me comments on the drought situation where they farm.

From Binford, North Dakota: "Pasture and hay crop isn't going to be much this year. Subsoil moisture still OK but a nice inch of rain would really help now that we've got some heat."

From Buchanan, North Dakota: "Not bad here, but getting closer."

From Portland, North Dakota: "We could use a shot of rain."

From Hope, North Dakota: "Ground moisture is very good around here could use rain to wash in chemical and cure up a couple small seeding mistakes."

Tim Dufault, who farms in the Crookston, Minnesota, area said, "I am on the eastern fringe of the drought area. We could use a drink, but it's not dire. The crops are small, so they aren't removing moisture like they will a month from now. But the hot weather that moved in a week ago is worrisome. We have had 80s and 90s with more predicted in the 10-day forecast. That could be trouble if we don't get rain to go with it. The dry spring has caused uneven emergence in soybeans and dry beans. Stands look tough."

"April planted spring wheat is holding on; however, anything planted in May missed out on most of the soil moisture," said Todd LaPlant, elevator manager at EGT, LLC Glasgow, Montana. "Emergence is very spotty and many farmers say if we do not see any rain by the weekend, a majority of the crop will be lost. With temps in the upper 80s the rest of the week, my thought is we have until the 15th before it's done; everything is riding in the six- to seven-day outlook. If we miss it, we may see a complete disaster in a five-county region of northeast Montana."

In early February 2008, the drought assessment from the University of Nebraska-Lincoln National Drought Mitigation Center (NDMC) showed that 100% of the state of North Dakota was experiencing at least abnormally dry conditions, with moderate drought present in 55% of the state and the worst drought conditions in the southwestern corner and northern third of the state. According to North Dakota State University's Soil Science Department at the time, "the average precipitation in southwestern North Dakota for the 90-day period ending Feb. 7, 2008, was only 24% of normal, making that the worst 90-day period in the state's history, and long-term precipitation models looked unfavorable.

The Minneapolis HRS wheat futures price reacted to this news, rising every trading day, pushing the cash price higher with it. In response to the volatile wheat markets, on Feb. 8, 2008, all three exchanges raised the daily trading limit in wheat futures to 60 cents per bushel from 30 cents. The limit then rose to 90 cents on the next business day and another 50% on each subsequent day when two or more contracts in the same crop year closed limit up. By Feb. 15, the trading limit for the Minneapolis March and May wheat contacts had risen to $1.35 per bushel. The Minneapolis Grain Exchange removed the price limit on its spot March 2008 contract, starting Feb. 25, 2008.

On Feb. 25, 2008, with no limit in place, the Minneapolis March futures rallied from its prior day close of $19.25 to $25 before settling at $24. By July 29, 2008, the U.S. Drought monitor showed the entire state of North Dakota still in a drought, with nearly half of the state in the western portion classified as extreme to exceptional.

So, will we see prices reach levels seen in 2008? Going forward, any rain that hits the drought areas will push the futures lower, of course, but we still have a few months of growing season left for the already struggling spring wheat crop. DTN/The Progressive Farmer Senior Ag Meteorologist Bryce Anderson said on Monday that, "Forecast precipitation through late July has an average of 4 to 6 inches for the Northern Plains -- so that is not a real dry trend." My thoughts are that we will likely see a volatile market all the way through harvest. 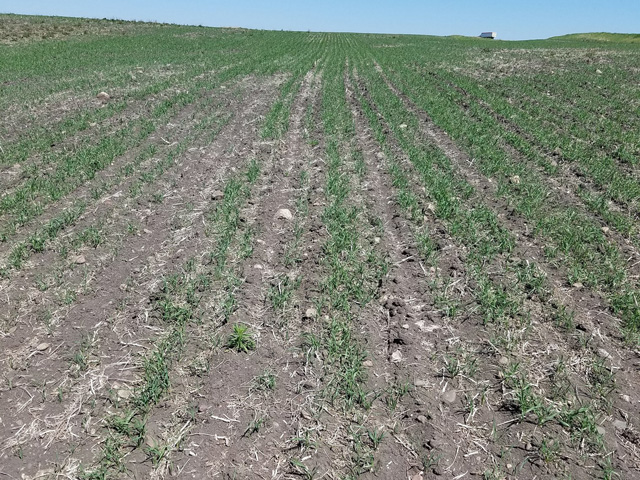