As the winter wheat harvest moves north through South Dakota and into North Dakota and Montana, millers hope those states will harvest higher-protein wheat than what was harvested in Southern Plains states this year.

U.S. Wheat Associates reported Friday that as of July 14, "The average protein of 11.2%, down a full percent from last year, did not change this week and continues to be the major topic of discussion of producers and within the trade. The relatively low-protein values are a result of the exceptional yields in the 2016 crop, much higher yields than growers could have anticipated when applying fertilizer." Samples tested were from Texas, Oklahoma and Kansas.

Tim Luken, manager at Oahe Grain in Onida, South Dakota, told me harvest in his area as of July 13 was 50% to 60% finished. He told me that protein levels have been running between 11.2% up to 11.8%. "If the industry is going to think South Dakota is going to have protein to save the day, I really don't think it's going to happen," he said. He added that over the past weekend, the protein backed off to 11.3% on the wheat he took in. He said he was still hoping to see some better protein, but likely not much 12% and higher.

Several major factors influence the protein content in wheat. The Alberta Agriculture and Rural Development staff noted in a study that those factors include the timing and amount of growing season precipitation; the temperature and heat (degree days) during the growing season; soil nitrogen reserve levels; and applied nitrogen fertilizer pre-plant, at seeding and in-crop applications.

WHAT HAPPENS BELOW 12% PROTEIN AVERAGE?

It's no secret that flour mills' flavor of choice is 12% protein when it comes to making flour. For example, while flour mills make a 13% protein flour, the most common is a mid-mix, 12% protein flour. One thing to note is that 1% of the wheat protein is lost in the flour-making process.

The higher the protein content, the harder and stronger the flour and the more it will produce crusty or chewy breads. The lower the protein, the softer the flour, which is better for cakes, cookies and pie crusts. According to a flour miller, the increased protein binds to the flour to entrap carbon dioxide released by the yeast fermentation process, resulting in a stronger rise.

Dan Maltby, a former HRW buyer in Kansas City and current consultant for Risk Management Group Minneapolis, told me that, "As far as flour/wheat protein concerns, ultimately, I believe the miller and the baker will work out a compromise that 11.5% pro HRW will make an 'acceptable product.' Big old-crop stocks, widely believed to be 12% pro will help this year's crop, widely believed to barely average 11% pro. However, negotiations are still ongoing, as witnessed by continuing drop in posted 12 pro HRW milling values."

"Of course," added Maltby, "spring wheat protein content is still a mystery. Big rains argue for lower protein content, but high temps as the head fills will offset that to a degree, although to what degree, I'm not sure. Also old-crop stocks of spring wheat do exist. The four-state region of Minnesota, North Dakota, Montana and South Dakota had 163 million bushels ON FARM as of June 1."

Informa Economics pointed out that the enormity of U.S. wheat supplies has weighed on prices, both cash and futures, for several months. "Recent data points to the Texas Triangle HRW/corn spot price ratio being the weakest it has been since the summer of 2012. The weakness in wheat cash prices, relative to corn, has induced greater-than-average wheat feeding in the Central Plains," Informa stated in recent comments.

So, if we can't bake it, we'll have to feed it, and a cheap feed it will be compared to other protein feeds. As yields continue to be near record this crop year, the supply of wheat in the U.S. can be classified as a "bin buster." The latest USDA estimate for the winter wheat yield was forecast at 53.9 bushels per acre, up 3.4 bushels from USDA's June forecast. If realized, that would be a record. The current forecast compares to the previous record at 47.8 bushels per acre in 1999. And that is just the winter wheat harvest; we still have a spring wheat crop to cut. 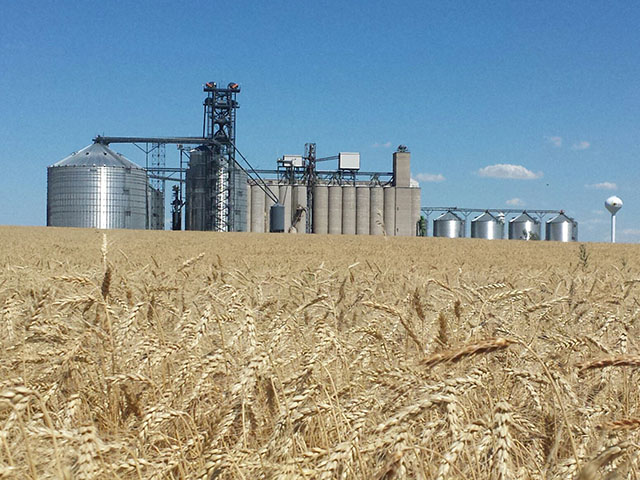