When science becomes reality and not just a theoretical exercise, it changes the future. That change is already well under way for 19-year-old Macy Alexander, who today is hyperfocused on agricultural sciences.

"I've been passionate about agriculture since I was 14," Alexander says. She didn't grow up on a farm, but, the Fayetteville teen took a class called Survey of Agriculture at Arkansas' Bentonville High School, where students were required to memorize and recite the Future Farmers of America (FFA) creed.

"I did all five paragraphs at once, and my FFA teacher recommended I go to competition with it. It was just an area FFA competition, but I won first place. I had never won first place in anything before, and I learned FFA was the place for me," she says. From that point on, Alexander pursued agriculture, emphasizing leadership and science.

Her passion for ag helped her earn a Wallace-Carver Fellowship, created through a partnership between USDA and the World Food Prize foundation. The paid fellowship provides the recipient the opportunity to work with scientists and policymakers at USDA.

In 2017, 29 fellows were stationed across the country. Following are the stories of seven of the recipients.

Macy Alexander spent the summer working with the Agricultural Research Services' (ARS) Poultry Production and Product Safety Research Unit, in Fayetteville, Arkansas. It was that step that took science from being a page in a book to a concrete path for change.

"I studied and analyzed the effects of poultry production on soil and water—and, in turn, how it affects other parts of agriculture. If you don't have good soil, you can't grow anything," she says. She also worked in poultry processing.

On the cattle side, Alexander studied both the animals and forages.

"We GPS-mapped the cattle and soil-mapped a field. The cattle liked to be in areas where the soil moisture wasn't as high," she notes. She also studied native and orchardgrass in the pasture.

"I learned lab techniques and how the scientific process works," Alexander explains. "Before, I always thought scientific experiments were theoretical. When I was immersed in it, the science was very real."

Today, she's a University of Arkansas freshman, majoring in ag education—but with what she describes as a passion in the area of sustainable agriculture. Alexander also works full-time at the ARS lab where she did her fellowship. She credits the Wallace-Carver Fellowship as the turning point in her life.

"It changed how I look at agriculture and how we will solve world hunger in the future," she says.

For Josie Consier, choosing a career in agriculture was like coming home.

Consier says the time she spent on her grandparent's Century Farm in Iowa led to a love of 4-H and farming. Today, the 19-year-old, from Ogden, is a sophomore at the University of Wisconsin-Platteville, majoring in agribusiness with a minor in crops and soils. She wants to work for a farm co-op or seed corn company.

Consier couldn't have landed in a more perfect spot as part of her Wallace-Carver Fellowship than the ARS Corn Insects and Crop Genetics Research Unit, in Ames, Iowa. Josie spent most of her time in the lab analyzing corn samples for fatty acid content.

"We were looking for higher percentages of oleic acid. It is heart-healthy," she says. "Then, we can use the corn for more than ethanol and cut down on waste."

It was a painstaking task. "I started with 223 samples, and, of those, only eight were above the percentage of oleic acid needed. I retested those eight, and six met the [final] requirements."

Those six samples will undergo genomic testing to give scientists a start on breeding a corn hybrid that will produce heart-healthy oil.

"It was extremely helpful," she reports. "I was so excited to work with USDA. I learned how to be more professional and about the breeding processes of corn and other plants."

San Diego's Nishanth Krishnan did not take a traditional path to agriculture. For him, the connection was made on the side of sustainability and food security.

"Conservation issues were big in our high school," the Californian says. "We were interested in how to sustainably grow food and cut down on food waste."

The 18-year-old was in the Feeding America San Diego club, at Torrey Pines High School, and volunteered at the area's Feeding America warehouse. He also participated in a World Food Prize program to help cut down food waste.

Those interests helped make him a perfect candidate for the World Food Prize International Internship, where he researched rice production in Beijing, China.

"I thought the Wallace-Carver Fellowship would be a capstone," explains Krishnan, now a Yale University freshman.

With a summer fellowship at the U.S. National Poultry Research Center, in Athens, Georgia, he participated in research to find a vaccine for salmonella in broilers.

"We were trying to use the chicken's own proteins in the vaccine," he says. "I actually purified two proteins that might work."

Research on the vaccine is ongoing, and Krishnan is now a volunteer at Yale University's farm. While he is undecided on a major, he is considering biology or food science, adding his time as a Wallace-Carver fellow will definitely play a positive role in his future.

For Jordan Lehman, agriculture is a family business. Growing up on a fifth-generation farm in Polk City, Iowa, the 19-year-old describes the operation as a mix of conventional and organic production that includes alfalfa hay and horses.

Now a junior at Earlham College, in Richmond, Indiana, Lehman has been active in the area of food security since attending North Polk High School and participating in the World Food Prize Iowa Youth Institute and the Global Youth Institute. She won eligibility for the programs by writing a paper on how climate change is likely to affect food security in Bangladesh.

This past summer, she saw a completely different side of food production when she conducted research at the ARS Aquatic Animal Health Research Unit, in Auburn, Alabama.

"I did a lot of different types of work, but we mainly focused on bacterial pathogens in the catfish industry," she says.

While Lehman admits she didn't have much knowledge of aquatics when she started, the experience made an impression.

"I learned an unbelievable amount about the problems facing the catfish industry, as well as what it takes to be a catfish farmer. I spent time talking to catfish farmers, primarily about what diseases have been affecting their fish," she says.

Along with the knowledge, the microbiology major says the experience helped her greatly in her field of study.

"I learned a bunch of new lab techniques I can use in microbiology," she explains. "I also gained a lot of knowledge about what it takes to work in a lab."

4-H, FFA and years spent growing up on a farm played a big part in Caleb Mathias's interest in agriculture, but the turning point for the Ohio native was on a bigger scale.

"I was a delegate for the Global Youth Institute. That was the big thing that inspired me to do plant pathology," says the Ohio State University (OSU) senior, who is now 22. Today, he has that plant pathology major in addition to a minor in agronomy.

Mathias's experiences are diverse. And, they all have inspired his love of agriculture. There was the year he grew soybeans for his FFA Supervised Agricultural Experiences, and the time he spent helping with the family's quarter horses. Once at college, participating in OSU's Plant Health and Resource Management (PHARM) Club was another step toward a career in plant pathology.

But, Mathias says the Wallace-Carver Fellowship stands out when he looks back. He spent his fellowship at the ARS National Center for Agricultural Utilization Research, in Peoria, Illinois.

"I worked with biochar, or charcoal, created from seed. We researched how it removes three commonly used pesticides from drinking water," he explains.

Those organophosphates -- malathion, diazinon and parathion -- are familiar to almost anyone involved in agriculture, even if they just grow a garden.

"We completed the majority of the study and got solid results," he reports. "I also helped write a paper. Similar studies have yielded positive results, and this looks like a good option."

Isabella Smith is a native of New York who did not grow up on a farm. But, she's probably seen as many ag operations as any Midwesterner.

"My Dad is a welder, and I went with him when he fixed things on farms," says the 17-year-old from Van Etten. Those work trips grew her interest in agriculture to the point she added an ag program and FFA to her 11th-grade curriculum at Spencer-Van Etten High School. "I got a late start," she says of agriculture, "but I went at it full on."

Through FFA, Smith competed in career-development events like public speaking and job interviews, and also participated in veterinary science, horse judging and meat judging. She was named a New York state delegate to the Global Youth Institute and, soon thereafter, applied for the fellowship.

"I knew I wanted a career in agriculture, and I decided to seize the day," she says.

The fellowship landed her at the ARS National Animal Disease Center, in Ames, Iowa, researching Streptococcus suis, a swine pathogen. Although rare, humans can get it from contact with swine or by handling pork products. The human form can be deadly and can cause sepsis, meningitis or infection of the heart valves.

"Some of those strains can stay in the host animal and have virtually no effect," she explains. "Others can kill the animal in hours. It is important to see which strains do what."

Now a freshman at the Rochester Institute of Technology, Smith's major is mechanical engineering technology. She says the skills she developed during her Wallace-Carver Fellowship are invaluable.

"I hated Nebraska and said I'd never do anything in agriculture," Rhiannon Cobb recalls.

So, where is the 19-year-old Omaha native today? Would you believe in her second year at the University of Nebraska, where one of her three minors is international agriculture and natural resources? The overachiever is also minoring in French economics and African studies, with a double major in political science and global studies.

Cobb credits her stint as a Nebraska delegate for the World Food Prize State Youth Institute for her conversion to being a fan of agriculture -- especially the foreign trade side. It all started with a paper she was required to write as a youth delegate. Cobb's was on Madagascar and trade policy.

"Their debt has doubled, and they import much more than they export," she says. She discovered only 5% of their land is in agriculture, and, as a result, they are destroying their rain forest at a rapid clip.

Today, Cobb can't contain her excitement about having landed in the Foreign Agricultural Service, in Washington D.C., for her fellowship time.

"My big project was working on the North American Free Trade Agreement (NAFTA) negotiations. I worked on the wine laws. That was really cool," she says.

She helped gather statistics and sat in on talks with the European Union, something few see -- the inner workings of the Foreign Agricultural Service.

"I talked to the people making the policies and got to see it happen in real life," she says.

As far as the experience changing her outlook, Cobb says, "Holy cow, yes. I've gone from wanting to be in Congress or president of the United States, to wanting to be a foreign service officer or work for the United Nations in international development. I have a deeper understanding on the international trade system now. The overall experience was the best thing I've ever done." 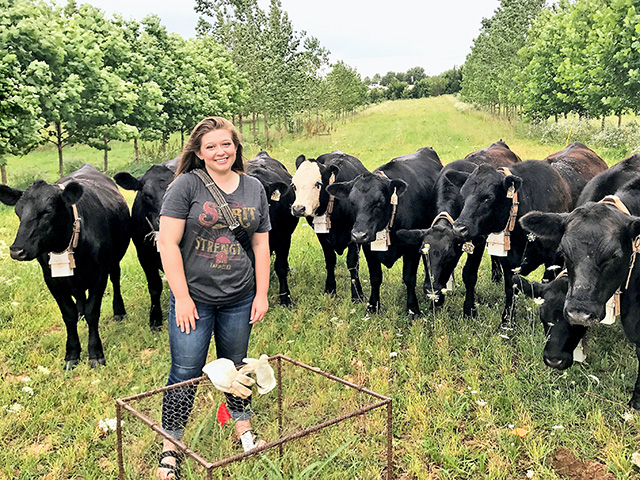