Lower summer flow from the Mississippi River this year is credited as the main driver for a smaller Gulf of Mexico hypoxia zone or "dead zone" that can kill fish and marine life.

Agriculture is always a focus of the dead zone because of nutrient runoff from more than 30 states feeds into the Mississippi River. States now spend tens of millions of dollars every year on nutrient management strategies to reduce agricultural runoff into tributary streams and rivers.

After taking measurements last week, the dead zone was measured at about 3,275 square miles, one of the smaller areas mapped since they began tracking the size of the hypoxia area. Still, that translates into more than 2 million acres of the Gulf that is potentially uninhabitable for fish and other marine wildlife. The hypoxia area peaked in 2017 at 8,776 square miles.

"The size of the low-oxygen area is what I would call unusual," said Nancy Rabalais, a professor at Louisiana State University and the principal investigator of the dead zone.

The National Oceanic and Atmospheric Administration (NOAA) released details on the size of this year's dead zone on Wednesday.

The lower river flow from the Mississippi River caused dissolved oxygen from surface waters to diffuse more easily into the seabed, Rabalais said.

Despite the smaller dead zone this year, the size is twice as large as the goals of the EPA Hypoxia Task Force.

Essentially, nutrients from major cities, farms and other sources drain into the Gulf of Mexico and stimulate algal growth during the spring and summer. When the algae die, they sink and decompose. That process causes oxygen-consuming bacteria to decay the algae and consume the oxygen. The end result is areas of low oxygen levels near the bottom of the Gulf that are insufficient to sustain marine life, leaving the habitat unusable. Marine life that can will migrate to other areas while others die, NOAA stated.

"I'm excited about the programs they are putting in place to reduce nutrient loading in the Gulf," Pigott said.

Mike Naig, Iowa's secretary of Agriculture, co-chairs the EPA Hypoxia Task Force. He noted the Mississippi River has a drainage basin of 1.2 million square miles. Naig said water quality is an important issue with a lot of stakeholders. He also said, "We've got to balance commerce and water quality," citing the "hundreds of millions of dollars worth of goods that are shipped through the Port of New Orleans every year."

Naig cited the work being done in states such as Iowa, Ohio and Indiana to implement conservation projects to reduce nutrient runoff. Indiana, for instance, reported a record number of cover crops this year in the state to absorb nutrients and reduce runoff.

"And of course we know cover crops can play a key role in keeping our valuable soil in place," Naig said, adding that "We're all working to scale up and accelerate the adoption of practices."

In Iowa, Naig said his department spends $42 million a year on water quality, that is then leveraged with funds from the Iowa Department of Natural Resources and USDA. While acknowledging the investments made to reduce nutrient loads, Naig said more is needed.

"Here's the bottom line. We've got more work to do," Naig said. "It's going to take significant funding, it's going to take more technical resources, and construction capacity. And we flat-out need more cities, businesses, farmers, landowners of all kinds to say, 'Yes, I'm ready to do more to protect our soil and water' and we have to start to respect that fact -- and you've already heard a couple of times -- but we know our technology evolves, our knowledge evolves and we've got to continuously be innovating and learning and testing and driving new science-based practices, new partnerships and new ways to finance all of this to allow us to have an even greater impact on our shared resource." 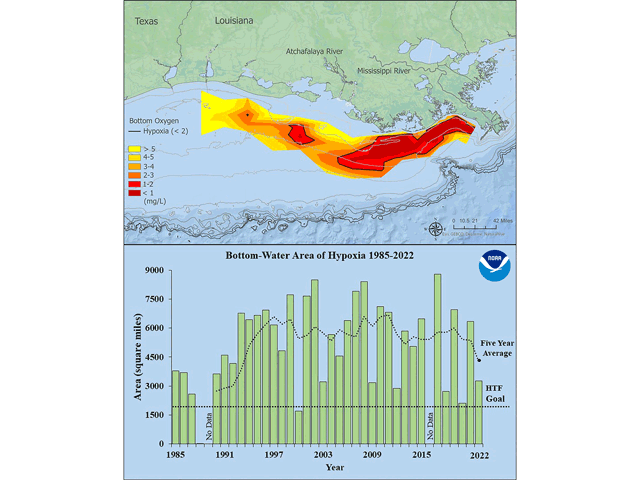