DECATUR, Ill. (DTN) -- A unharvested field is like a gift waiting to be opened. Beyond those end row wrappings might be the yields wished for all season or a disappointing let-down. Still, Colorado farmer Marc Arnusch will tell you no matter the outcome, the thrill of seeing the year's work revealed never ceases to fascinate him.

The resiliency of grain sorghum (milo) was the gift he received in this drought prone year. Arnusch Farms harvested their first milo crop ever this past week. And while yields were off slightly less than expectations, they were strong enough to earn the crop a more permanent place in the rotation.

Ohio farmer Luke Garrabrant is pretty sure he could do without the lower end of the yield surprises, but the young farmer admitted that he is drawn to watching the combine yield monitor. "In those pockets of the corn field when yields start nudging 300 (bushel per acre), I see the potential and feel the urge to figure out how to make the rest of the field do that more consistently," said Garrabrant.

This season Garrabrant and Arnusch have been recording their thoughts as the season progresses through DTN's View From the Cab series. Each week the two volunteers report in on crop progress and tackle farm and rural topics.

This week harvest is beginning to wind to a close for 2022. But the work never really ends as what is learned from this year is already being applied to plans for 2023.

Read on to learn more about what Arnusch has learned from some first-year trials in the milo field; what is causing Garrabrant to consider upgrading his bean head for next harvest and how the 2022 crop year will be recorded in their memories.

Combines can be finicky and Garrabrant has spent more than his fair share of time fixing this fall. He was able to finish the soybean harvest but was installing a new hydraulic pump in the machine before heading back to the corn field.

The pump, a pully and the two new bearings necessary for the repair amounted to a $2,000 investment. His ability to do many of the needed repairs on his equipment has become a necessity, both in terms of time and cost savings. "I can't do big things like a motor tear down and rebuild, but repairs like replacing bearings or hanging a new pump are fairly simple.

"At the very least, I try to diagnose a problem before calling a service tech to try to save expenses," he said.

Diagnosing what happened in his soybean field this year is also top of mind. Persistent rains delayed soybean planting well into June for Garrabrant and his latest planted fields ended up being short of stature.

"They were heavily podded from top to bottom. Yields could have been better, but considering when they were planted, they could have been worse but we had the rains we needed," he noted. "The problem I had this year was getting them to pull into the combine head to get a good clean cut."

A draper head might have helped and that's under consideration as an investment for next year. However, Garrabrant also plans to investigate whether an airbar that utilizes a high-velocity air stream to thrust pods and plant material across the cutting head and into the feeder-house might be better at helping reduce harvest losses.

"I don't think we're going to look back on 2022 and remember that it separated itself out on yield," Garrabrant said. "Maybe the fact that we planted late and still came away with respectable yields is worth noting. But it's more likely that it will be remembered for both the crop prices received and the prices paid for inputs."

Harvest becomes an odd combination of emotions that run from an overwhelming desire to be done to a near depression that it is over, the young farmer admitted.

"It's like you are running on a treadmill and all of a sudden the treadmill stops," Garrabrant said. "It's not like there's not still a lot of fall work to do, but there's something about harvest that leaves you a little empty after it is over."

For now, though Garrabrant still has plenty of yield monitor watching to do as only 25% of his corn harvest was complete as of Oct. 27. He noted that one thing that is clear as he watches those bushels blip across the screen is the yield price he pays in fields bordered by tree lines.

"Many of our fields average 10 to 15 acres in size and approximately 80% of those fields are bordered by trees on at least two sides. We see a significant yield hit about 100 feet into the field where the crop competes with trees for resources," he said. Judiciously clearing some of those borders would help yield averages, but Garrabrant is also sensitive to the need to maintain habitat and be conservation minded. Clearing land is also not always an option on rental acres.

This year has also been a learning curve when it comes to affording and maintaining farm labor. His local community is bustling with economic development and the competition for labor is stiff.

As a defensive move in 2023, Garrabrant is streamlining operations and shifting away from more labor-intensive wheat and hay enterprises to concentrate on corn and soybean production.

Even though there may be a lull in intensity of the farm operations following harvest, the work never ends. "Equipment cleaning, maintenance, field tile repairs, tile installation ... These things may not be our bread and butter, but it's what keeps the machine going," he said.

"One thing I've learned in becoming an independent operator is that farming can't always be about the things you like to do. Often it is those things you don't like to do that keep you afloat and keep things going," he said.

The 2023 harvest wrapped up for Arnusch Farms just in time to be topped off by a freezing drizzle.

The chilly conditions weren't about to curb Arnusch's enthusiasm for his first milo crop though. The farm's 106 acres of irrigated milo yielded slightly less than the 150-bpa crop yield goal set this spring.

"But gosh, prices have rebounded. We're looking a $7.40 cash milo and that's still a fantastic return considering how little we've invested in the crop. It's 25% the input cost of corn and that savings is not just in water and fertilizer, but seed, herbicides and fungicide, as well," he said.

Arnusch expects pest pressures to change with time. Sugarcane aphid hasn't gotten the memo that the crop is in his part of Colorado ... yet. "That's easily our biggest threat moving forward, but we are watching very closely," he said.

He expects milo to have a larger place in the farm's future. That could change based on water availability, but the crop fits rotations and matches existing equipment. The marketplace is strong and it is a risk-limiting crop. "If a hailstorm comes mid-summer and wipes us out, we aren't looking at an $800,000 to $900,000 investment in that crop. It really helps us hedge our bets," he said.

Arnusch said he had enough variables growing a new crop that it was decided to haul it to town. The crop was hedged on the board, so he expected to make a cash sale, own it on paper and let the elevator, which is only four miles down the road, shoulder the storage.

The main drawback he's found to the crop is managing weed pressure. Russian thistle and some grasses, such as barnyard grass and foxtail, managed to escape in milo fields under their current chemistry program. Arnusch is considering adopting some of the new seed varieties that contain non-GMO herbicide trait technologies next year.

"There are a few constraints with milo where we have a lot of cereal grains in our rotations, but overall, it just really fits well in our water limited environment," he said. And for those who complain about milo being itchy and dusty, he challenges them to compare it against malt barley.

Ultimately, he admitted the challenge and excitement of trying something new has been a lure too. The entire farm staff has gotten engaged in the opportunity to test, modify and innovate the new crop.

"We understand the cause-and-effect relationship of managing wheat, barley and corn in terms of using of hormones and seed applied technologies, for example. But we are not there yet in terms of a knowledge base with milo," he said.

This year they conducted on-farm row spacing trial in milo comparing 7.5-inch rows to 30-inch rows. "The yield monitor showed as much as a 30-bushel yield difference with 30-inch rows easily being the winner," he said. Arnusch believes the ability to singulate seeding in the wider row compared to the controlled spill of the air seeder was a factor. He wondered if there were advantages to having less competition and more air flow in the wider row.

"I think our population was too high. We were shooting for 58,000 plants per acre (ppa) on irrigated and I'm thinking we might need to reduce that down toward 32,000 to 35,000 ppa," he said. He wants to try some in-furrow fertility research next year and maybe some fungicide trials.

The view from the combine seat of that first crop rolling can't be replicated in the grain cart or semi, Arnusch said.

"That euphoria of opening a field happens for me every farm, every field. But this crop was particularly meaningful. We had as tough of a spring as I've been through in a very long time -- maybe ever. And to still grow a crop that yielded over 100 bushel per acre is a success. That's a win. Most importantly, it was a profitable enterprise," he said.

This spring things looked dire for the farm. There was severe drought, and on top of it came 21 consecutive days of wind and blowing dirt.

"We were losing crops and the wheat was the worst we've ever had it look in April and May," Arnusch said. "But things change, and they always will. When I look back on 2022, we certainly aren't going to break any records for yield on our farm, but we are going to make money and we're going to be successful, and the crop we did raise was good."

There were also lessons learned. His young farm staff is getting their first taste of inflation and the need to be resilient and patient. What falls on the shoulders of leadership when times are less than enthusiastic is a responsibility to teach that out of adversity almost always comes an opportunity, he said.

"As hard as it is, sometimes we must hit some walls to learn how to get over them. The thing I really love about farming is that every day is different," he said. "But with that comes challenges!" 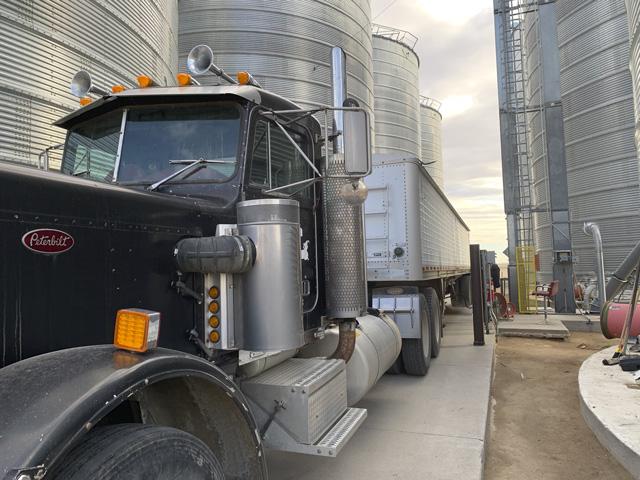