Colorado farmer Marc Arnusch is on the other side of that weather wish. He's hoping for a hard freeze to knock some moisture out of milo and slow down winter wheat growth.

To say that weather has been a focus for these two farmers in 2022 is an understatement. Arnusch started out the season bone dry and only began what appears to be a slight recovery this fall. Rain delays that pushed planting well into June has made harvest something of a slog as Garrabrant waits for crops to dry down.

The farmers are participating in DTN's View From the Cab series, a weekly in-season assessment of crop progress in their regions. The features also look at rural issues and farm life.

This 26th installment takes readers to the field as the farmers bring in the last of their crops and prepare fields for 2023. Those harvest long days can take a toll on physical and mental health and while the prospect of a winter break might seem nice, those days can stretch out when machine operations finally come to a seasonal end. This week the farmers discuss what they do and who they turn to when pressures mount.

How do you spell relief from a long farming year? This week it revolves around the word pheasants for Arnusch.

He and son, Brett, are taking a short break to see if they can flush out some birds in South Dakota. "We've already seen more pheasants on the side of the road driving up here than I've seen in my lifetime in Colorado. So, I think we are in the right place," said Arnusch.

Admitting that he's not much of a shot, the trip isn't as much about hunting for the two as it is mental therapy. Other farmers joining the hunt provide both networking and old-fashioned comradery.

The only thing that made them second guess the short escape was a call from the home farm team saying others in the area were starting to nose into the milo crop. "I think it is still a little too high in moisture for what we are comfortable with, and that we are still a week out," Arnusch said.

Variable moisture in the field has had him hoping for a killing frost to even the crop out before the combine rolls. Besides, he wants to be there to experience what he believes will be a good, first crop of milo for the farm.

He may get his wish, said DTN Ag Meteorologist John Baranick. DTN's forecast is for Oct. 25-27 to hit low temperatures reaching 30-32 degrees Fahrenheit, but falling down into the upper 20s after that.

Back at home winter herbicide burndowns to take out some noxious weeds are on the work schedule on farms that they've rented for the first time. Field bindweed doesn't take vacations.

And, in this drought year, the farm was celebrating a win in the Colorado portion of the National Wheat Yield Contest. This year Casey Cantwell and his wife, Taylorann, who are part of the Arnusch Farms team, struck out on their own with some acreage and brought home first place state honors with 134.69 bushel per acre in the Irrigated Winter Wheat category with Limagrain Cereals LCS Helix AX.

Arnusch who has been loving seeing the young couple start their first farming ventures was prouder than if the entry had come from the main farm. Despite the dry season, Arnusch attributes the success of this plot on good stand establishment.

"They made all the right moves at the right time to grow a really good crop, despite the weather challenges," Arnusch said. "They planted early and had access to ample water supply and made the adjustments needed during the growing season. Mostly they listened to advice and really tended that crop."

In 2019, Arnusch Farms came one bushel away from the overall top yield in the national wheat yield contest with a 210.52 bpa entry of WestBred WB4418. "We didn't have the kind conditions to grow that kind of yield this year, but I think Casey and Taylorann had everything in place to replicate that if we had the same water and heat units. What they accomplished in the face of drought conditions is a big deal," he said.

So far, stand establishment on both dryland and irrigated winter wheat acres looks great this fall, Arnusch noted. "We're in a similar place that we were in 2019. Stands came up immediately and they are tillering heavily. We're slightly concerned that it (wheat) might get too big going into winter, but I will trade that for the dry spot we were in a year ago," he said.

Drought digs into the soul of a farmer, Arnusch said. Learning to be patient and endure is something he's come to over time with the help of mentors -- mostly other farmers and professional colleagues that he isn't afraid to reach out to and ask for an ear or an opinion.

"I've also developed strong relationships with my banker and many of our input providers. We make sure they understand that the goal of our farm is to continue to add value; to make sure that we are controlling costs and to make sure that we know what our numbers are. That puts us in a position to be successful," he added.

Arnusch isn't sure he was as successful at finding a work and family balance early in his career. "I try to take the farm home with me less and less. This is something I've had to work hard at, and it is not easy. But we must be able to unplug at some point and make sure we're not carrying this angst and concern with us to bed or to the dinner table or into family time," he said.

His wife, Jill, works in the business overseeing the farm finances. Arnusch calls her the "glue that binds the farm together."

"Having her by my side means everything. She's the person that brings balance to our decision making and occasionally talks me off the ledge when I need it," he said.

"In agriculture, we have a number of challenges, and they differ from farm to farm. But one thing is consistent -- if there's a partner or spouse, they need to be pulling in the same direction," he said. "It's true of any marriage, but particularly in farm situations where we deal with positives and negatives daily. It can lead to a lot of stress quickly if you aren't communicating."

It's been a year of decisions for Garrabrant. An opportunity to rent more crop land has led him to work at streamlining operations with an eye on efficiency and labor savings. He won't be planting winter wheat this fall. He's converting hay acres to row crops. He upgraded his sprayer. The cow herd has been thinned to a more manageable size.

By his side in all those decisions is his wife, Paige, who works full time as a water quality specialist at The Ohio State University. Add tending a toddler, renovating a house, doing graphic web design, writing the farm's quarterly newsletter and driving equipment to the many caps she wears.

"She's Wonder Woman. I don't know how she does it all," said Garrabrant.

As a young couple trying to expand in this competitive business of farming, the 26-year-old Garrabrant acknowledged the pressures of farming can be heavy without someone to share the load.

"Paige summarizes all the good in life for me and brings me back down to earth and grounds me," he said. "She helps me see the other side of situations.

"Yes, we're growing the business and there are some struggles that come with that. But we do it knowing that what we are doing makes a difference and matters. We try to keep that as our focus and keep pushing forward," he said.

Part of the uncertainty comes from the urban development going on around him. Land prices are booming as companies, such as Intel, are building in the area. It makes decision making on expanding the farm even more difficult -- not to mention logistics of moving equipment in traffic.

But Garrabrant said it is finances that often become the main stressor for young farmers like himself, who are trying to be independent self-starters.

"I totally agree that money is not everything in life. But the investment for a young farmer to operate at a profitable scale is staggering," he said. Hefty, unexpected expenses on equipment can be real challenges to a relationship if communication is not firmly in place, he noted.

"Paige's job off the farm is important for many reasons. For one thing, it secures important health benefits for us. I don't take that for granted," he said.

Soybeans dropping leaves reached 96% and 51% of the soybeans in the state were harvested.

A 3/10th inch rain accumulation had slowed harvesting slightly. This week he was custom harvesting corn as his own corn crop was still too wet. "I think what I'm harvesting this week is going to make around 200 bpa, which is about 20 bushel better than the county average.

"Overall, we're going to have a good corn crop, but we still need some heat units on some of it," he said. Garrabrant's latest planted field was still only about one-third to half milk line. Yield losses due to fall frost damage can be severe in corn still in the milk-stages of development. Most agronomists define a killing frost as air temperatures at 28 F or lower that causes complete death of whole plants. Frost damage that occurs at slightly higher temperatures will injure leaves, but not necessarily kill the whole plant.

DTN's Baranick offered some hope for the crop to continue maturation. Cloud cover drifting off the Great Lakes has helped keep the overnight lows from reaching freezing, he said.

"Lows nearby Johnstown were in the 34- to 36-degree range, but you don't have to go too far north to see 32 for the morning lows. Hitting 32 probably wouldn't be a killing frost, you've got to get down into the 20s for a few hours to do that.

"So, if there is still some corn that hasn't reached black layer, I would suspect it's still alive. It is going to be much warmer for the next couple of weeks. We do not have low temperatures below 40 in our 15-day forecast. Maybe one of those days next week, it settles out and temperatures fall a bit into the 30s, but the risk is very low to hit freezing," said Baranick.

Garrabrant will take all the warmth he can get. He's ready to quit worrying about this crop and start planning for 2023. 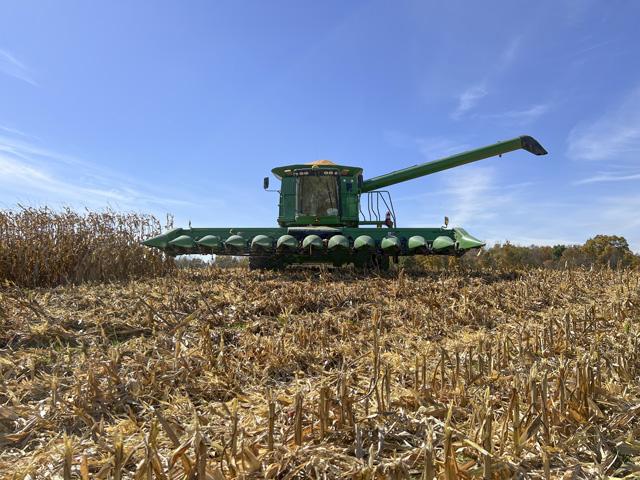