DECATUR, Ill. (DTN) -- Marc Arnusch's crystal ball on fuel prices is on the fritz. The Colorado farmer has watched red diesel prices jump dramatically over the past few weeks and it caught him off-guard.

Arnusch lives only 40 minutes from a refinery and struggled to get clear diesel for over-the-road trucks earlier in the season. However, this time the ouch comes not in supply, but in the cost of red diesel for tractors and other off-road vehicles which is now demanding nearly $5.00 per gallon compared to $3.50 per gallon it cost less than a month ago.

"In this region, we typically have this little blip in October when fuel prices dip as consumers quit driving cars and stay home and get back to school. Gosh, that absolutely didn't happen this year," Arnusch said.

While Ohio farmer Luke Garrabrant can't say he's noticed big fuel price spikes of late, he's not so sure he isn't just numb to everything these days as inflation has universally knocked the wind out of purchasing power.

"Honestly, it's hard to know what to do about buying ahead or waiting. I'm not as worried about getting products as I was last year this time, but pricing anything right now seems like a guess," he said.

Garrabrant and Arnusch are participating in DTN's View From the Cab series. The weekly feature runs through the growing season and the farmers volunteer their time and talk about crop progress and rural farm topics. This is the 25th installment of the feature.

Read on to learn how harvest is progressing and a few of their thoughts on the cost of doing business in this era of uncertainty.

Luke Garrabrant was spending a little extra time with his toddler, Gracen, this week as he waited for parts and repairs to his combine.

Just as soybean harvest was really starting to roll, a sheave that adjusts and drives the combine's rotor blew a grease seal; that coated the belt; that started the belt slipping; that made harvest come to a grinding stop. Go ahead and insert nursery rhyme timing to reading that sentence because anything to make a breakdown during harvest less painful seems prudent.

The good news is his equipment dealership responded with alacrity. "Within a couple of hours of the call they were here and had diagnosed the problem. The dealership is an hour away and this is prime season, so I couldn't complain," he said. "The problem is some of the parts weren't in stock, but they went to work hard to getting them for me overnight."

Garrabrant tries to keep breakdowns and setbacks in perspective. He figures personal rants don't help fix anything. "The trick is reading the situation to know whether you need to light a fire under someone to accomplish what needs to be done. There is a line," he admitted.

A rain came just in time to cool off any fever he was feeling about needing to be in the field, but supply chain issues are a real and concerning part of doing business today, he said.

Costs continue to climb, as well. "Three years ago, we were paying $15 to $18 per gallon for name brand Roundup (PowerMax). Now you can't touch generic glyphosate for under $30 per gallon." The cost of ordinary parts such as ball bearings, belts and even hydraulic hoses make it hard to stockpile for "just-in-case" events.

One thing farmers don't talk about much is cost of living increases for the family. Garrabrant knows he's lucky since home-raised beef goes into his freezer. But the cost of essential goods continues to ratchet upward at an alarming pace. Inflation is also beginning to influence decisions on things he once took for granted, such as the price of a fast-food take-out meal.

For now, he's trying to concentrate on simply getting the crop out of the field. The most recent USDA-NASS crop progress report pegged Ohio corn at 7% harvested versus 10% for a five-year average. Soybean harvest was 13% completed compared to 19% complete for this period of October. The harvested figures lag 2021 completion considerably. Both the corn and soybeans were rated as 64% good-to-excellent.

Those figures pretty much echo what Garrabrant is seeing in his area regarding harvest. He hasn't opened a field of corn yet, but neighbors were reporting moisture levels in the mid-20% range.

"Soybean yields are all over the place. We've seen fields at 65 bushel per acre (bpa) and as low as 40 bpa," said Garrabrant. "I wish I could tell you why. We know it is weather related, but it seems so random and almost contradictory.

"We have one soybean farm that is systematically tiled with good fertility that is making 10 bpa less than a swampy field where it is hard to even get a crop planted," he said.

Still, he knows that central Ohio has fared better than some areas of the state that received too much rain. While he isn't planting wheat this year, he's seen an extraordinary amount of wheat being planted in the area.

"What's scary to me when I look at the markets is that while prices look decent, that's about where we need corn to be at to justify what we're paying for inputs. Budgets are already tight for next year," he said.

The fourth cutting of alfalfa was dropped and swathed this week on Arnusch Farms. Custom balers were due to gather it into 4 X 4 X 8 squares bales this week.

The previous three cuttings have been chopped as haylage by a local dairy. "This is our money shot," Arnusch said of the last cutting. "The quality is good and we can demand a higher price than for green chop," he said.

"We stack the bales at our farm and move them as we sell them. There's a large dairy within 4 miles and 600,000 head of cattle in our county. Moving good alfalfa hay here is not a challenge," he said.

Although this area of southeastern Colorado has attracted a few small rain showers of late, over 75% of the county remains in D2 severe drought status according to the U.S. Drought Monitor. Weld County is at negative 2.42 inches of rainfall for the year. So far, that deficit makes this the 24th driest year (January 2022 through August 2022) of the past 148 years.

Arnusch is also one hard freeze away from starting to nose into milo acres. The farm planted the crop for the first time this year when drought rapped hard and early.

"We're seeing some variable moisture levels within the field and hoping a hard freeze will make that right," he said.

Winter wheat is also off to the races with 85% estimated as planted in the state and 46% considered emerged. Arnusch has finished his winter wheat planting and so far, emergence looks good.

Arnusch found the October Crop Production and World Agricultural Supply and Demand (WASDE) reports to be confusing. "It seems like this market is fed by every small piece of news. I thought it would gyrate violently one way the other with any little change," he said.

USDA is estimating U.S. wheat ending stocks at 576 mb, the lowest level in 15 years and above the pre-report estimate of 563 mb. More bad news out of the Kremlin relative to Ukraine didn't cause the market reactions he was expecting either. "It makes me wonder if some of this uncertainty is already baked into the marketplace," he said.

Meanwhile, news that inflation is over 8% makes him wonder if there's a delay in information in the marketplace. "Because what we're feeling what I would suggest double-digit inflation in terms of the inputs for agriculture," he said.

When it comes to those lofty fuel prices, Arnusch Farms has decided to work down existing supplies of both clear and red diesel, hoping for a better pricing opportunity come winter or spring. "We're going to be living hand-to-mouth in the short-term to get us through the rest of harvest. We just hope it flattens out a bit more so we can make a better value purchase going into next spring," Arnusch said.

He's also been busy talking to fertilizer suppliers and getting mixed messages about pricing opportunities. "There are some sharp contrasts in 32%, 28% and 10-34-0 pricing right now. I'm not sure if some suppliers are working down existing inventories or others purchased at a different price point, but it's fascinating to see the differences," he said.

During this lull between crops, Arnusch was also taking time to review insurance policies. One thing that caught him off guard was the need to upgrade cargo insurance to reflect the increased value of the grain commodities being hauled to market. 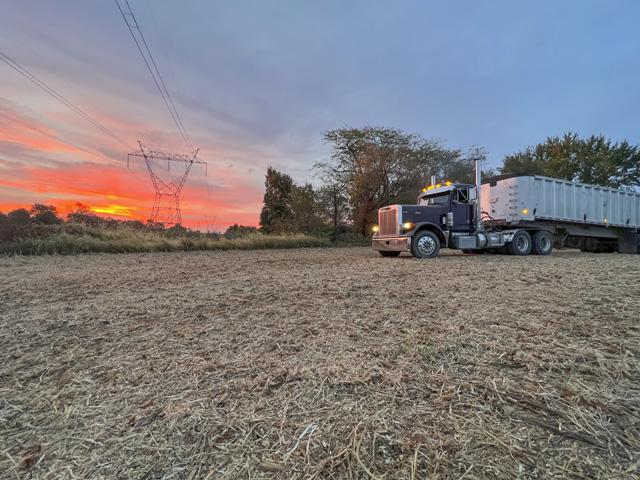