DECATUR, Ill. (DTN) -- Luke Garrabrant isn't afraid to spill the beans when it comes to the perennial auger wagon versus grain cart argument. "It's a grain cart. End of discussion," said Garrabrant.

The Ohio farmer picks his corn; cuts soybeans and uses a field cultivator, not a digger, as some farmers tend to call the tillage device.

Aaaarrgh…those localisms. Every region has expressions, idioms, cliches, colloquialisms, superstitions, and cultural differences that can sometimes make an outsider…well…scratch their head.

For example, drought has made this growing season a hard row to hoe for Colorado farmer Marc Arnusch. But when it started raining cats and dogs (briefly), he separated the wheat from the chaff and decided to head back to the field with the grain drill.

Arnusch and Garrabrant are participating in this season's DTN column known as View From the Cab. The series looks at progress of the crop throughout the growing season and all things rural.

Read on to learn more about how soybean harvest has been slow going in Ohio and why more wheat is on the menu in Colorado. And, in this 24th week, after answering a lot of tough questions, DTN asked these farmer volunteers to have a bit of fun by digging in on local vernacular.

The colorful language that occasionally spews forth around Arnusch Farms may be a tad too colorful to print, joked Marc Arnusch. Even the question of local colloquialisms and customs drew some chuckles from the millennials on his farm staff, who tend to believe Googled answers are more accurate rather than reading nature's tea leaves.

"When I say 'the flies are biting, it's going to rain' or 'there are bubbles in the puddles, it's going to rain again tomorrow,' I find our younger farm staff spends a lot of their time trying to disprove those comments," he said.

"A neighbor of ours down the road always said you knew when the soil temperatures were right to plant corn when you can go out at 7 o'clock in the morning and drop your trousers and you could stand to sit on the bare ground for 10 minutes. I suspect that's maybe around 55 degrees," he chuckled.

"In this area, we also like to say that it's colder than a well digger's behind. That comes from digging a lot of the irrigation wells in our community. The deeper you dig, the colder the ground gets," he said.

Arnusch has mostly weaned himself from being superstitious, although he does admit he went nearly a month in high school without washing his baseball socks because the team was on a winning streak.

"We walk under ladders. I have a black cat. However, we are careful never to say the 'H' word. It's kind of like Voldemort--it's the word never spoken," he said, referencing the evil Harry Potter antagonist.

"Although while we never speak of hail, we also never forget hail events," he noted.

Arnusch recalled a farm foreman that would work until the wee hours of the morning on Thursday but wouldn't start a new project on Friday.

This year, the farm will not be planting any stubble-back wheat, which is a term applied to wheat planted back into wheat residue from the summer crop. They also, use a grain cart, not an auger wagon.

"However, we are definitely auger-in versus auger-out operators," he said, referring to a common combine debate among farmers. "There are too many pivots and other obstacles in this area to keep augers extended." Also, he said the creek never rises because it is officially a "crick."

This past week, with only a slim chance in the forecast for rain, the skies miraculously opened a few hours after silage crews finished the corn harvest. Over the course of several days, a total of 1.5 inches fell--mostly coming in showers of a few tenths here and there.

That instilled enough confidence to head back to the field with the grain drill. "We'll try to match the crop to the moisture we have available. And as soon as things dry out, we have at least two more farms to seed thanks to this additional moisture."

There's a slight concern about emergence and whether the rainfall will cause soil crusting. "We planted a little deeper than normal with some of our early wheat because we were chasing some residual moisture.

"We're currently scouting our fields to see any evidence of challenges. What would hurt us is to get hot and have winds. But we're starting to see nighttime lows slip into the low 40s and upper 30s and so far things are looking good," he said.

DTN ag meteorologist John Baranick said the outlook for additional precipitation isn't great this week, although a couple of fronts may grace the area. "The silver lining is that temperature swings won't be too bad," Baranick said.

While dry conditions are something this region routinely deals with, Arnusch finds himself more optimistic than he's been in a long time. Last year's winter wheat didn't germinate until spring and a good number of the acres germinated weren't worth saving.

The moisture received so far this fall has encouraged the farm to increase winter wheat acres slightly more than 150%. "We have an opportunity through crop insurance to take some risk off the table. The guaranteed price on insured is $10.28 and I think the chances of wheat being underneath that price is greater than it is going above it," he said.

"We like what wheat does agronomically for our rotations and there's a good bet we can maintain some profitability with that kind of guarantee," he added.

The farm also looks to add further value to wheat by growing a proprietary variety that goes direct to a distillery. Those seeds going to a niche market get a slightly more protective seed treatment and are planted a tad shallower. "We'll push phosphorus and potassium either late fall or early spring.

"With the conditions we're planting into and the growth we have had, there's a chance this wheat could get a bit big on us. That's more of a concern next spring when rogue events result in killing frosts or freezes," he said.

For Arnusch, perhaps the sentiments that wrap up the 2022 season so far is "keep the faith" and "stay flexible."

"This year has been eye-opening, for myself and my young farm staff. It's turned out considerably different than it started because it looked really, really dire this spring," he said.

"My job is to keep attitudes and confidence steady. Now that we are nearing the finish line and we can see things are going to be ok, I think they are beginning to understand the need for patience in this profession," he said.

Patience may be a virtue, but Luke Garrabrant's was running low this week as the crop just doesn't seem to want to dry down. Stems and leaves weren't the problem, the soybeans are still tough.

"The weird thing is those we've harvested so far were planted the last week of April. They aren't drying down very fast either," Garrabrant said, noting that the beans were a 2.9 maturity group. He estimated that most soybeans planted in this central Ohio region around Johnstown range from 2.9 to 3.6 in maturity.

"We used to plant a lot of 3.8 to 4.0, but the weather changes and smaller harvest windows have generally shifted us to an earlier bean," he said.

DTN's ag weather meteorologist John Baranick said Garrabrant's farm will likely see a roller coaster ride of temperatures as a strong cold front was due to arrive on Friday, October 7, and bring the potential of frost. Temperatures warm back up into the lower 70s next week but are expected to fall again behind another strong cold front.

"The front may come with a few showers in it, but models are not very consistent with how it will turn out. They've got a chance to get some rain and the strong cold front could make for some moderate intensity with thunderstorms. Harvest might have to 'take a rain check' for a few days afterwards," Baranick said.

Garrabrant isn't about to let grass grow beneath his feet while he waits for harvest to heat up. He was in the sprayer this week, making fall herbicide applications in wheat stubble fields.

That was something of a treat since it was a chance to utilize the new-to-him 2020 John Deere R4038 high clearance sprayer purchased this fall. So far, he's liking the responsiveness of the unit and with several thousand acres of burndown to do this fall, is looking forward to trying out the direct inject system.

"As I was growing up, Dad was always saying that you can't make money unless you spend it. He might regret saying that now, as I seem to be pretty good at taking his advice in this regard," he said.

Speaking of local lingo, that membrane around the corn kernel where it attaches to the ear may be called red dog by some, but they will always be bees wings to Garrabrant. Whatever you call them, he's looking forward to seeing them fly soon. If he delivers grain to be made into poultry feed, he delivers to "the mill." Otherwise, he hauls grain to the elevator.

Weather folklore is rife in agriculture circles. For example, he's heard his whole life that if it rains on Easter Sunday, it will rain the next seven Sundays. Garrabrant isn't sure he holds with that prediction, but he takes stock in the caution of "red sky at night, sailors' delight; red sky in morning sailors take warning."

It's not that he's superstitious about starting a new project late in the day, but rather that he knows his own personality. "I don't like to leave projects overnight because they bother me all through the night. Therefore, I try not to start new things I know I can't finish that day," he said.

"My generation may not think as much about these kinds of things, but they make me think of my grandfather who always told lots of corny ag jokes, such as: 'What do you call a cow on a hill?' The answer: 'Lean beef.'" 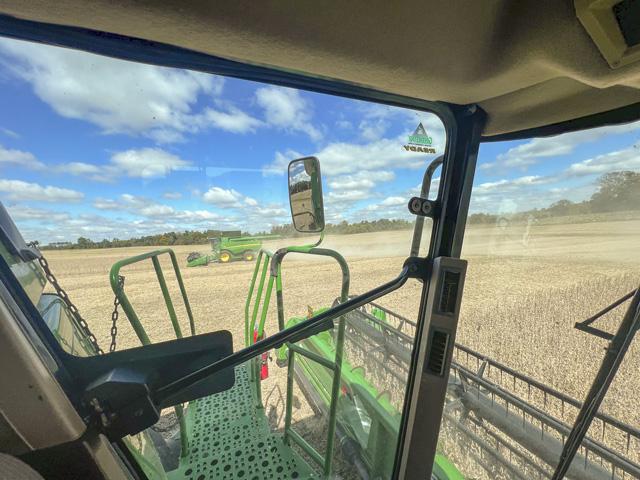