DECATUR, Ill. (DTN) -- Luke Garrabrant's holiday started early this year when wheat ripened enough to begin harvest before the calendar rolled to July. Wheat yields were also high enough to give him another reason to celebrate.

Picnics and parades sound nice, but they are not his focus in the coming days. "I associate July 4 with wheat harvest and straw baling and that's exactly what we'll be doing this year. We've been so busy playing catch up with planting and other operations that it feels good to have something happen on or ahead of schedule," said Garrabrant, who farms near Johnstown.

On the other hand, Marc Arnusch's cereal crop is a little delayed this year in eastern Colorado. However, there's no shortage of other seasonal commitments. The farmer and his crews will be sidedressing and tending to crop irrigation chores this holiday weekend. However, the nearby town of Keenesburg will explode in a giant display of fireworks on July 3.

"For some, this is a holiday where they slow down, but this is the time of the year when we tend to accelerate," Arnusch said.

Arnusch and Garrabrant report in each week as part of DTN's View From the Cab project. This week they give an update on crop conditions and talk about how community factors into their lives and patriotic values.

This week Marc Arnusch was putting in some sweat equity trying to get ahead of the heat. As silage corn was sidedressed with nitrogen, another tractor followed closely behind putting down gated irrigation pipe.

"Heat in July isn't anything new. It's just that the crop is starting to show it, so we've been laying pipe in corn and milo," he said. The hard plastic pipe is split every 30 inches. Gates are opened and closed by hand every 8 to 12 hours, to surge water along the pipe to thirsty crops.

It's a type of irrigation that is both time-intensive and physically demanding. "It will put on some calluses and build some fortitude," Arnusch said. "We have a landlord that still prefers this irrigation system. For the most part, this area of the country has moved to sprinkler or drop nozzle irrigation systems," he said.

Irrigation is needed since Keenesburg has been hard-pressed to gin up a shower of late. DTN ag meteorologist John Baranick said the showers popping up off the Rockies have mostly been landing just to the west.

"That is a typical feature of thunderstorms in the summertime. Sometimes they stay parked over the Foothills, sometimes they drift eastward. Keenesburg should have chances all next week, but that doesn't mean they'll get hit by any of them. Temperatures at least do not look like they will get too crazy, but will still be in the lower 90s," Baranick said.

Arnusch said those temps are driving wheat and barley toward the finish line. "I figure we're about two weeks away from barley harvest and maybe 10 days away from wheat harvest," he said on July 1. "There are times we are sitting in the seat of a combine on the fourth, but not this year.

"We're scouting fields and not seeing anything too problematic in milo or corn. We've seen a few Russian wheat aphids in one barley field, but are below threshold so far," he said. Wheat yields are expected to be below normal due to early drought conditions, but Arnusch remains optimistic for yields on his other crops.

Communicating what the farm is about to the community around him is important to Arnusch. "We live in a place that rallies around our youth. Our community holds the only non-taxpayer funded fair and rodeo in Colorado," he bragged.

The farm is a frequent sponsor in some of those fair events. As a seed business, they also promote community through knowledge day tours of the farm plots. At age 26, Arnusch became president of the Colorado Corn Growers Association -- an affiliation that gave him a taste of leadership in a variety of capacities with Farm Bureau and other boards as his career has progressed.

Having the freedom to speak out on behalf of his industry and his family farm is something he holds dear. "Perhaps because I'm first-generation American and know my grandfather and father immigrated here to have those freedoms," he said.

For example, he's currently part of a lawsuit with four other farms that is suing the Colorado governor over a bill that passed the state legislature allowing labor unions permission to come onto farms to talk to employees. "In our view, this allows for legal trespass," Arnusch said. "It is unfortunate we have to take the lawsuit route, but at least there's a system in place to disagree and let the court of law decide."

"Sometimes we think there's too much government involved in those decisions, but we have the freedom to say so. My Dad and his family didn't have that in Europe," he noted.

"I do occasionally kid my Dad by asking if the train he boarded in New York harbor when entering the country stopped in Iowa? There are other farming areas that fascinate me. But then I look around and think about the life and great business we've carved out here.

"That's worth remembering occasionally," he said.

When Luke Garrabrant's low-management wheat field averaged 80 bushels per acre this week, he could hardly wait to turn the header into his intensively managed fields. This is soft red winter wheat country and after a soggy spring and delayed planting, the yield was like an elixir for the young farmer's spirit.

The field he harvested did not have fungicides applied and was running around 13.5% moisture. "If you'd asked me earlier this spring, I would have said this was going to be a late harvest because everything seemed delayed," he said. "But we've had quite a bit of heat early this spring and this wheat really came on."

Disease pressure has been light to non-existent, Garrabrant said. He expected wheat he'd yet to harvest, which had a fungicide application, to be cleaner yet.

With no on-farm storage, Garrabrant has an hour's drive to the nearest sales outlet for wheat. This year he has an interesting basis market scenario to consider. "I have one outlet that has drying capacity that has been 40 under and in another direction I have a milling company paying 40 over.

"I'm hoping these next fields will be the quality to make grade and that I can capture that basis at the miller," he said. However, experience has told him that grading is tough and it's a long haul to the other facility should a load be rejected for a whiff of garlic or another quality factor.

For corn, the old measuring stick of "knee-high by the fourth of July" won't be hard to muster this year, despite late plantings.

"We are seeing some corn curl up during the heat of the day. If we don't get any of these pop-up showers that they are talking about this weekend, I feel like we are flirting with a drought," he said.

Ag meteorologist John Baranick said Johnstown could be on the cusp of the dreaded "flash drought" that is showing up in other parts of the Corn Belt.

"A front will be near the area all week long and some showers will be hit or miss here as well. I have higher confidence that at least one day next week will see some rain, but they could get a shower every day or get completely missed," Baranick said.

"Drought has been popping up around the eastern Corn Belt over the last couple of weeks and soil moisture in Ohio has been declining. The region could be headed toward drought if they can't pick up any showers out of these chances and temperatures remain as forecast. Those effects could pop up quickly," Baranick said.

What's also changing quickly in Garrabrant's area is the structure of the local community. Large industry has moved in and grown what was once a smallish town into a city. "I've found myself wondering how to get more involved and how involved I can afford or not afford to be," he said.

"I guess it's best to say that I'm feeling my way and know I'd like more of that when the time is right," he said. The local high school FFA chapter has a five-to-six-acre plot that he plants, sprays and tends each season. He supports youth through the local livestock auctions.

This holiday, he simply hopes the day affords him a moment to sit on the farmhouse porch surrounded by family to watch fireflies light up the night sky.

Freedom doesn't get much sweeter than that. 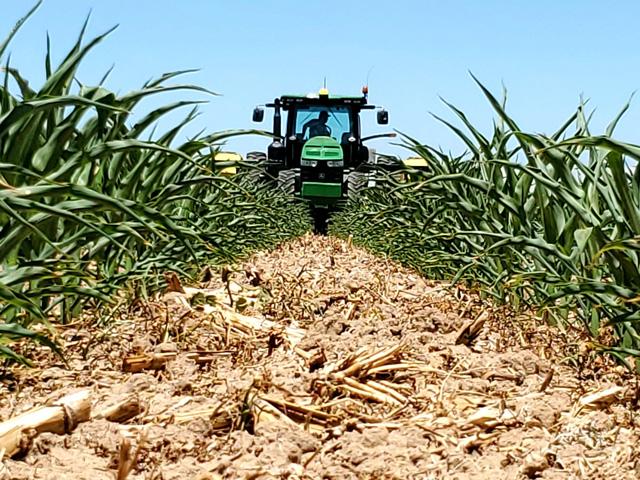