OMAHA (DTN) -- Safety on rural roads is a shared responsibility between vehicle and farm equipment operators, according to the National Center for Rural Road Safety (NCRRS). Those utilizing rural roads need to be proactive with safety, and any death or injury from crashes is unacceptable, the group says.

These were a couple of the key points made during the "Rural Roadway Safety" presentation during National Farm Safety and Health Week, which was Sept. 19-25.

Those operating vehicles might not realize how slow farm equipment is moving. It only takes five seconds for a car going 55 miles per hour (mph) to approach farm machinery going 15 mph, Sullivan said.

Those operating vehicles on rural roads should prioritize safety. Basic things like putting on seat belts, driving sober, sharing the road and passing with care are all important considerations when driving on rural roads.

"I would discuss safety with your family around the dinner table and know what are important safety practices when driving on rural roads," Sullivan said.

For those operating farm machinery on public roads, there is a list of safety practices to follow.

Sullivan said wheel fasteners should be tight, tires should be inflated to correct levels and mirrors should be adjusted for clear vision. Other safety rules include putting brake pedals together for even stopping, making sure lights are on and working, and ensuring loads are balanced and secure.

A recent study from the Great Plains Center for Agricultural Health of farm vehicle accidents in nine Midwestern states from 2005 to 2010 yielded some interesting findings, she said. Among the finds were accidents happened more often on roads with a 50-mph speed limit or higher, and accidents happened more on busier farm-to-market roads and on roads with smaller lanes or narrow road widths.

"In addition, states with farm equipment with more lights on the implements (saw) the number of crashes were fewer," she said.

Sullivan said speed was a factor in one-third of all rural roadway fatalities. Seventy-two percent of rural crashes happened at 55 mph or higher.

In rural accidents involving a pickup, 60% of the occupants were killed because they were not wearing seatbelts. Most head-on rural roadway crashes happened because of high speeds or not paying attention, she said.

The National Center for Rural Road Safety utilizes the Safe Systems approach, which calls for the elimination of fatal and serious injuries for all road users.

The Safe System approach has six principles of safety. Along with shared responsibility and death and injury are unacceptable, the other principles include humans make mistakes, humans are vulnerable, safety is proactive and redundancy is critical.

"This number needs to go to zero," Sullivan said.

Safety on rural roads faces many unique challenges that more urban roadways do not face, she said.

Many rural roads, for instance, face a lack of resources. Some local governments struggle to have the funds to maintain their roads and bridges, she said.

With an infrastructure bill currently in Congress, Sullivan is hopeful rural communities will see money to improve rural roads. Improved rural roads will most certainly be safer than before.

Rural roads are also more at risk of damage from natural disasters and climate change issues, she said. Sullivan cited how many rural residents in Nebraska had to drive miles out of their way for many months after the bomb cyclone hit most of the state in 2019, destroying rural roads after flooding. (https://www.dtnpf.com/…).

Vehicles with newer safety equipment might not be able to utilize these devices in rural areas because of remoteness (lack of signal). Crashes on rural roadways also face increased response times by first responders.

Sullivan said those who live in rural areas should promote safety in their communities. Individuals can make a huge difference, and everyone should participate in safety awareness efforts, she said.

"Safety culture is beliefs we share with other people in our society groups that influence driving decisions," she said.

For more information about rural roadway safety, click on the following link: https://ruralsafetycenter.org/…. The website has training, education, resources and research on rural roads. 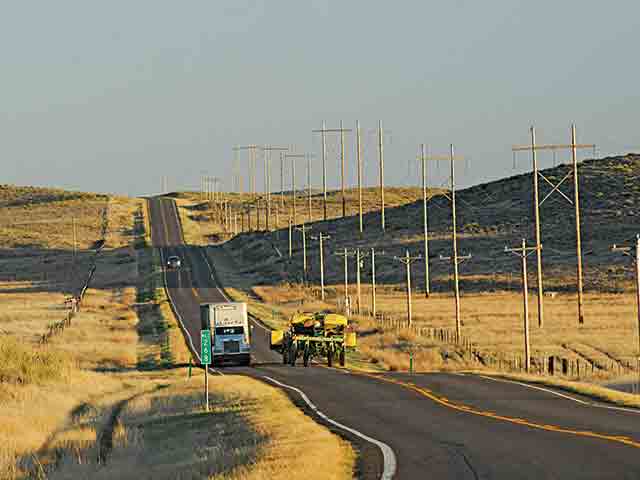