Thanks to Taylor Sheridan's crazy-popular television series "Yellowstone," a whole new generation of city folk is using phrases like "cowboy up" and looking for the perfect pair of boots to wear to their 9-to-5 desk jobs.

The series has a wide range of viewers, but according to Nielsen Fast National Ratings, young adults are a well-represented demographic. Nielsen reported a 52% increase in 18- to 34-year-olds tuning in to watch the first episode of season five (2.53 million live plus-same day) compared to 1.67 million (live plus-same day) for season four's premier.

A report from the University of Montana's Bureau of Business and Economic Research (BBER) and the school's Institute for Tourism and Recreation Research, found the "Yellowstone" series brought an estimated 2.1 million visitors to the state in 2021. Those tourists spent $730 million.

BBER Director Patrick Barkey said that when looking at spending tied to tourism, as well as film production spending tied to the series, the economic impact was significant. Not only was there the $730 million in spending, but some $44.5 million in state tax revenues, 10,200 jobs, and 3,305 more people moving to the state due to increased economic opportunity.

This has been a driver of increases in median prices of single-family homes in areas like Bozeman, Montana. Bill McDavid, a partner at Hall and Hall real estate, said in a recent KOAA article that they were seeing a jump from a price of $660,000 for single-family homes in Bozeman in 2021 to more than $811,000 in 2022. For buyers looking for a real, working ranch, he put the average sale they are seeing now in the $8 million to $10 million range.

Montana isn't where the "Yellowstone" effect ends. Most New Yorkers have never been to a cattle roundup, but many embrace cowboy culture these days. The New York Post has given pages of coverage to topics like cowboy boots, noting they are becoming a common sight on Midtown pavement and calling the look "Westerncore."

A recent Post piece quoted 26-year-old fashion industry worker Lauren Gentry, who lives in the East Village, as saying she wears boots, channeling "Yellowstone's" Beth Dutton, who reminds her of her own grandmother.

"Whenever I put on my boots, I literally feel the strong power of women like Beth Dutton and my grandmother -- my source of strength and style," Gentry was quoted by the Post as saying.

Legacy brands like Wrangler have tied into the brand, as well, with a "Yellowstone" clothing line that includes both clothing and hats.

"Yellowstone" fans are also eager to hear more from any band or singer appearing in the series. That's building a new fan base for a variety of country music styles.

When the band Whiskey Myers, for example, was filmed performing in a bar on the show, it led to nearly two million visitors to their website, crashing the site. After that, the website www.SavingCountryMusic.com reported the group's album went No. 1 on iTunes' country charts.

Probably one of the best-known country music stars to have a part in the series, singer Lainey Wilson, said in a story on www.CMT.com that she and Taylor Sheridan were friends before he wrote a part for her in "Yellowstone."

There are plenty of "Yellowstone" fans who aren't living in a city. Real ranchers and farmers watch the series, and many will be on hand to hear the series' creator speak at the upcoming annual meeting of the National Cattlemen's Beef Association. The group will convene Feb. 1-3 in New Orleans. Taylor Sheridan will be the opening general session speaker, Wednesday, Feb. 1. Boehringer Ingelheim is sponsoring the session.

Sheridan may be known to many today as the Academy Award-nominated writer behind "Yellowstone," but he is also a Texas native, who excels in Western horse performance, competing in reining and cutting. He owns and operates two ranches in his home state. 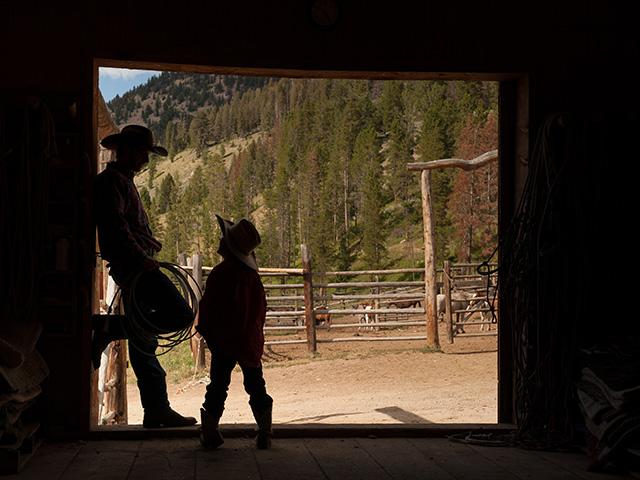