But step into the rows and it becomes obvious that this isn't any typical field of corn. Pull back the shucks on a few ears, and an entire rainbow of color -- blues, purples, reds, oranges and yellows -- is revealed in the kernels. Hinegardner hopes that somewhere among these heirloom corn varieties is the key to a better-tasting whiskey.

"You can make bad whiskey out of good corn, but you can't make good whiskey out of bad corn," he said during a field day event at the distillery in October. "We're trying as hard as we can to find a better corn for whiskey. We're putting a lot of assets in that direction, and hopefully, that's going to make a better whiskey than I've ever made before."

When Hinegardner opened Wood Hat nearly a decade ago, he wasn't looking to become the next mega distillery using a continuous flow still to manufacture whiskey from yellow dent corn, as is standard in the industry. Instead, he opted for a column still that allowed him to separate the "heart" -- the portion of the distillation containing the most desired aromas and flavors -- from the "heads" and the "tails." By perfecting his craft, he highlighted the distinct yet subtle flavors found in heirloom corn varieties such as Hopi Blue, Bloody Butcher and Cateto Orange Flint, creating unique small-batch spirits that whiskey and bourbon connoisseurs appreciate.

"Just like the variety of grapes influences the taste of wine, the variety of corn makes a difference, too," Hinegardner explained, noting that flavors can run the gamut from sweet and fruity to earthy and even spicy. "The problem with the heirlooms has been that we're all kind of guessing as to what makes that blue corn taste different from the red or orange or purple."

At first, Hinegardner, who has a master's degree in agronomy, experimented on his own, attempting to find the corn varieties that were best for distilling. He said it didn't take long for him to acknowledge that he didn't have the time, expertise or resources necessary to adequately evaluate each heirloom.

"We also realized we didn't want to wait three years to see if a corn makes good whiskey," he added.

In 2018, Hinegardner met Sherry Flint-Garcia, a USDA research geneticist based at the University of Missouri (MU) and a member of the Missouri Maize Center. Flint-Garcia's lab specializes in the genetics and consequences of maize domestication and breeding. Soon, the pair was collaborating.

"Sherry is a researcher. She does scientific methods," Hinegardner said. "Before, we were just splattering s--- out here and hoped it stuck to the wall."

Flint-Garcia is coordinating several projects to explore heirloom varieties for various culinary uses. She and fellow USDA researcher Jim Holland launched an effort five years ago to evaluate heirloom varieties from the southern United States. They are now planning to evaluate the roughly 1,000 heirloom varieties contained within the USDA maize germplasm collection. The goal is to grow, characterize and genotype all 1,000 heirlooms to determine how they are related, where they are best adapted to grow and if they contain interesting culinary properties.

Breeding improved heirloom varieties to enhance whiskey flavors is among their research goals. From the germplasm collection, Flint-Garcia selected 50 primarily yellow and white heirloom corn varieties from Missouri to start the Missouri Heritage Corn Project. The goal is to evaluate heirlooms with names such as "Mortgage Lifter" and "Gatepost" for the potential of each to add desired traits for overall composition.

Under the direction of Flint-Garcia and David Braun, an MU professor of biological sciences, MU doctoral student Zachary Traylor is analyzing unaged whiskey created from those 50 varieties, determining the concentrations of various flavor compounds found in each.

"We can make any kind of corn behave like we want using breeding and genetics," she said. "We can fix agronomic deficiencies while maintaining unique corn characteristics. There is so much variability in corn, so many subtle flavors and culinary properties. There's no reason to choose just one."

Last year, Hinegardner started his field trials with 70 different F1 hybrid crosses, including what he described as the largest collection of blue corns in the world. From those, he selected the 12 best to grow out this year, and from that group, three will be selected to move forward.

"We're going to select a blue out of this group, along with red-blue and an orange flint," the 78-year-old said. "We'll create some seed corn, grow it ourselves and sell it to other distillers."

While yield has been the primary driver for commercial corn breeding and crop improvement, Hinegardner said the heirlooms they move forward in the distillery's whiskey lines will be selected on taste first. Yield and other characteristics -- such as whether the shucks fully encase an ear to protect the seed from pests and pathogens -- also are being taken into account.

"These heirlooms may have been left behind, but it doesn't mean they can't yield," he said. "We have a 7-acre patch of blue corn that yielded 125 bushels per acre this year. We'll get the taste right first, then work to improve the agronomics."

Hinegardner believes his fellow distillers can and should pay more for heirlooms that impart the flavors that make their whiskey better. He noted that from one bushel of corn, he can produce about 15 fifths of whiskey. When that bushel is Bloody Butcher heirloom red corn, for example, he sells each fifth for $76. If he gave $18 per bushel for the corn, each $76 fifth would only contain $1.20 of corn.

"We have been too chintzy when it comes to corn," he said. "We need to pay more for corn and get farmers interested in growing that corn. We could pay $100 a bushel, if it's the right corn. The right corn can make us all a lot of money."

Aside from whiskeys made from red and blue corn, Hinegardner also has a passion project in the works to create a bourbon from Missouri Shoepeg, a white heirloom corn.

"I'm going to make Missouri Shoepeg bourbon aged in a Missouri barrel," he declared. "It may not be the best-tasting bourbon, but it might be. Time will tell. It'll certainly be a whiskey that never existed before." 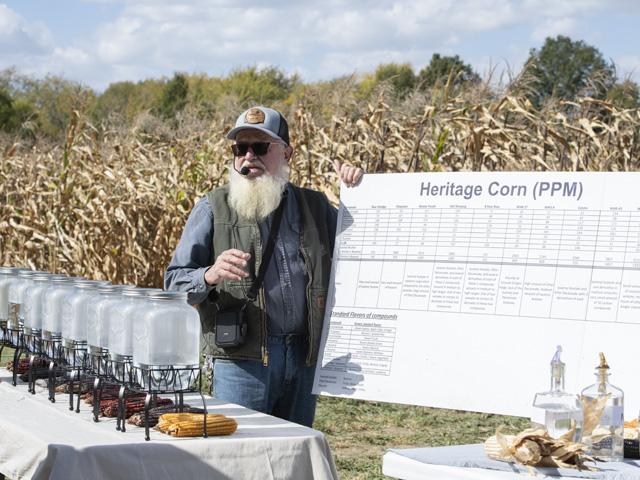