RALEIGH, N.C. (DTN) -- As Congress continues looking at ways to reform the H-2A guestworker program, concerns about guestworkers potentially suing farmer employers are holding up a bill that would allow guest workers to stay in the country year-round and alleviate some of agriculture's farm labor pressures.

Last week, House Republicans joined with a mix of agricultural organizations to call on the U.S. Senate to pass the Farm Workforce Modernization Act, a bill that passed the House on a bipartisan 247-174 vote in March 2021. That bill would eliminate the requirement that temporary farm workers return to their home countries after nine months and instead allow up to 20,000 to receive three-year visas. That would essentially allow H-2A workers to be employed by dairies, pork producers and others who need year-round labor. The 20,000 cap for year-round visas also could increase if the Department of Labor and USDA consider it necessary. Senate talks could adjust that visa limit as well.

The same bill also would legalize potentially hundreds of thousands of farm workers who are now working in the country illegally. These workers would qualify for visas if they continue working on farms. The bill would also require agricultural employers to use the national E-Verify system when hiring new workers to stop the use of undocumented workers in the future.

Shawn Harding, president of the North Carolina Farm Bureau, owns a farm producing strawberries, blueberries, blackberries, and other crops, in Beaufort County, that he is now transitioning to his sons. Harding told DTN in an interview this week his farm is typical of others in the state that have long histories with a lot of their farm laborers. (To see a video from the interview, go to https://www.dtnpf.com/…)

"We've got workers on our farm who have been working there for 20 years," he said. "A lot of them now are citizens, and they live in the United States."

Yet increasing farm labor has been a long-standing challenge for North Carolina, as the state has one of the most diverse mix of farms in the country. Last year, North Carolina farmers used 23,479 temporary workers through the H-2A program, the fifth-largest volume in the country behind Florida, Georgia, California, and Washington, in that order. According to the Department of Labor, those five states account for more than half of all H-2A positions, which totaled 317,619 jobs nationally in fiscal year 2021, the most in program history.

Looking at agriculture's growing reliance on H-2A guest workers, in fiscal year 2011, the program involved only 77,000 jobs on farms nationally.

Harding noted the debate over agricultural labor gets mixed with arguments over border security. "I understand that issue and we need border security. My friends in Texas have shared some real horror stories with me about the situation down there. So, I support that we need some border security; but we also need a legal way for folks to come in and work."

He added that the labor challenges now facing nearly every industry since the beginning of the pandemic have opened the eyes of others around the country.

The American Farm Bureau Federation and its Southern state affiliates that currently rely heavily on H-2A oppose a provision in the bill that would allow H-2A workers to file lawsuits over possible violations of labor laws under the Migrant and Seasonal Agricultural Workers Protection Act (MSPA). Right now, H-2A guest workers are excluded from that law, which grants more labor protections to U.S. citizens who are farm workers.

"That's an area where our policy is extremely clear. We do not support the inclusion of H-2A under MSPA in this manner," Allison Crittenden, AFBF's director of government affairs, told NPR in an interview this week. "So, we want to make sure that folks can be out farming and not dealing with frivolous lawsuits that could result from this."

NPR noted the American Farm Bureau's influence in Washington has been one of the major sticking points in the Senate despite support for the Farm Workforce Modernization Act from several other farm organizations such as the National Council of Farmer Cooperatives.

Harding said the current H-2A program has its problems, particularly due to the provision limiting labor to 10 months. While in Washington, D.C., meeting with other Farm Bureau presidents last week, Harding said he told Agriculture Secretary Tom Vilsack that H-2A largely works for growers in his state.

"Is it perfect? No, it's not perfect. But we've got relationships with people here in North Carolina who have been coming here, as I said, for 20 years to either pick tobacco, pick sweet potatoes, pick strawberries, and they have been coming here for 20 years and they are trained," Harding said. "And then they go back to Mexico or whatever country they're from and spend a couple of months, and they are able to take a lot more money back to that country. The program works. So, let's make it better. But this continued assault on it, I guess that's confusing to me."

Still, the need to change H-2A to allow year-round labor -- a key focus for livestock groups such as dairy -- has led the New York and Utah Farm Bureau groups to support the farmworker bills.

"It is paramount that we have an agricultural guest-worker system that addresses both long- and short-term farm labor needs in this country," David Fisher, president of the New York Farm Bureau, said in a statement last week. "We look forward to a Senate bill that would modernize the federal H-2A program to have a continuous, legal workforce for all sectors of agriculture. This includes opening the system to year-round employees that are needed on farms that milk cows and care for livestock. We must all come together to fix a longtime problem that will support our farms and the American people. Food security is national security."

DTN interviewed Harding this week in Raleigh while attending the Ag Media Summit. Harding noted labor is typically the top issue facing farmers in the state, but this year, high input costs have become the overwhelming focus for most growers.

"For most farmers that I talk to, it's just 'Oh my goodness, the bills I'm getting to put a crop in the ground are something we've never see,'" Harding said. "So, farming has always been risky, but now you've just upped the ante, so to speak, three to four times. That's the immediate, No. 1 concern. Every farmer you talk to you hear about it." 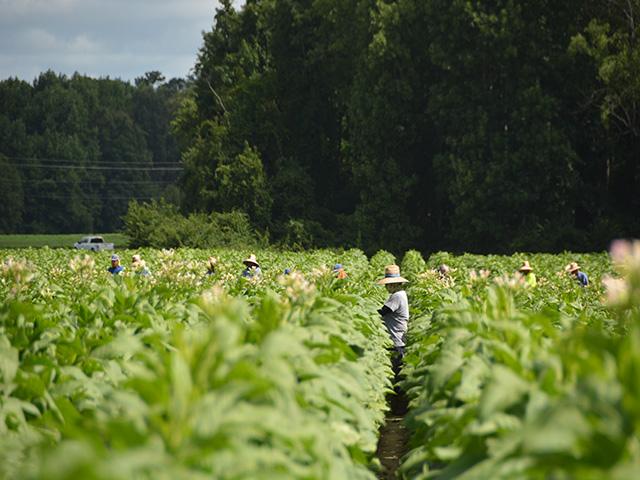