Renewable diesel production and demand exploded recently. That means more soybean oil is needed, which is the most common feedstock used to make the biofuel.

Mixed opinions and analysis exist whether soybean acres and feedstocks can be increased enough to allow renewable diesel production to grow as projected. Questions also exist about how added crush will affect soy exports.

This is the third story in a four-part series -- called Cash in on Soy Crush -- that explores why renewable diesel demand exploded to trigger a rapid expansion of soybean crush. In this story, DTN examines how much more soybeans are needed to increase renewable diesel feedstocks and what this might mean to acreage and yields in the future, as well as export numbers.

Ag consulting firm LCM International projects the United States won't have an issue producing 70.5 billion pounds of feedstocks, up from 19.8 billion pounds in 2020, needed to meet growing demand for renewable diesel. The firm recently released a study, "Lipid Feedstocks Outlook to 2030," commissioned by the Advanced Biofuels Association, to determine if enough soybean oil, used cooking oil, animal fat and grease, canola and corn oil and more would be available.

"In the U.S., it (more soybean acres) will be partly taking land from other crops," Fry said. He added soybean yields will continue to increase as well.

Fry predicted soybean acres will rise to 94 million to 95 million by 2030. Farmers are projected to plant 91 million acres this year, according to the USDA Prospective Plantings report.

DTN Lead Analyst Todd Hultman said that's unlikely, as overall row-crop acres in the U.S. aren't expected to significantly increase. "I think, at the end of the day, we're still not going to get very far away from a 50-50 split on corn and soybean acres."

Fry predicted average soybean yields will increase nationwide to 55 bushels per acres (bpa) within the decade, up from 51 bpa in 2020 and 51.4 bpa in 2021, according to USDA data. He also expected seed companies to work harder to edge up the oil content in soybeans.

Chuck Hansen of Stine Seed, headquartered in Adel, Iowa, said improving yield is always the top priority of the company's breeding program. That's occurring at about 0.8 bpa per breeding generation, he continued.

As biofuel demand grows, Hansen knows the drums are beating louder to increase oil content of soybeans without sacrificing protein as well. He said that isn't easy since the two are inversely related, meaning if oil content is increased, protein often goes down and vice versa.

"In our soybean breeding program, we're analyzing every line that goes into our elite trials, which is the final evaluation before we commercialize a line," Hansen said. "We're specifically identifying lines that will give us higher protein and oil."

Most soybeans grown in the U.S. contain roughly 20% oil and 80% protein, Hansen said. There are varieties with up to 25.5% oil content with adequate protein levels that yield well, he continued. But all those attributes vary based on planting date, geography and other factors.

"We're taking steps to make sure we deliver products to the farmer that will meet their needs," Hansen said.

"We'll raise plenty of soybeans to fulfill new crushing needs," said Lammers, who is the United Soybean Board (USB) secretary. "But it might be that there will be less whole soybeans being shipped overseas."

It's likely whole soybean and soy oil export records won't be broken in the foreseeable future as the crush industry expands and more oil is used for renewable diesel. But soybean meal shipments are expected to soar.

The amount of U.S. soybeans available for export could drop by hundreds of millions of bushels. China, the world's largest soybean importer, currently relies on the U.S. to supply about one-third of its needs. The country imported 3.7 billion bushels of soybeans in the 2020-21 marketing year, according to USDA data, to help feed the world's largest hog herd and its people.

Is China and other soy importers worried that the U.S. will likely have less whole soybeans to sell?

"They are taking notice and asking questions," said Jim Sutter, USSEC CEO, which promotes the use of U.S. soy worldwide. USSEC officials are talking with U.S. soy buyers saying even though U.S. crush is expanding, more soybeans will likely be produced. "We think we'll still have a good, solid supply of soybeans to export," Sutter continued.

He acknowledged soy oil exports will eventually decline. However, he considers the probable change in export dynamics an opportunity. Crushing is a value-added proposition, and the U.S. will eventually have more soybean meal to sell that many countries in the European Union, Southeast Asia and elsewhere crave.

-- Better soybean economics relative to other crops for farmers to attract additional acres.

-- U.S. soybean meal exports could double in the next decade, depending on future soybean acres and how much crush capacity is actually built.

-- Worldwide protein needs will continue to escalate. A market will be available for all the soybean products produced in the U.S.

"More crush is a good thing," Sutter said. "We've been preparing for this for years by promoting the nutritional benefits of soybean meal produced from U.S. soybeans, such as enhanced amino acid profile and energy levels."

"How do (shipping) logistics adapt?" pondered Mac Marshall, USSEC and USB vice president of market intelligence. "It won't happen overnight. I think those are big challenges."

However, Marshall said market signals will prompt companies to adapt. That's already happening. Railroads and others in the transportation chain are working on plans to ensure adequate capacity exists, USSEC officials said.

AGP, a major soybean crusher and soybean meal supplier, recently announced plans to expand and upgrade its export facilities at the Port of Grays Harbor in Aberdeen, Washington. This includes more storage and a new ship loader so multiple Panamax-sized vessels can be filled at the same time. A Panamax can hold more than 40,000 tons of soybean meal, equal to 1.5 million bushels of soybeans, according to the South Dakota Soybean Association.

"With the expansion in U.S. soybean crush capacity driven by the demand for renewable diesel feedstock, soybean meal production in the United States will outpace historical increases in domestic usage," AGP CEO Chris Schaffer said in a statement. "This project will significantly improve speed, capacity, and product availability for the benefit of current and future international customers."

This is the third story in DTN's Cash in on Soy Crush series.

To watch a video of an Iowa farmer talking about how the soybean expansion affects his farm and small biodiesel refineries, go to: https://www.dtnpf.com/….

To hear a Field Posts podcast about the subject, go to https://www.dtnpf.com/… and scroll down to "E99: Soybeans are Crushing It, Literally." 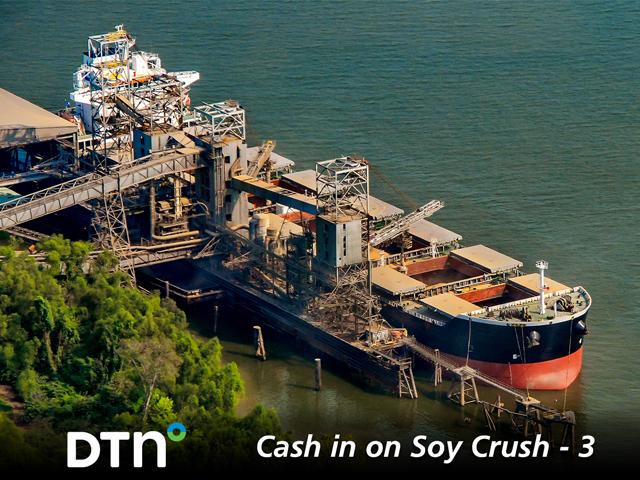