LINCOLN, Neb. (DTN) -- With Brazil's tariff-free quota expiring on Tuesday leading to an increase to a 20% tariff on all ethanol imports from the United States, U.S. Secretary of Agriculture Sonny Perdue told DTN on Friday a deal between the two countries would be announced soon.

The Brazilians let the Aug. 31 deadline pass this week without announcing an extension of the tariff-free quota, essentially allowing a tariff increase. Some media outlets this week reported a tentative agreement has been reached to keep the zero-rate in place until a larger agreement can be reached.

"I'd love to tell you everything I know about that, but I think I want to calm the waters over some of the discussions," Perdue said during a stop in Lincoln, Nebraska, on Friday.

"I think you'll probably be hearing announcements at the first of the week," Perdue said.

"I do consider it positive, I'll say that. I know that Brazil is trying to work with us on that issue. Obviously the 20% tariffs would have been very detrimental to our exports in Brazil. Ambassador (Robert) Lighthizer has been a forceful advocate for U.S. ethanol in Brazil. We're hopeful it'll wind up very positively."

Trade barriers and the economic effect of the COVID-19 shutdown caused ethanol exports to fall by 9% compared to the same time period in 2019.

When it comes to Brazil, China and Colombia, in particular, combined export volumes to those three countries peaked at 129 million gallons in March 2018, but dropped to just 34,000 gallons in July 2020.

"As the July export numbers show, the spread of protectionist trade barriers around the globe is having a very real impact on demand for U.S. ethanol," Renewable Fuels Association President and Chief Executive Officer Geoff Cooper said in a statement.

"And the situation is going from bad to worse, as just this week Brazil eliminated its tariff-free quota for U.S. ethanol and will now charge a 20% tariff on all U.S. ethanol imports. These tariff and non-tariff barriers must be addressed and countered with measures that ensure a fair and level playing field for ethanol trade."

In response to a reporter's question, Trump said, "As far as Brazil is concerned, if they do tariffs, we have to have an equalization of tariffs. You may be seeing something on that very soon."

WORK TO DO ON CHINA TRADE

During his stop in Lincoln, Perdue said he was "encouraged" to see China step up purchases of agriculture commodities in recent weeks.

"They got off to a very slow start," he said.

"It was not signed until February the pandemic hit there, as well as the counter cyclical issues with shipping beans from Brazil during their harvest time in the February, March, April time period. Since the beginning of June, they look like they're trying to catch up, but they got a ways to go, frankly. The numbers recently have been really, really good particularly for Nebraska corn and others that would ship as well as sorghum and the beans to a certain degree. But they've got to keep the pedal to the metal through the rest of the growing year, probably into January '21 in order to meet those kind of deadlines."

In the phase-one trade agreement with the U.S., China agreed to purchase $36.6 billion in agricultural products for 2020.

According to the American Farm Bureau Federation, China purchased about $8 billion of U.S. commodities from January to July. However, China is about 44% behind the pace needed to meet its commitment.

"But they have the capacity to do it, it's a matter of will," Perdue said.

"We sense a willingness to fulfill that commitment. We're hopeful but verifying on a week-by-week basis to where they are. We're in constant communication with the president and USTR trade representative ambassador Lighthizer over where these numbers are and what it's going to take to meet the goals.

"We are encouraged by the fact in many of the underlying technical non-tariff barriers they've been pretty good about trying to resolve those, which will help us get to those numbers if they continue to buy. 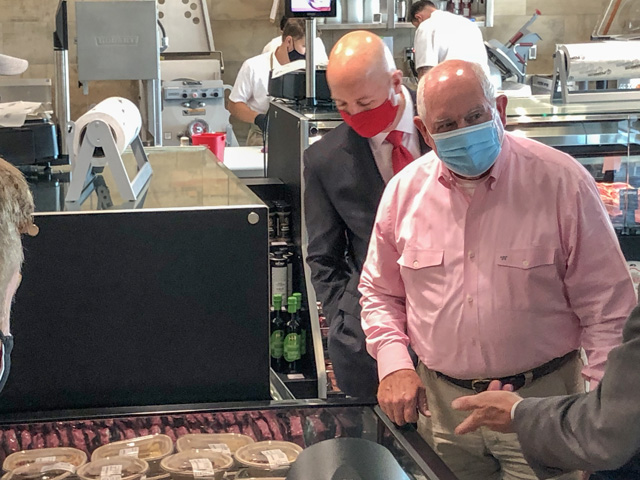