October was dry in many primary U.S. crop areas, including the Eastern Midwest and specifically the Ohio River valley. Precipitation totals in the Ohio Valley were no more than half the normal totals. This lack of moisture was a big contributor to low water levels on the Mississippi River system.

Precipitation for October at four major weather recording sites on the Ohio River -- Cincinnati, Ohio; Louisville, Kentucky; Evansville, Indiana; and Paducah, Kentucky -- shows amounts which are less than half the normal totals. Cincinnati recorded 0.99 inches in October, only 30% of the normal 3.35 inches. Louisville's 1.54 inches was just 42% of the normal 3.72 inches. Evansville logged 1.37 inches in October, a mere 40% of the average 3.39 inches. And Paducah's October precipitation at 1.90 inches was 48% of the normal 3.99 inches. A storm system during the final days of October brought the majority of precipitation; otherwise, October 2022 could possibly have entered history as the driest October on record.

That lack of moisture showed up in drought assessments as well. The U.S. Drought Monitor indicated that drought in the Ohio Valley showed intensification of as much as three drought categories during October. Ohio Valley drought conditions declined from mainly zero drought at the end of September to widespread Severe Drought (D2) at the end of October. (The stages of dryness on the Drought Monitor are: D0 Abnormally Dry; D1 Moderate Drought; and D2 Severe Drought.)

Going into November, the weather pattern is not offering much in the way of significant precipitation to boost the Ohio River volume. Late-week forecast precipitation suggests no more than one-half inch over the Ohio Valley, and indications are that precipitation totals during the first half of November will be near to below normal. Such a trend indicates that the low-volume contribution from the Mississippi system's largest provider will continue to lag during the balance of this year and into early 2023. 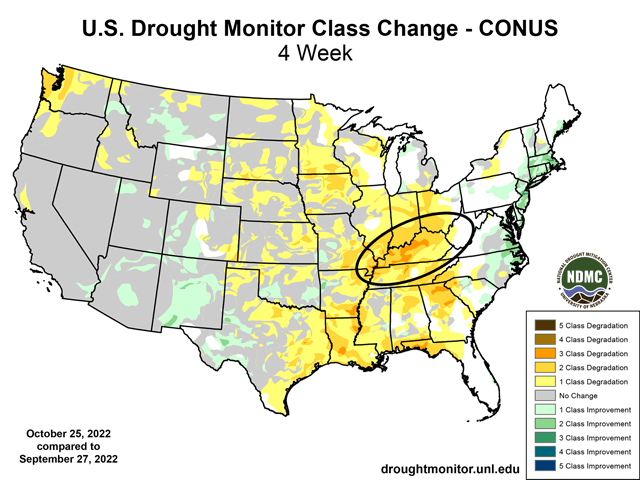