OMAHA (DTN) -- Cooper County in Missouri was already dealing with extreme drought conditions as a farmer near the town of Wooldridge was harvesting his crop on Oct. 22.

Normally, temperatures would be in the mid-60s Fahrenheit, but that day it was in the high 80s, was more than 20 degrees above normal, very close to the record high of 88 F set in 1899.

As he worked, the farmer's combine suddenly lit the field on fire. Winds and low relative humidity -- less than 40% -- fanned the flames so they spread quickly, into the town of Wooldridge as well as Big Muddy Fish and Wildlife Refuge. Interstate 70 was closed for two hours because of smoke during the fire.

According to Jim Gann, speaking for the Cooper County Fire District, 3,000 to 4,000 acres were estimated to be burned and in the town of Wooldridge, almost 25 buildings were destroyed or damaged -- about half the small town -- leading to several families being displaced. American Red Cross set up an emergency shelter to help them. Buildings that were saved included the post office, the Wooldridge Community Club and local Baptist church, according to Associated Press.

Cooper County Fire Protection District Assistant Chief Russell Schmidt told media that no one was killed, although several people were treated for burns. One person was taken to the hospital with non-threatening injuries.

More than 30 crews from various agencies, including fire departments from other communities, helped fight the fire through the night and bring it under control. Some of the firefighters remained on the scene on Oct. 23 to keep controlling hot spots as stronger winds moved through the area, prior to some rain relief.

"This week, a storm system is bringing widespread rainfall to central Missouri. The DTN forecast is calling for a total of about 3 inches of rainfall from this system. Temperatures are quickly plummeting from the mid-80s to the lower 60s. Additional rainfall will be possible this weekend, but should be much lighter," said DTN Ag Meteorologist John Baranick.

Cooler, wetter conditions with a strong storm system moving across the Midwest early this week will delay the harvest but also help lower the wildfire risk rural areas are facing this fall.

OTHER FIRES IN MIDWEST

The Wooldridge wildfire wasn't the only fire in Missouri or in other Midwest states.

The National Weather Service said temperatures on Oct. 23 in Nebraska were 18-25 degrees above normal, and in some cases were expected to break records set in the late 19th and early 20th centuries.

AP reported that the winds gusting 60 mph contributed to wildfires that led to several evacuations that day in eastern Nebraska as well as western Iowa; the fires destroyed some homes and injured two firefighters south of Lincoln. Two grassland fires had started south of Lincoln and pushed north -- Hallam's 300 residents were ordered to evacuate, as well as rural residents of southern Lancaster County and northern Gage County. In Lancaster County, cattle also needed to be moved.

Meanwhile, there were also some evacuations near Wisner, Nebraska in Cuming County, and in Harrison and Montgomery counties in Iowa because of wildfires.

Farmers turned to social media, especially Twitter, to report machinery and field fires they were dealing with.

Loran Steinlage (@FLOLOfarms) who owns and operates a farm near West Union, Iowa, posted Saturday on Twitter two pictures side by side of his combine on fire and the burnt remains of it later. "Great way to cap off a rather sucky week ... Someone said I need to file a report with @JohnDeere ... I hope this works. My guess is she's terminal. How it started -- and how it finished," he tweeted.

Matt Myers (@myers9matt), who farms in Geneva, Nebraska, late last week showed a picture of flames and heavy smoke billowing from his combine. "Not the way we wanted the last day of harvest to go but at least we were done. #harvest22 will be one to remember 10/18/22," he tweeted.

Iowa State University Extension warned in a press release just how fast a fire can spread: "A fire can double in size in less than a minute. Burning embers blown downwind can spread a fire well beyond the control of your fire extinguishers in just seconds."

ISU encouraged people to create emergency plans. "Fires may start from plant materials that have smoldered unnoticed for 30 minutes or more. The ignition source for field fires may have been the earlier passing of a truck, tractor or combine. Flames aren't apparent until additional oxygen is supplied, perhaps by a gust of wind. Harvest crews and neighbors may want to discuss a plan for emergency tillage of a firebreak should that option become advisable."

Baranick said fires are more likely to spread when it is hot, dry and windy.

"These three conditions are typical of a fall season and it is not surprising that every year we read about or see pictures of combines or other equipment on fire during harvest. One point that is a bit atypical of this time of year is just how warm and dry it has been over so much of the country," he said. "Drought has steadily increased across the Plains for much of the summer and fall and over the past several weeks has spread east of the Mississippi with regularity as well.

"In fact, the amount of the country that is in some form of dryness or drought on the U.S. Drought Monitor is at the highest percentage of coverage in the map's history, going back to early 2000," said Baranick.

"A few cold fronts have moved through the country lately, causing stronger winds, but also coincide with lower temperatures. To get the stronger winds with higher temperatures and drier air, stronger storms moving out of the West and deepening in the Plains are what is needed."

Looking at this week's storm to start the week, he noted, "The upcoming pattern will allow more of these strong storm systems through early November. The pattern will switch to a more stable one for the end of November, though stronger cold fronts could still cause some stronger winds with colder conditions." 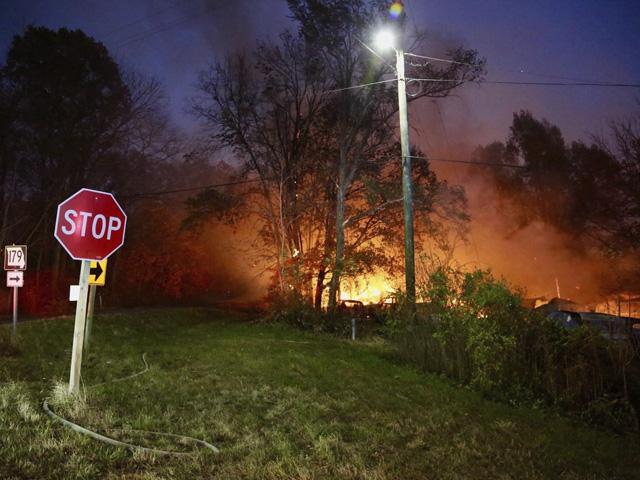