The past week offered two striking examples of the impact of this year's drought. One is a historic economic number; the other is the loss of an iconic gathering place in the heart of the Great Plains.

Sunday, October 2 brought the outbreak of a very damaging wildfire at the Halsey, Nebraska National Forest. The Associated Press reports that the fire, named the Bovee Fire, covered 24 square miles at its largest extent. The fire destroyed the main lodge and cabins of the Nebraska State 4-H Camp, as well as an observation tower in the Nebraska National Forest. In addition, a volunteer firefighter suffered a fatal heart attack while battling the fire.

Losing most of the state 4-H camp facilities is bringing a deep emotional wound to many people who found an oasis for learning and enjoyment at the camp location.

"Since its dedication, the camp has reached over 30,000 young people through fall and spring outdoor education programs that focused on environmental education, skill development, and the capacity for life-long learning," a statement from the Nebraska 4-H council notes. The camp at Halsey had been running since 1963.

An example of the sense of emotional loss was summarized by John Hansen, Nebraska Farmers Union president, in an email to DTN. The state Farmers Union had its own youth camp at Halsey for more than 20 years.

"Strong and lasting friendships were forged at that camp. Parents told me our camp helped change their kid for the better. Our camp sparked a desire that took them in a more positive direction," Hansen wrote. "The landscape was great, the setting was great, the food was always good, the cooperative and team building activities we did were unique and wonderful."

For a more bottom-line drought impact, USDA's Small Grains Summary at the end of September showed just how extensive the drought damage was to the

Great Plains hard red winter wheat (HRW) crop. The total U.S. HRW wheat crop size, 531 million bushels, was down 29% from 2021. But key central and southern Plains states were worse. The Kansas HRW output dropped 33% from a year ago; Nebraska was down 36%; Oklahoma was down 40%; Texas was down 47%; and Colorado was down 49%.

A key contributor to these harsh conditions is the effect of a multi-year La Nina in the equatorial Pacific Ocean, where ocean temperatures around the equator have stubbornly hung in at around 0.8 degrees Celsius to 2.0 degrees C below normal for months. The jet stream track with La Nina favors dry conditions in the central and southern sectors of the Great Plains. That definitely held true during this past summer. Forecasts continue to point to La Nina remaining through the rest of the fall season and through the winter 2022-23 season.

Recovery from the 2022 drought will be challenging. It will take time for moisture to recharge the moisture in wheat fields; that time is extended by the continued La Nina. And the thousands of youth, adults and families who grew up and were emotionally recharged in a Sandhills forest have a firebrand on their memory after yet another extreme weather and climate event. 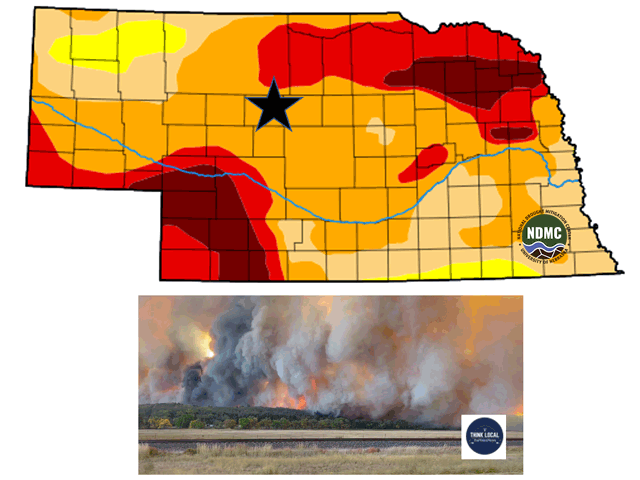