A post on social media from Haskell County, Kansas, pointed to a stark example of the impact of extreme drought and high crop irrigation demand in the 2022 year. "(The) well is basically out of water now. Been very limited for the last 7 years. Down to 100 gallons per minute and the well is pumping a lot of sand," the producer wrote.

A check with Kansas water and climate experts confirms that the account of wells running dry is valid and happened this year to more than just one grower here and there.

"It has been a very difficult year; one that rivals what we saw in 2011 and 2012," said data scientist Blake B. Wilson of the Kansas Geological Survey (KGS) in an email to DTN. The years 2011 and 2012 were also bad drought years, and there is a straight connection between drought and the wells going dry. "Since irrigation accounts for 95%+ of the (water) usage, it is highly correlated to precip," he said. "As precipitation goes, so does pumping, and in turn, the rates of declines in the aquifer."

The aquifer in question is the Ogallala Aquifer, the source of much irrigation water and the lifeblood of row-crop agriculture in the southwestern Plains. Aquifer level declines during the farming year are sharply revealed in analysis of index wells, where the depth to find water is monitored and recorded. A review of an index well in Haskell County shows that by late August, the distance from ground surface to the aquifer had deepened to almost 400 feet. KGS's Wilson has seen that before, "... where the water table drops 100 feet during the irrigation season," he said.

Not all the irrigation wells in the southwestern Plains have gone dry. Some wells have much more available water, due to variances in the underlying bedrock, "which looks more like an egg crate than a bathtub," Wilson noted. But the depletion of water supply is significant. "This isn't new and has been ongoing across much of west Kansas this summer," said climatologist and Kansas Mesonet network manager Christopher "Chip" Redmond.

The end of the growing season meant turning off the irrigation wells, and water table levels have shown some recovery. However, forecasts through the next 12 months indicate mainly below normal precipitation amounts for the southwestern Plains, suggesting next year's irrigation demands could again result in sand versus water at some point in the season. Meanwhile, the field where the well went dry in this crop year 2022 yielded only 15 bushels per acre of corn at harvest time. 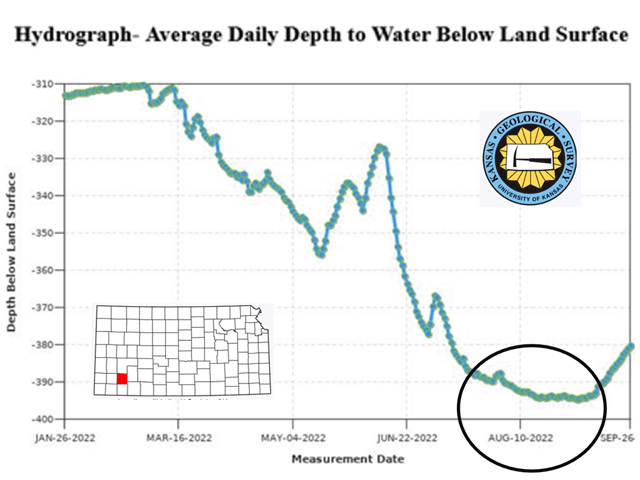