BOONE, Iowa, (DTN) -- The ranking member of the House Agriculture Committee committed to getting a farm bill done in 2023 if he takes over as chairman of the committee, and he criticized a GOP budget plan that calls for cutting farm programs.

Rep. Glenn "GT" Thompson, R-Pa., ranking member of the House Agriculture Committee, was among a group of Republican House members at the Farm Progress Show on Wednesday talking about their plans for the farm bill and criticizing the administration for spending, inflation and environmental regulations such as those involving pesticides.

Republicans are projected to capture the House in November elections. Thompson would be faced with balancing Republican plans to cut federal spending with desires from farm groups pitching proposals to raise reference prices for commodities, which would require more funds for the farm bill safety net. Thompson said his staff has been looking at the success of the Dairy Margin Coverage (DMC) program to see if there is a way to create a similar program for crops. DMC, though, operates similarly to crop insurance in that dairy farmers pay higher premiums for higher protection levels.

During COVID, dairy farmers "were helped based on the margins," Thompson said.

Thompson also criticized a House GOP group, the Republican Study Committee, for a proposed "Blueprint for America" budget plan that would make significant cuts to federal programs, including the farm bill commodity programs, conservation programs and crop insurance. Thompson said the RSC plan would not become the backbone of the farm bill despite roughly 170 GOP members being part of that group.

"This is not the first time the Republican Study Committee has put out something stupid when it comes to agriculture," Thompson said, calling the blueprint "bad messaging." He added, "If any of those policies were implemented by any administration of either party, it would crush rural America. And frankly, without a robust rural America, people in cities are going to wake up cold, dark and hungry."

He believes a GOP-led Congress could reauthorize the farm bill, noting it only needs "tweaks" in some areas rather than an overhaul.

Thompson repeatedly described rural America as "essential America." Asking about the biggest theme he has heard from farmers, Thompson said "uncertainty," as he rattled off input costs, challenges with crop-protection products, waters of the U.S. and proposed tax changes affecting farmers.

Other lawmakers cited high input costs -- Rep. Ashley Hinson of Iowa pointed to a farmer telling her about input costs being 320% higher than a year ago, requiring more credit to farm.

Rep. Rodney Davis of Illinois said with Republican control the next farm bill would look similar to the past two farm bills with some possible tweaks. A farm bill led by Democrats would have "climate titles and climate issues in every single title" of the farm bill, Davis said, talking about the different sections of the bill.

"It changes the fight. It changes the debate. That what I think a majority change is important to keep the successes we've had," Davis said.

Davis won't be in Congress during the next farm bill debate, having lost his primary to a challenger who had the backing of former President Donald Trump.

Thompson criticized how the current House Agriculture Committee has gone about its business under Rep. David Scott, D-Ga. Thompson said the committee hasn't held enough hearings on the farm bill, especially full field committee hearings. Instead, the committee has held listening sessions by one or two lawmakers.

Thompson added, "Give me an opportunity to lead the Ag Committee and the farm bill doesn't become a climate bill."

The 2018 farm bill is set to expire at the end of September 2023. That would pressure Thompson and a new majority to get up to speed quickly to avoid extending the current farm bill next year. Thompson said that could be done, even as he was calling for an aggressive set of field hearings and oversight of current USDA programs.

"The only option is to do our job," Thompson said. He added, "Our most important goal is to get it done before it expires."

While Agriculture Secretary Tom Vilsack said the $19.5 billion for conservation programs in the Inflation Reduction Act gives Congress more flexibility to write a farm bill, Thompson criticized the funding that was passed on a partisan basis. He said he does not know how those funds will help or affect the farm bill. He also said the funds could end up as a "slush fund for the Ag secretary" without oversight.

"It's just concerning and it complicates the farm bill process," Thompson said.

Lawmakers also questioned EPA's registration and treatment of pesticides such as atrazine and dicamba. "Now they are coming out against atrazine," Hartzler said, after pointing to issues with a rare beetle in her district. Thompson said before the committee works on the farm bill he intends to push the House next spring to reauthorize the Pesticide Registration Improvement Extension Act.

"They (EPA) are using science in their decisions, but it's political science," Thompson said.

Steve Censky, CEO of the American Soybean Association, in an interview with DTN at the show, said ASA's policy platform for the farm bill calls for protecting crop insurance and increasing the low reference prices for soybeans, which remains at $8.40 a bushel.

"We know we need more resources for the farm bill to increase reference prices," Censky said. "Even during the depths of the trade war with China we didn't trigger a payment. So what kind of safety net is that?"

Censky said farmers would also like to see another voluntary update of base acres, pointing out there are some farms where only 30% to 40% of their crop acres fall under commodity programs because of a lack of base-acre updates.

Due to the focus on commodity exports, Censky said ASA also wants to see Congress increase the funding for the Market Access Program (MAP) and Foreign Market Development Program (FMD), neither of which have had a funding boost in at least 16 years.

"Developing foreign markets is so critical for U.S. agricultural overall, but also for the soybean industry," Censky said. 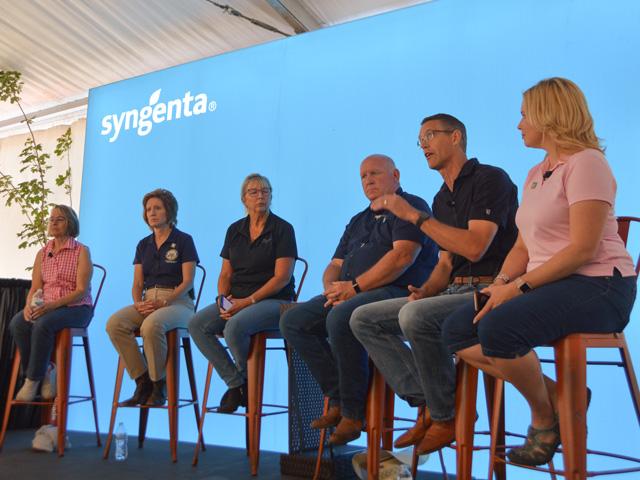