The USDA World Agricultural Supply and Demand Estimates (WASDE) report for August 2022 held few surprises compared to pre-report trade estimates based on a Dow Jones survey. The minor changes in both corn and soy yield and production estimates seemed to be less important than what the future holds in store. With the hot and dry weather that has plagued western and southern Plains corn and soybean crop development, it seems that traders feel the path of least resistance on final yields is lower.

Here's a look at some of the changes in both U.S. and world numbers in the Aug. 12 USDA Crop Production and WASDE reports:

With traders looking for only a small adjustment to the downside on both U.S. corn yield and production, that's just what they got on Friday. The pre-report estimate for national corn yield was close to being on the money, at 175.8 bushels per acre (bpa). USDA instead reported yield as of Aug. 1 to be slightly less, at 175.4 bpa, and down 1.6 bpa from July. Production fell to 14.359 billion bushels (bb) -- about 24 million bushels (mb) less than what traders had expected and a decline of 146 mb from July's production.

The hot and dry weather that covered much of the western and southern Plains has taken a toll on corn yield, with this estimate considered to be the tip of the iceberg without a drastic change in finishing weather. While Illinois, Minnesota and South Dakota are above a year ago, with Iowa virtually the same, it was declines in Indiana, Missouri, Nebraska and Ohio that helped to drive the lower readings.

The result was that ending stocks for corn fell to 1.388 bb, down 82 mb from 1.470 bb and almost right on with trade estimates. Corn feed and residual were dropped by 25 mb, and exports were lowered by 25 mb to account for the smaller crop. The 2021-22 corn ending stocks were raised by 20 mb to 1.510 bb on a cut in corn for ethanol use. On the resurvey of three Northern Plains states, corn acres were raised by just 100,000 acres from July.

It is in the world numbers where most of the changes took place. Following a summer weather pattern that has been referred to as a "100-year drought," the European Union maize, or corn crop, was slashed by 8 million metric tons (mmt) to 60 mmt (2.36 bb). That is still 4.5 mmt above where consultancy Strategie Grains has the crop figured at (55.5 mmt -- 2.18 bb), with the drought and heat wave still ongoing. Other notable changes were a small 500,000-metric-ton (mt) increase in Russia's corn crop to 15 mmt (590 mb), and a 5 mmt increase in that of Ukraine to 30 mmt (1.18 bb). Ukraine corn exports were also increased by 3.5 mmt. I guess that assumes that the UN-brokered agreement for safe export passage from Ukraine continues without a hitch. The EU production problems could easily be a positive for U.S. corn farmers, on increased export potential. World ending stocks of corn for 2022-23 fell much further than the trade had anticipated -- from 312.9 mmt (12.3 bb) to 306.7 mmt (12.07 bb) due to the combined EU and U.S. reductions.

So, no great changes in the supply and demand tables, except for the world numbers. But based on Friday's market action, corn traders are figuring more -- and perhaps larger -- yield cuts to come once September's objective yield results arrive. If the fifth-year results from DTN's Digital Yield Tour, powered by Gro Intelligence, are proven to be accurate, with a national yield as of Monday at 167.2 bpa, Friday's price action could be a forerunner of things to come.

If there was any change in the August versus the July WASDE report, it was probably the mostly unexpected increase in soybean yield and production. With traders expecting a half-bushel fall in yield to 51 bpa and a 35 mb drop in production, USDA instead came out with an increase in both. Soybean yield was pegged at 51.9 bpa, with production up 26 mb versus July, at a record-large 4.531 bb. Harvested acres fell by 300,000 -- the result of the resurvey of the Dakotas and Minnesota in July. The 2021-22 soybean stocks were increased by 10 mb, as exports were cut by a like amount, to 2.160 bb. For 2022-23, with the larger crop, USDA raised U.S. exports by 20 mb to 2.155 bb. Ending soy stocks for 2022-23 rose by 15 mb to 245 mb. The trade was looking for a 230-mb carryout coming into the report.

On the world front, the changes were minor, with China's soy crop moving higher by less than 1 mmt, to 18.4 mmt. China's soybean imports were left unchanged, at a hefty 98 mmt (3.6 bb) -- well above last year. World ending stocks of soybeans rose slightly to 101.4 mmt (3.73 bb) from 99.6 mmt (3.65 bb), only slightly higher than traders had anticipated. Soybean futures were sharply higher pre-report, sold off sharply, and then rallied to finish up over a nickel. South American crops were left unchanged.

It seems that despite what must be termed a mostly neutral USDA and WASDE report, the markets appear to be focused on the "what if" and not the "what is." With mostly hot and dry weather continuing to bake western and southern Plains crop areas, it seems that traders are expecting some surprises in September's more objective yield results. While DTN's Digital Yield Tour suggests that some of the temperature and rain data might indicate worse conditions out there, only time will tell. All three of the markets ended up sharply higher than the morning lows. 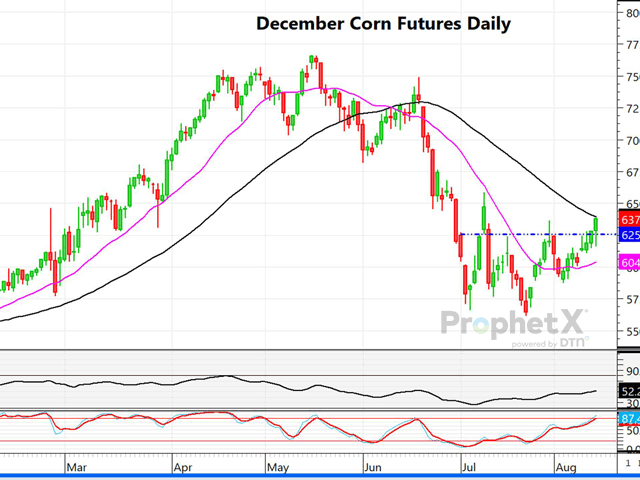